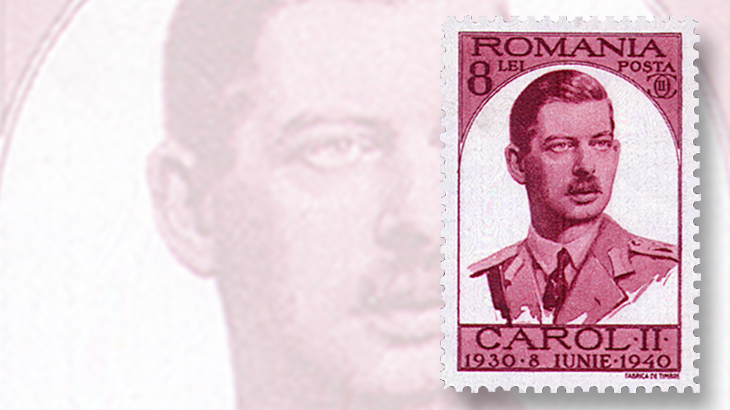 King Carol II of Romania appeared on many of that country's stamps during his reign from 1930 to 1940.

King Carol II of Romania is one of several prominent world leaders who were involved in the stamp hobby as collectors.

He was born Oct. 15, 1893, in Peles Castle, Sinia, Romania, and ruled the country from 1930 until his abdication in 1940. He was succeeded by his son, Crown Prince Mihai (Michael), who became King Michael I.

King Carol II was a stamp collector for most of his life, creating a significant collection that included some very important rarities.

The greatest of all of these was Sweden’s famous Treskilling Yellow, the unique and very valuable 3-skilling stamp of the 1855 Coat of Arms design erroneously printed in yellow orange rather than its proper blue green color (Scott 1a).

According to author Lars Fimmerstad in his book The Treskilling Yellow, the king is believed to have purchased the stamp “as early as 1937,” and finally sold it in 1950 when he was living in European exile.

The king was depicted on many Romanian stamps during his reign. A 1940 semipostal set shows him in uniform on a 8-lei rose brown stamp (Scott B116).