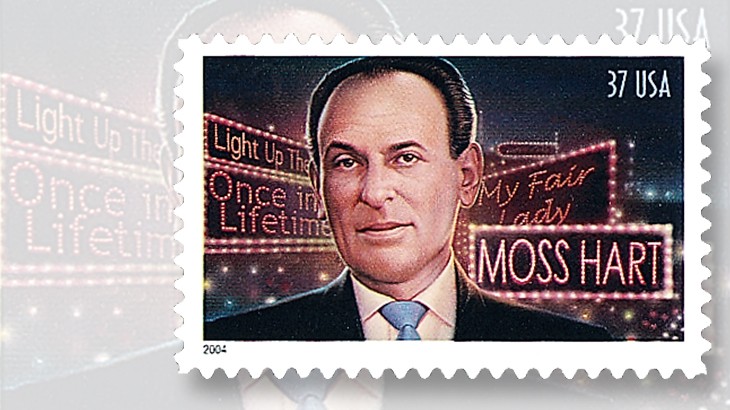 The 37¢ Moss Hart commemorative stamp was issued one day after the playwright's 100th birthday, in 2004.

Hart’s first successful play, Once in a Lifetime, was a collaboration with George S. Kaufman produced in 1930 and made into a feature film two years later. The two men would also create the comedies You Can’t Take It With You in 1936 (winning a Pulitzer Prize), The Man Who Came to Dinner in 1939, and other plays.

Hart continued to write plays into the 1940s and contributed screenplays for Hollywood, including Gentelman’s Agreement in 1947, and A Star is Born in 1954. He was also a successful Broadway director, with the original 1956 production of My Fair Lady starring Julie Andrews and Rex Harrison among his credits.

Hart married singer and actress Kitty Carlisle in 1946; they had two children and remained together until Hart’s death from a heart attack at age 57 in 1961.