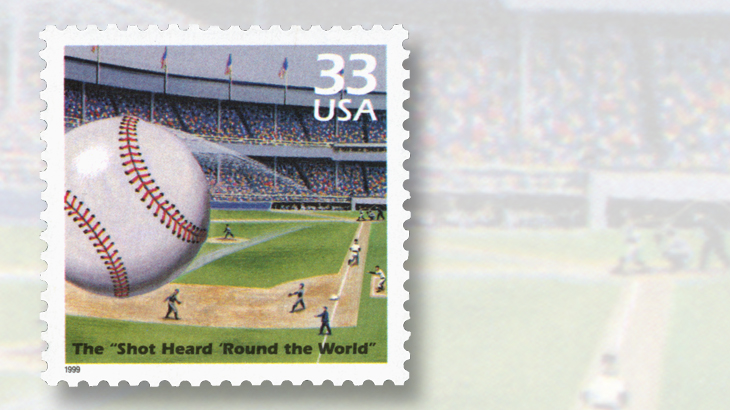 Bobby Thomson became a baseball sensation with the 1951 "Shot Heard 'Round the World," commemorated on this 33¢ stamp issued in 1999.

Professional baseball player Bobby Thomson, known as the “Flying Scot,” was born Robert Brown Thomson on Oct. 25, 1923, in Glasgow, Scotland. He grew up in New York, where he attended Curtis High School in Staten Island.

Thomson joined the United States Army Air Forces in 1942 and served until 1945. His major league debut came Sept. 9, 1946, with the New York Giants of the National League, and he got two hits in his first game, knocking in two runs.

In the bottom of the ninth inning of a decisive playoff game against the rival Brooklyn Dodgers, Thomson hit a three-run home run known as the “Shot Heard ’Round the World,” winning the game for the Giants and sending them to the World Series.

Thomson died Aug. 16, 2010, at age 86. He was still alive when the 33¢ stamp honoring his feat was issued by the U.S. Postal Service as part of the Celebrate the Century commemorative series (Scott 3187c).

The stamp design shows Thomson as a tiny figure at home plate, swatting the ball into the left field seats.