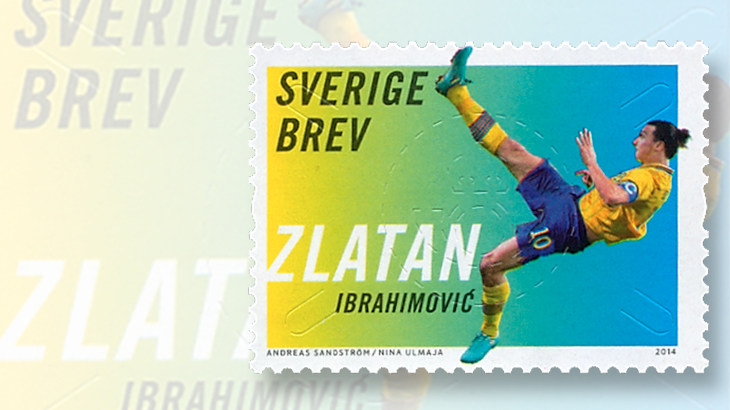 Anyone with a passing interest in international soccer has heard the name: Zlatan Ibrahimovic. He was born Oct. 3, 1981, in Malmo, Sweden.

The longtime captain of Sweden’s national soccer team and relentless striker of the Ligue 1 professional club Paris Saint-Germain has seen changes in his career path in 2016. He announced his plan to retire from the Swedish team and international play, and he left the Paris team to play for Manchester United in England.

Sweden Post issued a set of five letter-rate stamps honoring Ibrahimovic on March 27, 2014 (Scott 2726). Calling him “Sweden’s greatest soccer player of all time,” Sweden Post claimed that people had been requesting a stamp depicting Ibrahimovic “for a long time.”

Since joining the Malmo FF team in 1999, Ibrahimovic has played for several top professional soccer teams, including Barcelona and A.C. Milan, before joining Paris Saint-Germain in 2012.

The Barcelona team won both the FIFA Club World Cup and the UEFA Super Cup in 2009.

As a member of Sweden’s national team in 2012, Ibrahimovic scored all four goals in a 4-2 victory over England, including the final, a stunning bicycle kick executed with his back to the goal from 35 yards out.

“It is a huge honor to be on a stamp, and I am very happy and proud that I have been chosen,” said Ibrahimovic when the stamps honoring him were announced. “I mainly only receive bills, and they seldom come with nice stamps. Maybe things will be different now.”