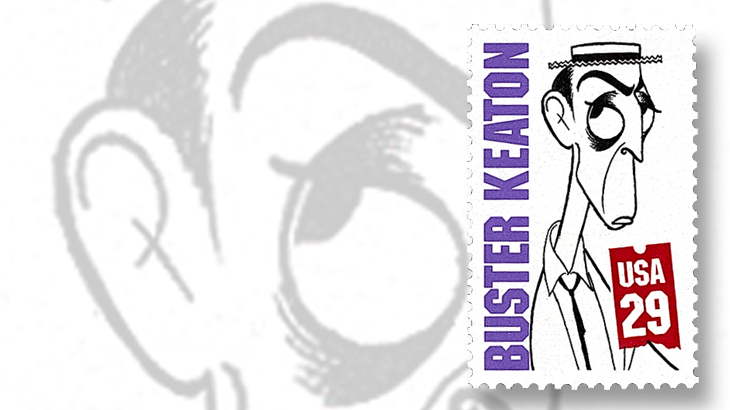 Actor and director Buster Keaton was honored on a 29¢ stamp in the 1994 Silent Screen Stars set.

A treasured American comedic actor and director, Joseph Frank “Buster” Keaton, was born Oct. 4, 1895, in Piqua, Kansas. Keaton became one of the best known actors of the silent film era, creating and acting in remarkable comedies that often showcased Keaton’s deadpan demeanor in the face of extraordinary circumstances.

As a child, Keaton was part of a vaudeville comedy act with his parents, and there he learned to perfect the many nuances of physical comedy. Teaming with actor and director Roscoe “Fatty” Arbuckle in 1917, Keaton began appearing in Arbuckle’s films before producing his own comedies in the 1920s. Many of his early feature films, including The General (1926) and Steamboat Bill Jr. (1928), are considered classics.

Keaton signed a film contract with MGM in 1928 but his success faded as he struggled with both personal and professional setbacks. His fortunes finally turned around in the 1950s with renewed interest in his early work and appearances on television and in film that drew praise from both audiences and critics.