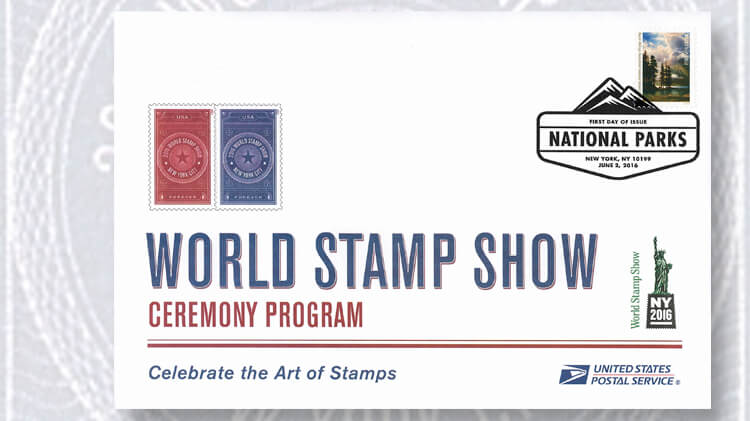 The National Parks ceremony program was enclosed in one of the generic covers used for all the U.S. new issues at World Stamp Show-New York 2016, which was then franked with one of the new Parks stamps and canceled. 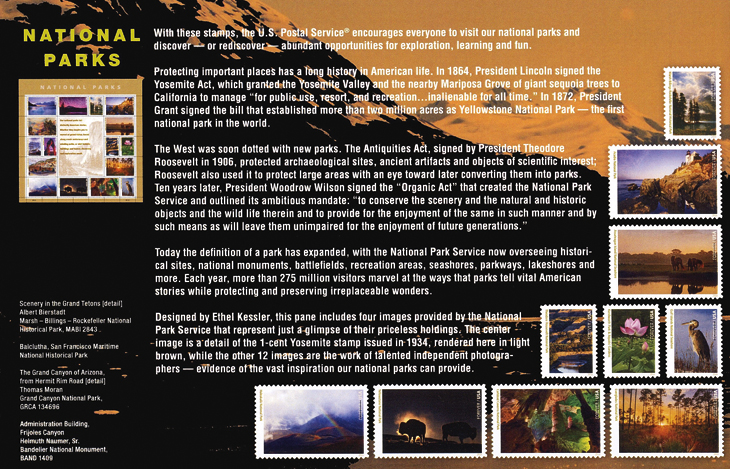 The back of the ceremony program for the National Parks stamps depicts images of the other 10 issues in the new pane of forever stamps. 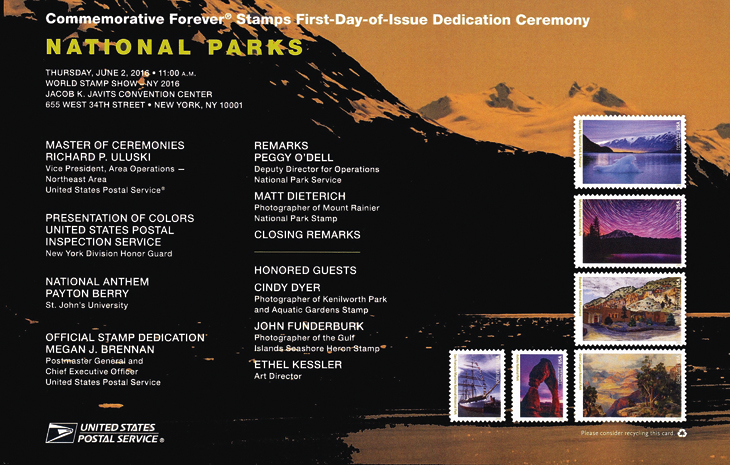 In the now-standard format of official United States Postal Service first-day ceremony programs, a colorful card with a list of participants and images of six of the new National Parks stamps was distributed at the June 2 event.
Previous
Next

It is not often that the United States Postal Service gives a collectible away for free, but it does so every time a ceremony is held for a stamp issuance. The program handed out to those attending a ceremony is prized by many collectors.

As with programs for other events, a first-day ceremony program lists the schedule and the participants at the ceremony. It can be quite simple or rather elaborate: a card, a booklet or part of a larger publication, such as a stamp show program or the guide to a nonphilatelic convention at which a first-day ceremony is being held.

The only real requirement is that the first-day ceremony program list the events.

The earliest-known program specifically for a first-day ceremony is for the Booker T. Washington stamp (Scott 873) issued April 7, 1940, although there are earlier programs for events that also included a first day of issue.

Through the end of the 20th century, many U.S. first-day ceremony programs were produced by event sponsors or by those who had pushed for the stamp’s issuance. Most, but not all, included the stamp or stamps and a first-day postmark.

Then, around the turn of the century, the USPS standardized its ceremony-program format into a card measuring 5½ inches by 8½ inches, enclosed in an often generic envelope franked with the new issue and first-day postmark.

If the new issue consists of more than one stamp, only one random stamp from the set is used.

The first illustration shows an example of a current standard ceremony program: the front of the program for the June 2 ceremony for the pane of 16 stamps marking the National Park Service’s centennial (Scott 5080).

Six of the stamps are illustrated — but no actual stamps are affixed — on that side and 10 are shown on the back, as seen in the second illustration.

The envelope that contained the program appears in the third image: a generic envelope for U.S. stamps issued at World Stamp Show-New York 2016, with one stamp (Marsh-Billings-Rockefeller National Historical Park, Scott 5080c) affixed and canceled.

The card, which does not have a stamp affixed, is the actual program. The envelope, which has the stamp and postmark, is just a first-day cover.

As with many aspects of collecting, first-day ceremony programs became more popular after publication of a catalog: Scott Pelcyger’s 1989 book, Mellone’s Specialized Catalogue of First Day Ceremony Programs & Events. Unfortunately, there has never been another edition of this reference.

In the 1990s, the USPS began selling first-day ceremony programs, singly or on subscription. During the height of their popularity, programs in bulk lots of 25 could be purchased by dealers.

Because it is easy to obtain a new-issue first-day ceremony program without being at the event (the USPS sells them on its website for $6.95, though only for the most popular issues), some collectors “customize” their program, to show that they (and their program) were actually at the ceremony.

Not all U.S. stamps these days have USPS-sponsored first-day ceremonies, and not all have USPS-produced ceremony programs. Some new issues have locally sponsored ceremonies and locally produced programs.

There is an organization for specialists in this field, the American Ceremony Program Society. Interested collectors can email the president, Mark Gereb, at gereb@aol.com, or the secretary-treasurer, John Peterson, jkpete@cox.net, for more information.