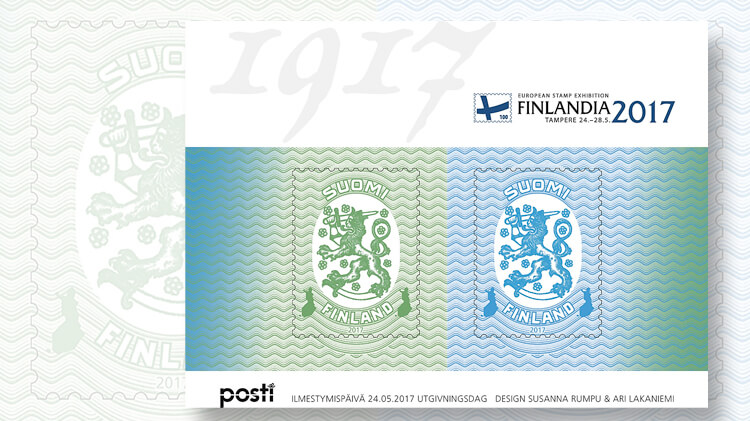 A souvenir sheet to be issued May 24, 2017, the opening day of the Finlandia 2017 European stamp exhibition includes stamp-on-stamp designs of the first stamps of independent Finland. 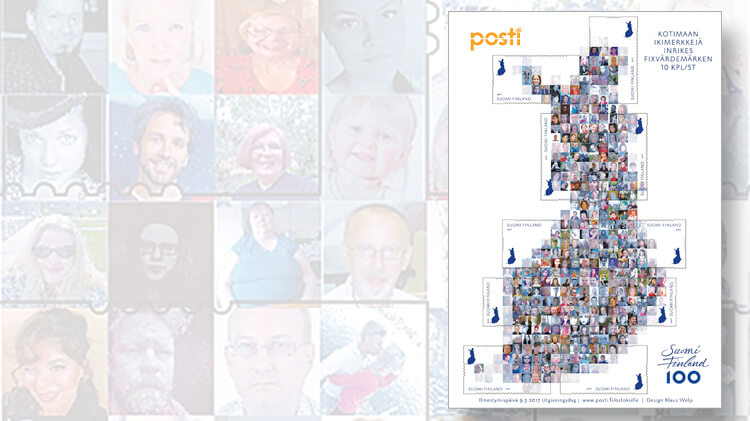 The Finland 100 — the Face of Finland stamp pane to be issued in 2017 shows photographs that were collected from the public. The 10 stamps are combined to form a map of Finland. 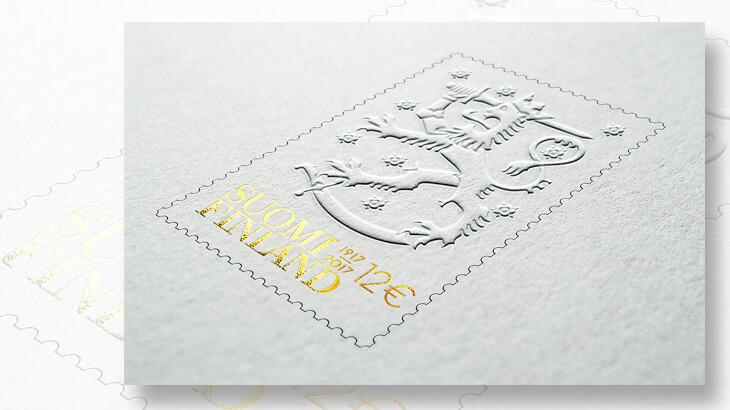 Finland’s coat of arms will be displayed on an embossed stamp that also will include foil and a lacquer coating.
Previous
Next

Finland declared its independence from Russia Dec. 6, 1917, and the kick-off for the year-long centennial will be on New Year’s Eve. Finland’s post office, Posti, is planning several stamps in commemoration of the anniversary.

In announcing the first half of its stamp program for 2017, Posti said that the independence centennial would be the most prominent theme for its spring stamps.

The first of these will be issued May 9. This Finland 100 — the Face of Finland pane includes 10 se-tenant (side-by-side) stamps combined to form a map of the country.

Each stamp shows several photographs of people’s faces. The designs also include a blue map of Finland. This map represents that the stamp pays the domestic rate.

Posti is combining the domestic first-class and second-class rates in January 2017 and has announced that future stamps will have a “no-value indicator depicting the map of Finland, designed by Klaus Welp.”

A souvenir sheet to be issued May 24, the opening day of the Finlandia 2017 stamp exhibition, features two stamp-on-stamp designs of the first Finnish stamps issued after independence, the 1917 Arms of the Republic stamps.

A new 12 Coat of Arms stamp also is scheduled to be issued May 24 in a souvenir sheet of one. Posti reported that this stamp “is embossed, and the design also makes use of foil and UV-lacquer coating.”

The Finlandia 2017 European stamp exhibition will take place May 24-28 at the Tampere Hall, Tampere, Finland.

Several other subjects also will be highlighted on Finnish stamps to be issued during the first part of 2017.

The program will begin Jan. 20 with nondenominated domestic-rate stamps featuring hearts, the flag, a snow castle, and the Lions Club.

To celebrate love and Valentine’s Day, stamps depicting blue hearts will be issued in booklets of five (five different designs).

The new Flag stamp was designed by Ossi Hiekkala.

The stamp showing a snow castle on a frozen lake is part of the 2017 multination Europa series.

In the press release announcing the stamps, Posti said that it selected a snow castle for the design because it had recently issued stamps depicting old castles (Scott 1454, issued Jan. 20, 2014).

A souvenir sheet of two stamps will commemorate the 100th anniversary of the Lion’s Club International, founded in 1917 by Melvin Jones. The stamps and the surrounding selvage picture the organization’s badges from around the world.

Finland will issue its Easter stamp on Feb. 24. The design by Maarit Ailio shows a bunch of pussy willows held together with a green ribbon decorated with white polka dots.

Sharing the Feb. 24 issue date will be a stamp depicting a bouquet of summer flowers. Anna-Mari West, who designed Finland’s 2016 Easter stamp, created this design.

Also scheduled to be issued on the same day will be a stamp picturing Minni Havas’ illustration of a merry-go-round horse, and stamps showing photographs of calm and tranquil scenes in the different seasons. The latter stamps will pay the international rate for postcards and light letters. In place of a denomination, these designs include a globe emblem.

In addition to the already mentioned pane of 10, a souvenir sheet of four stamps featuring migratory birds by designer Erik Bruun will be issued on May 9.

The souvenir sheet contains two nondenominated domestic stamps, plus stamps with denominations of €0.10 and €0.20. The two denominated stamps also will be issued in separate sheets of 15 stamps each.

Saunas and Moomin characters will be pictured on additional stamps to be issued May 24.

The Sauna booklet stamps show the four top photographs in a contest organized by Posti and the newspaper Ilta-Sanomat. A fifth stamp depicts a sauna design from Aland, because this will be a joint issue with Aland.

Moomins, characters created by Tove Jansson (1914-2001), have been pictured on many previous stamps of Finland. The new stamps will commemorate the opening of the Moomin museum in Tampere.

Posti calls the upcoming Moomin issue a “time travel booklet of stamps,” adding that these international-rate stamps will illustrate how the Moomin characters were depicted over the course of time. The first Moomin book for children, The Moomins and the Great Flood, was published in 1945.