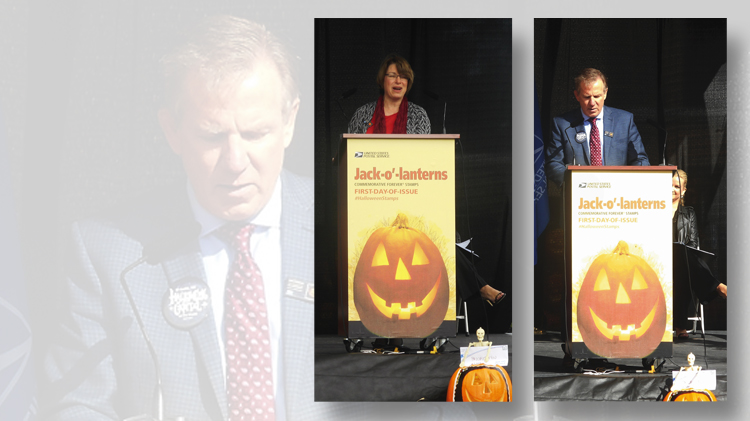 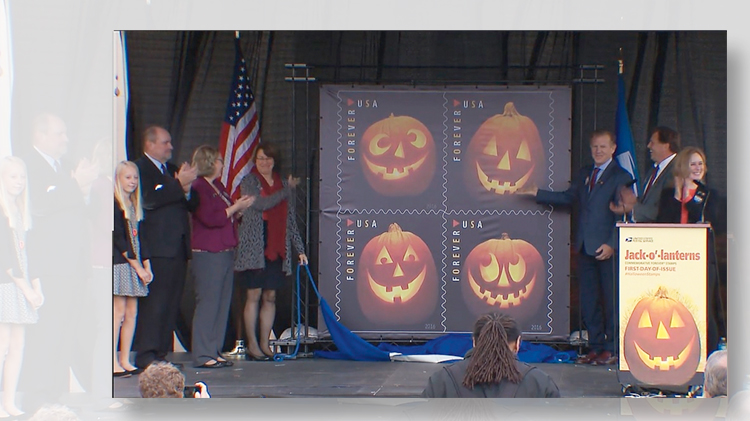 More than 800 people came to City Hall Plaza in Anoka, Minn., for the 11 a.m. outdoor first-day ceremony on a perfect fall day.

Anoka calls itself the “Halloween Capital of the World.” The city of more than 17,000 people is at the north edge of the Twin Cities area.

In 1920, Anoka was home to the first Halloween parade in America.

There are four different designs of the nondenominated (47¢) Jack-o’-Lantern stamps printed in orange and black. The stamps are offered as a double-sided booklet of 20.

At the ceremony, the stamps were sold at one United States Postal Service tent, while postmarks were available at an adjacent tent.

The stamp sales were strong, and the lines were so long that I chose to visit Anoka’s post office a few blocks away to purchase my stamps.

Postmaster Daniel Stark had three clerks selling the stamps at all windows, so there were no delays.

A first-day ceremony program from Postal Service headquarters enclosed in an envelope with a first-day cancel was distributed to those attending the ceremony. The available programs were all handed out, with no extras remaining.

The ceremony was well-organized and moved right along. The Anoka High School band ensemble performed prelude music before the American Legion Post 102 color guard presented the colors and The Star Spangled Banner was played.

Emily Engberg of Minneapolis-St. Paul television station KSTP served as master of ceremonies. A welcome was given by Peter Turok of the Chamber of Commerce.

Sen. Amy Klobuchar, the first woman elected to represent Minnesota in the U.S. Senate, returned from Washington and participated in the event, noting there was no government shutdown this year. She is a native of nearby Plymouth, Minn.

The stamps were dedicated by Joseph Corbett, USPS chief financial officer and executive vice president. At the conclusion of his comments, he was joined onstage by Klobuchar and others for the unveiling of the stamp designs.

As the ceremony ended, a two-story high banner of the Jack-o’-Lantern stamps was unfurled from the top of the Anoka city hall. The band burst into song as the crowd applauded.