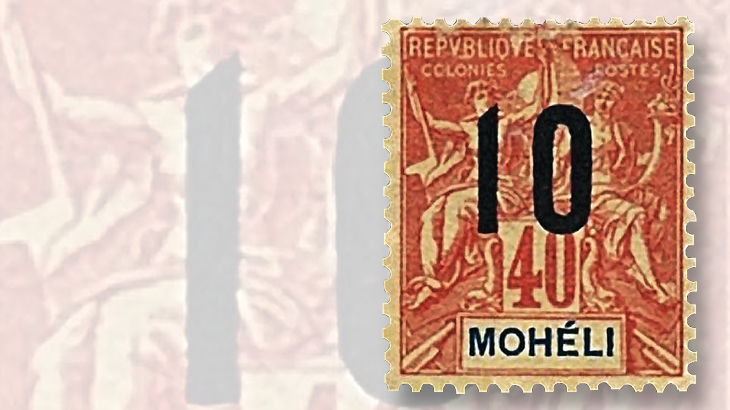 Moheli’s fourth issue of 1912 adds a surcharge of 10 centimes to the original 40c stamp, which is printed in red on yellowish, straw-tinted paper. 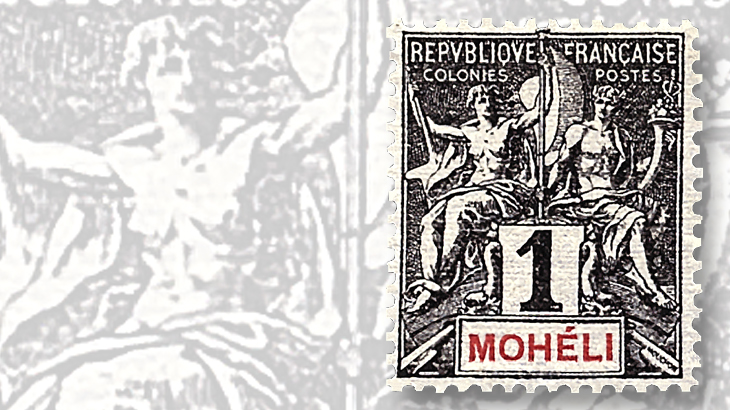 The Indian Ocean island of Moheli issued its first stamp in 1906, a France and Colonies keytype design with “Moheli” printed in red. 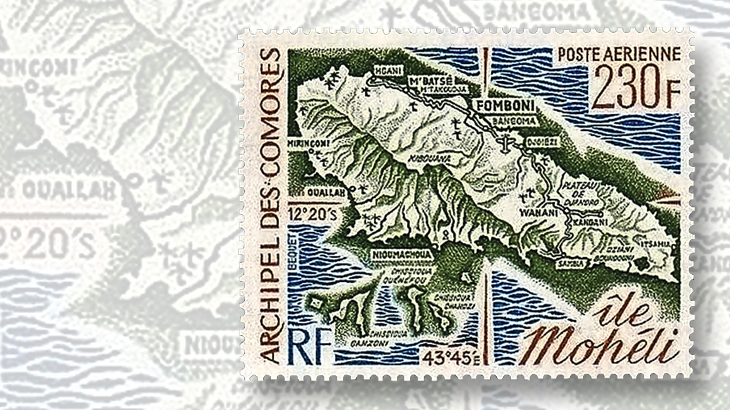 Moheli, a former French colony, is one of the islands in the Comoros archipelago. A map of Moheli makes up the design on a 1975 Comoros 230-franc airmail stamp. 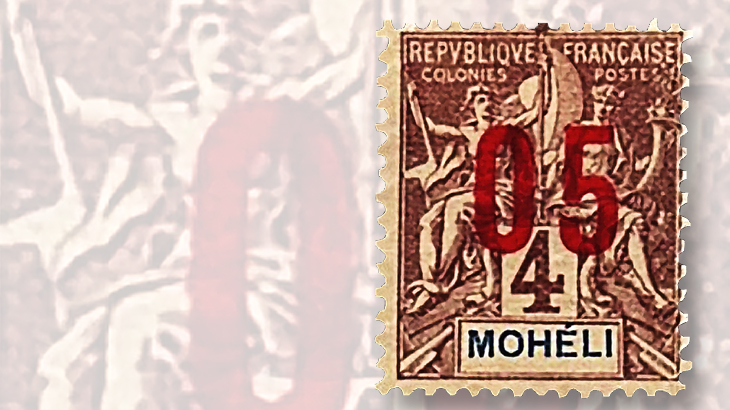 Beginning in 1912, Moheli used remainders of its earlier stamp issues, boldly surcharging them with new denominations to meet current rates. 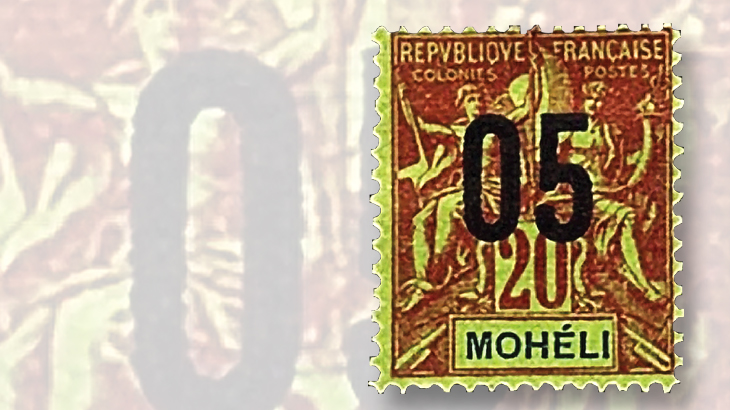 The second of the 1912 Moheli issues added a black surcharge of 5 centimes to the original 20c stamp. The original Navigation and Commerce design is in red ink on green-tinted paper. 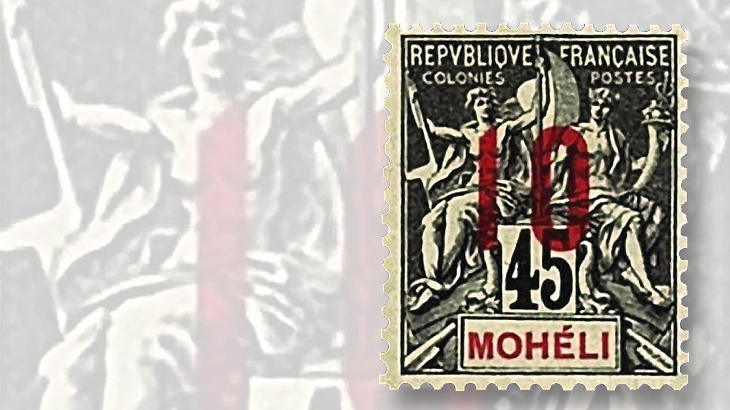 The 10-centime-on-45c Moheli issue of 1912 is printed on paper tinted gray-green.
Previous
Next

It is always a big surprise to attend a stamp show, paw through a dealer’s stock and find some stamps from a place you have never heard of before. It is exciting, and you can almost hear the stamps saying, “Buy me!”

Recently I came home with a few Moheli stamps, and they became the latest additions in the stamp album.

But where is Moheli?

It took some digging to find out its location and to learn more about what it is like.

Moheli lies within an Indian Ocean archipelago on the southeast side of Africa, and is the smallest (81 square miles) of several remote volcanic islands in the Mozambique Channel.

The island became a French protectorate in 1886, and the sultanate was eliminated in 1909 when France annexed Moheli.

Today Moheli is among the islands that make up the nation of Comoros, and a map of it appears on a Comoros 230-franc airmail stamp of 1975 (Scott C68).

My next step was to check out Moheli in the Scott Standard Postage Stamp Catalogue, and that provided a nice surprise: The Scott listings for Moheli take up only a single column and, happily, almost all 22 major varieties fall within the realm of “affordable.” The exceptions are the high-denomination Scott 16, and two expensive minor varieties: 21a, with the “Moheli” overprint doubled, and 21b, the “Moheli” overprint tripled.

This means that Moheli stamps make a compact and probably attainable collection.

The first 16 issues for Moheli were created from France’s Navigation and Commerce design keytype stamps. This design was the work of artist Louis-Eugene Mouchon, intended for stamps of France’s colonial territories and used in those regions beginning in 1892.

“Keytype” refers to a basic design used for stamps of two or more of a country’s colonies, with a blank space in the design where the name of the pertinent colony can be added for its issues.

The first issue of Moheli, from 1906, is the 1-centime black stamp printed on lilac-blue tinted paper (Scott 1). It is a good example of a keytype stamp. “Moheli” is printed in all capital letters in red in the space at the foot of the design.

Except for Scott 4, 5 and 7, which are not on tinted paper, the 16 stamps in the 1906-07 series are printed in different ink colors and on different tinted papers, giving the group quite a colorful and attractive appearance.

The second group of Moheli stamps was issued in 1912. These stamps are all surcharged with either 5 centimes or 10c on the colony’s previously issued Navigation and Commerce keytype stamps.

This surcharging used up the remainders of the stamps originally issued in 1906-07. (A footnote in the Scott Standard catalog states, “The stamps of Moheli were supposed to have been superseded by those of Madagascar, January, 1908,” but this did not happen.)

The third illustration here shows Scott 17, the first of the 1912 issues: a 4c Navigation and Commerce stamp surcharged “05” in carmine ink. The colony name is in blue and the paper is of lavender tint.

The next stamp (Scott 18) is surcharged in black, 5c on 20c, using the base stamp that is printed in red on green-tinted paper, with “Moheli” in blue. The green-tinted paper makes the red ink of the Navigation and Commerce design look brown.

The 20c-on-40c denomination (Scott 20) has “Moheli” in blue and the rest of the printing in red on straw-tinted paper, giving the stamp an orange appearance.

Continuing the colorful array, the 10c-on-45c stamp (Scott 21) is surcharged in red, with the colony name also in red, and the remainder of the printing in black on paper tinted gray-green.

Other islands of the Comoros group also had French keytype stamps, with their respective colony names.

In 1912, all the stamp remainders from those islands’ received the same surcharges as Moheli’s issues, and all of the surcharged stamps could be used throughout the Comoro Islands.

The stamps of Moheli are relatively easy to find, especially the 1912 issues with surcharges. What is not so easy to find is a Moheli stamp on cover, so you can make that a new challenge!

If you complete your Moheli collection and would like to look a little deeper, the Scott Classic Specialized Catalogue of Stamps and Covers 1840-1940 goes into greater depth than the Scott Standard catalog to describe and list surcharge spacing varieties on the six stamps of Moheli’s 1912 issue.

Listings and values are provided for stamps that have wider spacing between the figures of the surcharge, and in each case those surcharge varieties have greater catalog values than the standard issues with the narrower settings.

The France and Colonies Philatelic Society can help you with your interest in those parts of the world. Contact corresponding secretary Joel L. Bromberg, Box 17, Narrowsburg, NY 12764-0017; or check out the website.