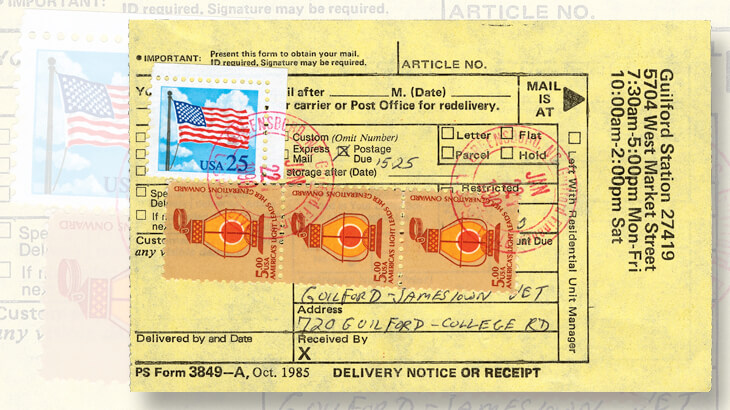 A strip of three $5 Lantern stamps pays most of the $15.25 postage due on this U.S. Postal Service form for “Delivery Notice Or Receipt.” The form served as the customer’s receipt for payment once the stamps were affixed and postmarked. 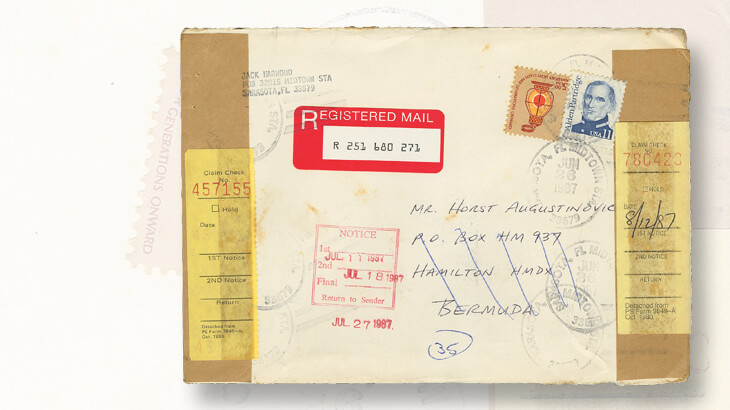 Numerous postal markings on the front and back (not shown) of this $5 Lantern registered cover sent June 26, 1987, from Sarasota, Fla., to Hamilton, Bermuda, show that delivery was attempted twice before it was returned to the sender on July 27. The sende 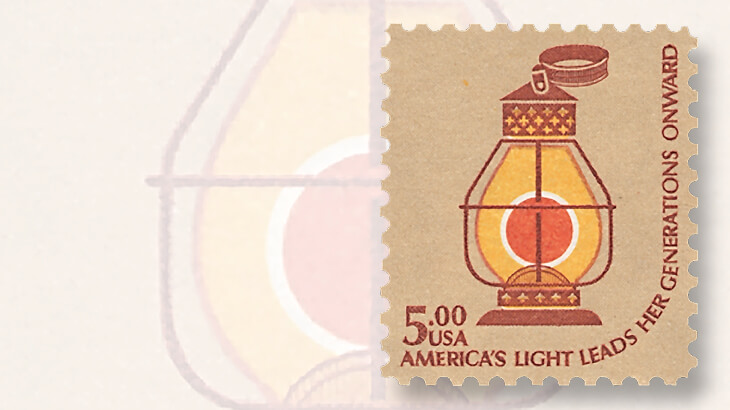 The $5 Railroad Conductor’s Lantern of the Americana series was officially issued Aug. 23, 1979, at the American Philatelic Society’s Stampshow in Boston, Mass. 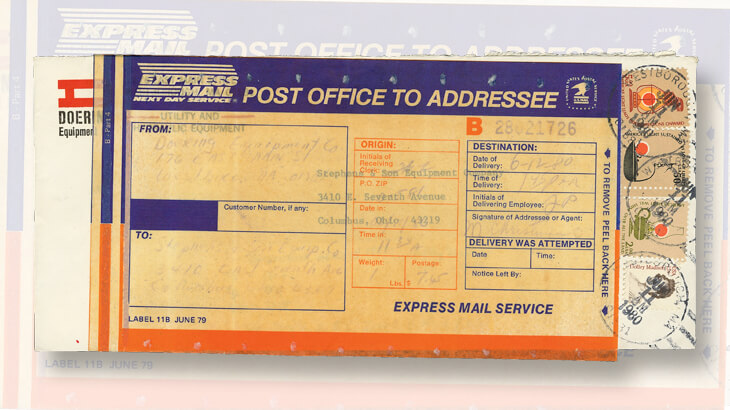 This Express Mail cover, sent from Westborough, Mass., to Columbus, Ohio, in 1980, required $7.65 postage because it was sent to a Zone-5 destination. A single $5 Lantern combined with 50¢ and $2 Americana stamps and a 15¢ Dolly Madison to pay the postage
Previous
Next

When I was a budding collector in the late 1970s, I saved my allowance for a number of weeks so I could buy a set of United States Americana definitive (regular-issue) stamps.

At the time, I lived in Springfield, Va., which meant a short trip to the philatelic window at the post office in nearby Merrifield.

How vividly do I recall waiting in line for my turn to look through the clerk’s stock book of stamps.

Each page held a single Americana denomination, and I carefully selected one of each, beginning with the 1¢ Inkwell and Quill (Scott 1581), and finishing with the top denomination in the then new series: the $5 Railroad Conductor’s Lantern (1612).

Even then, I was particularly drawn to the three dollar-denominated stamps in the series. Adding them to my collection provided a pleasant sense of accomplishment.

I explored the $1 Rush Lamp and Candleholder (Scott 1610) in the April Dollar-Sign Stamps, followed by the $2 Kerosene Table Lamp (1611) in the May column.

On July 3, 1979, the U.S. Postal Service announced that “the new $5.00 regular stamp in the Americana series will be issued August 23 in Boston, Massachusetts, during Stampshow 79, the annual philatelic exhibition of the American Philatelic Society.”

Both offset and intaglio (engraving) were used to print the $5 Lantern. Four colors were used: tan, red brown, yellow and orange.

All colors except red brown were printed using offset: tan for the background, and orange and yellow for the stylized flame and lamp chimney, respectively.

Three design elements were engraved and printed in red brown: the lamp, “5.00 USA,” and the inscription running across the bottom and up the right side of the stamp.

Of the three dollar-denominated Americana stamps, the $5 Lantern is comparatively harder to find on cover.

As with the $1 and $2 stamps, it was primarily used to pay postage on heavy parcels or on mailings requiring additional fees for registry and other services.

However, with diligence and patience, one can find the $5 Americana stamp used in more esoteric ways.

Illustrated nearby is one such example, which I added to my collection in 2004.

It is a U.S. Postal Service form for “Delivery Notice Or Receipt” that the Guilford Station post office in Greensboro, N.C., used to alert a customer that postage was due on a batch of mailings.

After the stamps were affixed and postmarked (Jan. 22, 1990), the form served as the customer’s receipt for the postage due payment.

When the Express Mail cover pictured here was mailed in 1980, fees for the overnight delivery service were determined by zones.

At the time, there were nine Express Mail zones. Each zone had a range of miles based on the distance between the airports serving the origin and destination postal facilities.

In this case, the Express Mail cover was mailed June 11, 1980, from Westborough, Mass., to Columbus, Ohio, a distance of approximately 740 miles, which placed it in Zone 5.

The distance between the origin and destination for Zone 5 was greater than 600 miles but less than or equal to 1,000 miles.

Postage for an Express Mail parcel weighing less than or equal to 1 pound and sent to a Zone-5 destination was $7.65.

Because of the size of the Express Mail label, the four stamps used to pay the postage were affixed along the right side of the envelope.

While studying this cover, I fondly recollected that I acquired it in 2009 from the late Richard B. Graham, who for many years wrote Linn’s popular Postal History column.

International uses of the $5 Lantern, while elusive, are out there.

A “Return To Sender” handstamp on the back (not shown) indicates that the cover was “unclaimed.”

A red boxed “Notice” handstamp on the front shows that delivery was attempted two times (July 11 and July 18, 1987) before the cover was returned July 27.

More than two weeks later, on Aug. 12, the cover arrived back in Sarasota. The sender picked it up that same day, as shown by the yellow “Claim Check” stub attached to the right side.