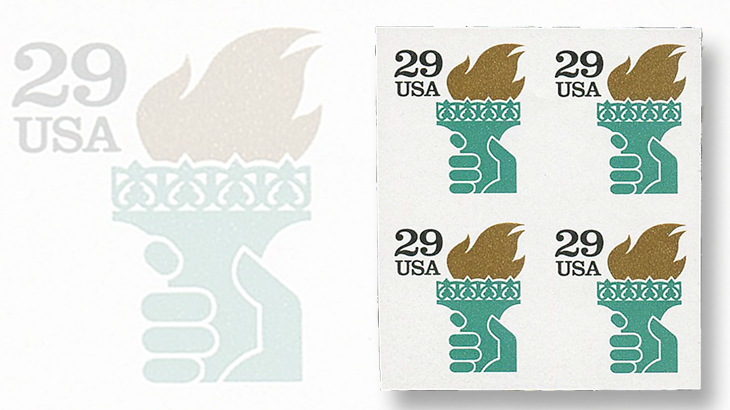 This block of four 1991 29¢ Liberty Torch stamps with all die cuts missing is being offered as part of the Regency-Superior Chicagopex auction taking place in Itasca, Ill., Nov. 18-20. 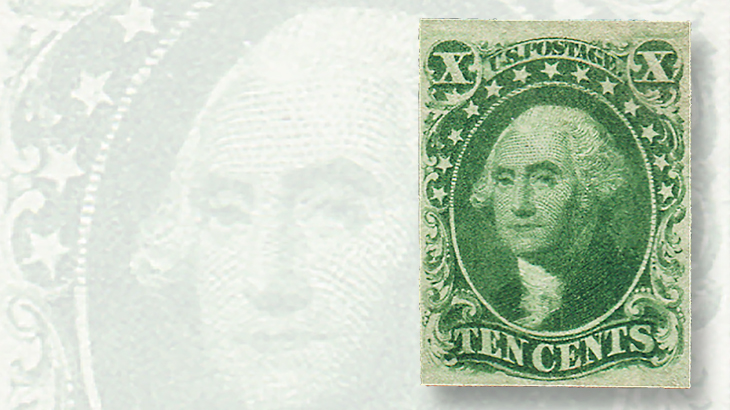 The Regency-Superior auction includes this scarce unused example of the 1855 10¢ green George Washington type IV stamp with clear to full margins all around.
Previous
Next

The Chicagopex show, celebrating the 130th anniversary of the Chicago Philatelic Society, is taking place Nov. 18-20 at Westin Chicago Northwest, 400 Park Blvd., Itasca, Ill. The show is open to the public with free admission.

Windy City gears up for Chicagopex 2016 : The bourse will include 75 dealers from the United States and Europe, and there will be approximately 300 frames of philatelic material on display.

While most Regency-Superior auctions also include a selection of better philatelic errors and oddities, that selection is bolstered in this new sale with material from the estate of Marvin Frey, who for many years was one of the leading error stamp dealers in the United States.

Additional Frey material will be offered in Regency-Superior’s January auction at Orcoexpo near Anaheim, Calif.

“Although Marvin is known primarily as one of the pioneers in the area of popularizing errors, freaks and oddities, he was truly a worldwide dealer, buying and selling entire collections, as well as helping collectors build their [collections] an item at a time,” Regency-Superior said in a tribute to the late dealer.

The images and descriptions of the EFO (error, freak and oddity) lots take up more than 20 pages in the printed Regency-Superior auction catalog, reaching back to 1860 and continuing on into the 21st century.

The presentation is a lot of fun to look through, with classic errors mingling among uncataloged freaks that are every bit as fascinating.

A mint example of the 2000 Exploring the Solar System pane with its five $1 five-sided stamps (Scott 3410) is offered with an unusual bonus: a segment of the round hologram design from the $11.75 Space Achievement and Exploration stamp (3412) affixed.

The neatly cut 5-millimeter fragment shows a bit of the $11.75 denomination from its position at the top of the pane, just above the rings of Saturn.

There are many examples of modern self-adhesive stamps where some or all of the die cutting is omitted, including a rare error of the 2002 34¢ Year of the Horse stamp (Scott 3559a) in a horizontal block of six with all vertical die cutting omitted. One row of stamps has been removed from the piece, but the plate number selvage still intact. It’s offered with a Philatelic Foundation certificate and an estimate of $2,500.

The auction includes some dramatic color-missing errors as well, including a few with all colors missing, such as the 1978 13¢ Carl Sandburg commemorative in a plate block (Scott 1731a) that appears at first glance to be four blank stamps attached to five pieces of blank selvage.

The unprinted stamps are tagged normally, resulting in a slight image known as a tagging ghost that makes identifying the issue possible. The American Philatelic Expertizing Service certificate states, “no engraved impression, all color omitted, black tagging ghost.” Listed but not valued in Scott, it comes with an estimate of $3,500.

For collectors of more traditional material, this auction offers plenty to choose from, including U.S. classics in singles, blocks, and full sheets.

A nice unused rarity on offer is the 1855 10¢ green George Washington type IV stamp (Scott 16), with “deep rich color, clear to full margins all around, unused without gum. A stunning example of this rare issue,” according to the auction catalog description. The recut designs distinguish this variety, and this example is recut at both the top and bottom.

The stamp has a 2016 Philatelic Foundation certificate and is listed with an estimate of $15,000, which matches the value listed in the 2017 Scott Specialized Catalogue of United States Stamps and Covers for the sound stamp without gum.

The international material in this auction includes a substantial exhibition collection of Argentina’s 1917-46 airmail, described as a “detailed multiple award-winning study of history of carriers of airmail to and from Argentina, with emphasis on development and evolution of routes and rates.”

Interested collectors can watch an online video presentation about the Argentina airmail collection.

The full auction is posted on Regency’s website, with online bidding options available.