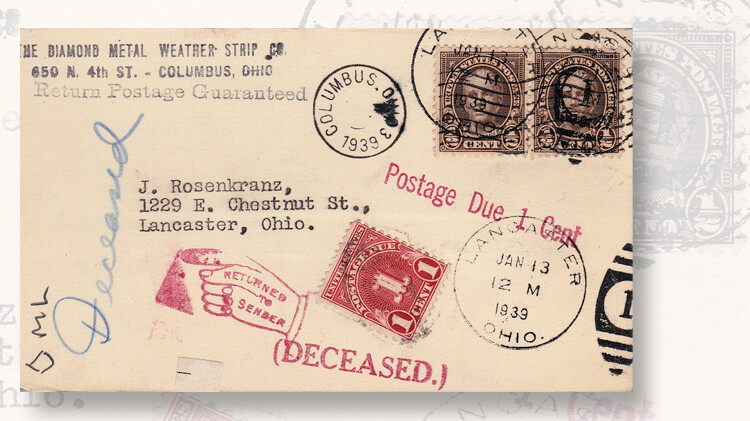 This single nonlocal postcard mailed in January 1939 was undeliverable because the addressee was deceased. It was returned to the sender only because he had guaranteed return postage, and the postage due fee of 1¢ for first-class return service was collected.

My new book, Insights into U.S. Postal History, 1855-2016, contains a chapter that discusses the complex history of how undeliverable postal cards and postcards were returned by the United States Post Office Department. Every few years, something new and complicated was added to the process of how they were returned.

For instance, the Postal Bulletin 18327 of Nov. 18, 1941, announced that, effective Nov. 6, 1941, Section 802 of the 1940 Postal Laws and Regulations was amended such that unpaid, misdirected, unmailable, and unclaimed postal cards and postcards, whether single or double, and whether addressed for local delivery or otherwise, were to be returned to the sender only when they bore the sender’s return card (return address) in the upper-left corner of the address side together with a pledge to pay return postage.

Such cards were to be returned and charged with postage due at the card rate of 1¢ each, to be collected on delivery.

This new set of rules also was mentioned in the December 1941 monthly supplement to the United States Official Postal Guide.

Initially, as of about two years ago, I had located no examples of this kind of returned card from after Nov. 6, 1941, but I am now aware of more than 15 examples.

On the other hand, until recently, I did not have nor had I seen any examples of such a guaranteed card return from July 1, 1924, until Nov. 6, 1941. During this earlier time period, only nonlocal, single cards required such guaranteed paid returns.

Illustrated here is my recent acquisition: the first example of just such a return of which I am aware.

This January 1939 guaranteed single, nonlocal postcard was mailed at the 1¢ first-class domestic surface card rate, franked with a pair of the ½¢ Nathan Hale stamp (Scott 551). It was undeliverable, as the addressee was deceased.

Only because it was guaranteed could it be returned to the sender, “Postage Due 1 Cent.” This payment was collected, as indicated by the 1¢ postage due stamp (Scott J70) affixed to the card, an amount consistent with a first-class return.

As mentioned, the notice for this change was found in a Nov. 18, 1941, Postal Bulletin and in the December 1941 monthly supplement to the U.S. Official Postal Guide.

Thanks to the generosity of the USPS Library (which lent the Postal Guides on microfilm), and the efforts of Tara Murray of the American Philatelic Research Library, the Postal Guides from 1874 until 1954 (including the monthly supplements) are now produced as PDFs (portable document formats) of TIFFs (tag image file formats).

The Postal Bulletin citation can be accessed from my free website, uspostalbulletins.com. It is hoped that the Postal Guides eventually will be made available on the same site.

Tony Wawrukiewicz and Henry Beecher are the co-authors of two useful books on U.S. domestic and international postage rates since 1872. The third edition of the domestic book is available from the American Philatelic Society, while the international book may be ordered here.