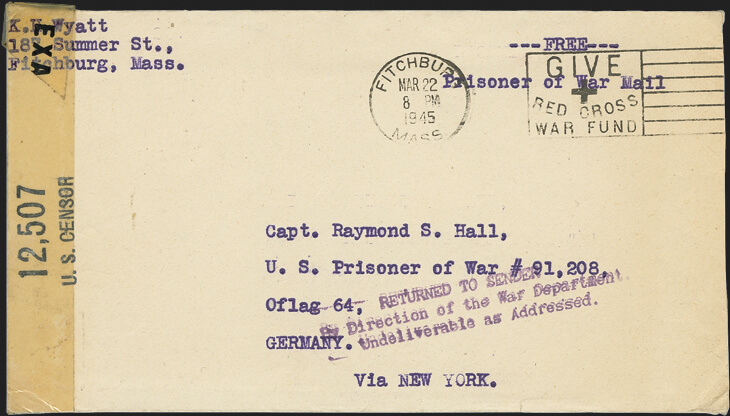 World War II prisoner of war mail, such as this returned undeliverable letter, sometimes had a hard time finding POWs at the end of the war, because they were often moved to avoid advancing Allied troops. The addressee of this letter, Capt. Raymond S. Hal

The heart of the sender of the letter shown nearby must have skipped a beat when it was returned with the notice, “Returned to Sender By Direction of the War Department Undeliverable as Addressed.”

On its way back to Massachusetts, the cover received a June 20, 1945, machine cancel on the back in New York.

The letter was sent March 22, 1945, to prisoner of war Capt. Raymond S. Hall at a POW camp in Poland. A search on the Internet revealed that Capt. Hall was captured by German troops Sept. 19, 1944, in Holland.

Hall was the regimental chaplain for the 502nd Parachute Infantry Regiment, and was sent to a officers-only camp in Poland, Oflag 64. (Information about this camp can be found on the Oflag 64 Association website.)

The Soviets liberated the camp Jan. 23, 1945. But, in anticipation of this loss, the Germans marched those Oflag 64 prisoners who could walk westward to other camps in Poland and ultimately in Germany. Some escaped along the way. Those POWs who made it to Germany were liberated by the 14th Armored Division in April.

Captain Hall’s record shows that he was “returned to military control” on March 19, 1945, but how was a bit of a mystery to me until his obituary was found on the Internet in the archives of The New York Times. He died June 21, 1970.

According to the obituary, Hall was known as “the parachute parson” during the war and was discharged with the rank of major.

It also reports, “Taken prisoner, he was held in prison camps in Germany and Poland for four months before he was able to escape to Russia. After reaching United States authorities in Odessa, he returned to this country.”

I am glad that the return of the letter did not signal an unfortunate end for Capt. Hall. In fact, I hope that news of his repatriation might have reached the letter writer before the undeliverable letter did.