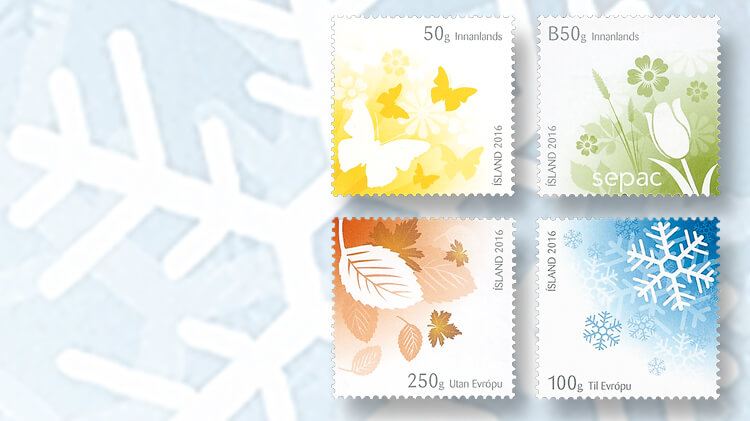 Iceland’s 2016 Sepac-themed stamps feature the four seasons: spring (with the Sepac logo), summer, fall, and winter. They were issued April 28. 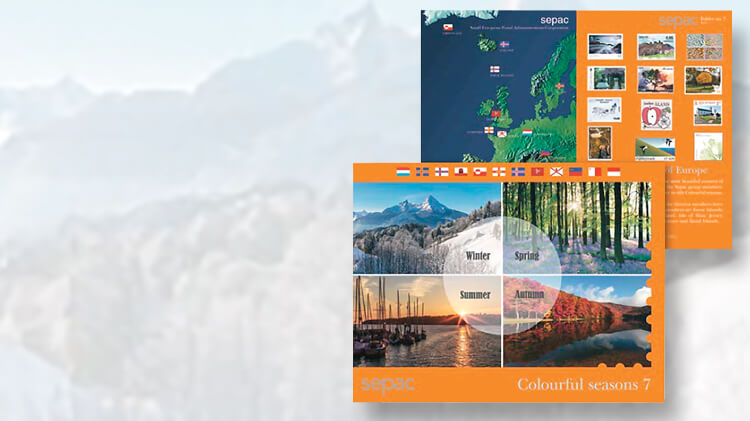 The folder for the 2016 Sepac stamps with the theme of “Colorful Seasons.” 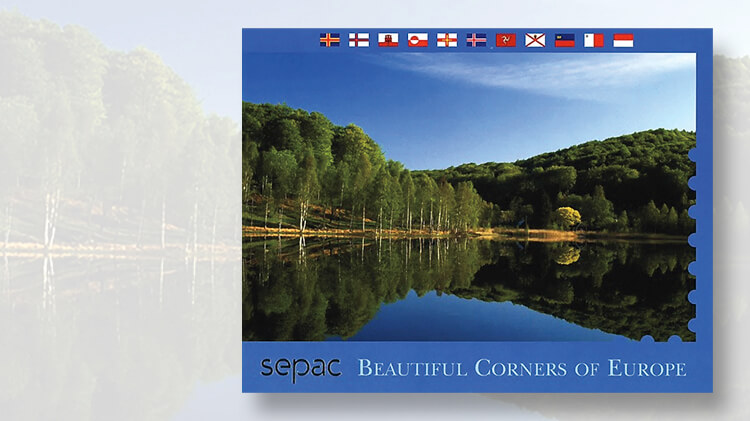 Representatives from several postal administrations across Europe get together for an annual conference called Sepac, which stands for Small European Postal Administration Cooperations.

The goal of the organization and conference is to discuss various philatelic matters of interest to those postal administrations.

Sepac is different from PostEurop, which organizes the annual issue of Europa stamps.

Since then, member postal administrations take turns hosting the conference.

This year, the group met in the beautiful Faroe Islands, a self-governing part of Denmark with its own independent postal administration.

More information about Sepac can be found on its website.

The Sepac members jointly select a theme each year to be featured on stamps bearing the official Sepac logo. These are not joint issues or common design stamps; each postal administration designs its own stamps and selects the issue date. This year’s common theme is “Colorful Seasons.”

The stamps, along with related philatelic items such as first-day covers, are sold separately by each of the postal administrations.

In addition, a collaborative product called the Sepac folder includes one mint stamp from each participating postal administration. This folder has been produced since the first Sepac multination issue in 2007.

However, the folder does not include a complete set of Sepac stamps for that year.

While some countries issue only a single stamp featuring the Sepac theme, others issue more than one.

For example, Iceland, Guernsey, and Malta each issued a set of four stamps with the Sepac theme in 2016. However, only one stamp in each set includes the Sepac logo.

Even without all of the stamps with the Sepac theme, the folder is a fun and easy way to collect all participating postal administrations’ stamps in one place.

This year, all of the postal administrations except Vatican City participated in the Sepac series.

The design styles and formats of the Sepac stamps vary greatly.

Priced at approximately U.S. $17, the same folder will be offered for sale on the online philatelic shops of the Sepac postal administrations and at post offices in their jurisdictions.

For customers outside of the participating countries, one could shop around and find the most economical price with shipping fees.

Sepac organizes an annual competition to select the most beautiful stamp design in the series. The cooperation reaches out to subscribers of its philatelic newsletter and  to the general public. Philatelic prizes are offered as an incentive to vote.

I have participated by voting in the past, but have yet to win a prize.

I also have collected all seven of the presentation folders.

Several of the earlier folders included a promotional coupon from each participating postal administration for collectors to mail back and request more information. It only cost an international-rate stamp to mail back the coupon, and you received a complimentary philatelic collectible as gift.

These gifts included mint stamps, presentation folders, first-day covers, and maximum cards. A maximum card is a picture postcard, a cancel, and a stamp presenting maximum agreement with one another.

I enjoy the common-theme stamps from these beautiful places in Europe.