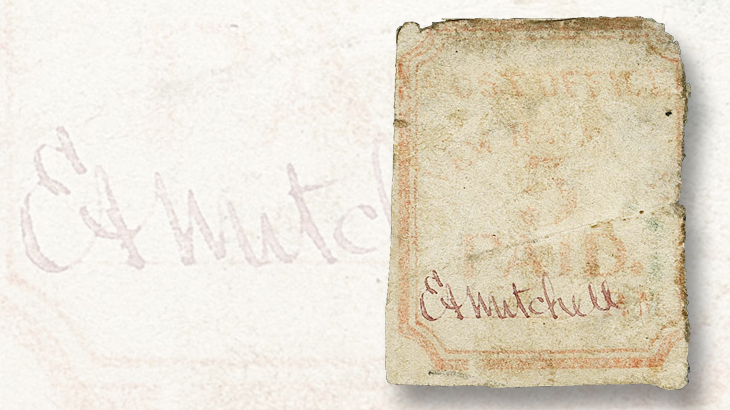 Also from the Siegel sale of the Alan collection, a 5¢ postmaster’s provisional (not a stamp but a handstamped envelope) from New Haven, Conn., sold for $9,775. It was the first example discovered of an eventual 11. 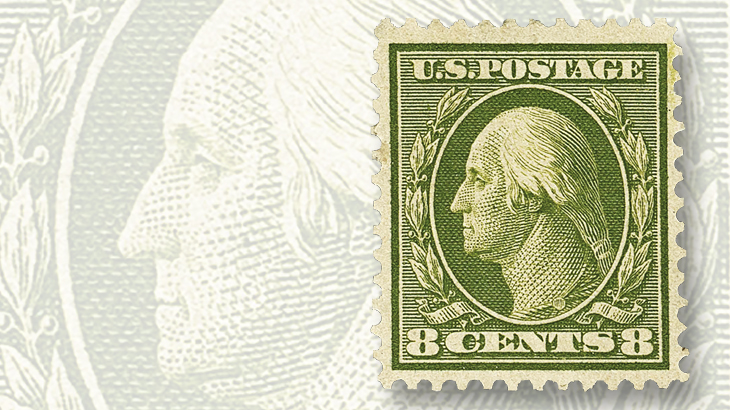 A scarce 8¢ Washington stamp on bluish paper from the Alan collection sale brought $16,675. 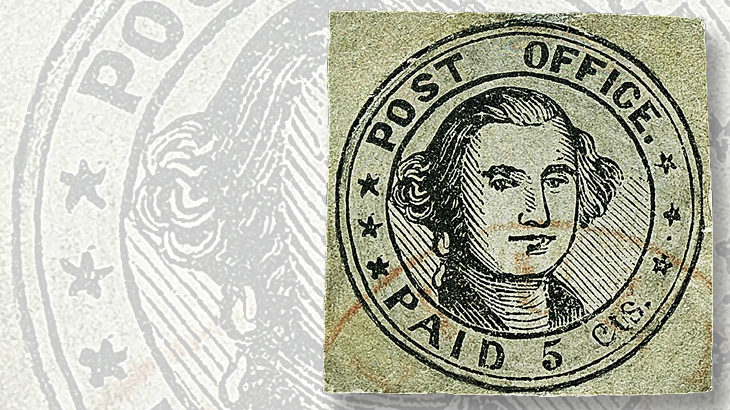 From the Alan collection sale at Robert A. Siegel Auction Galleries on Sept. 15, an example of the Millbury, Mass., 5¢ postmaster’s provisional, one of 19 known examples, brought $33,350. 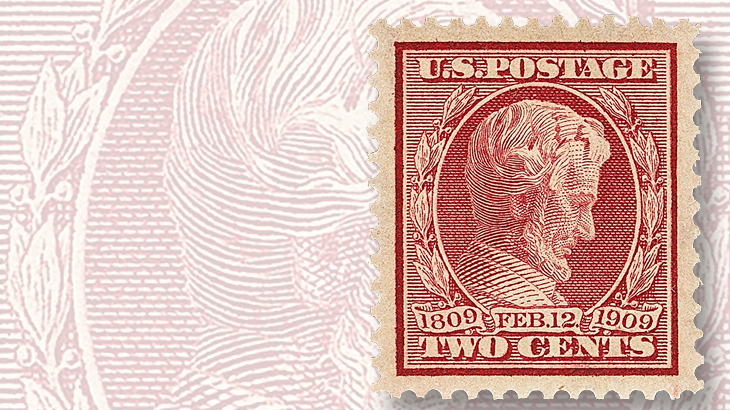 A mint never-hinged 2¢ Lincoln commemorative of 1909, graded gem 100, from the Alan collection offered by Siegel Auction Galleries on Sept. 15, realized $920. 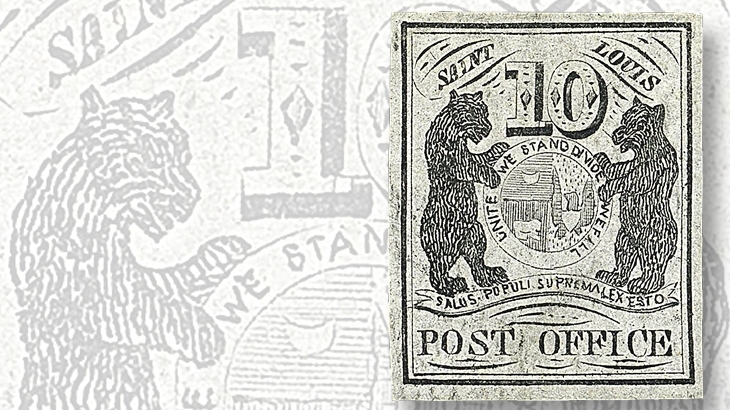 A faultless example of the 10¢ St. Louis postmaster’s provisional stamp on gray-lilac paper sold for $43,125 in the Sept. 15 Siegel sale of the Alan collection.
Previous
Next

Leading the charge in the Alan sale was a run of early postmaster’s provisional stamps, issued by local postmasters in cities and towns across America prior to the first national stamp issue of 1847.

A nice example of the Millbury, Mass., 5¢ provisional (Scott 7X1) was but one of the highlights of this section of the sale. Cut close to its circular shape, the stamp was later rebacked, with part of the frame and postmark carefully drawn in to make the stamp appear cut square.

Such shenanigans are considered a no-no for all but the very rarest of stamps. In the case of this iconic classic, the restoration work is acceptable, because only half a dozen of the 19 known examples are sound.

The stamp sold for $33,350, including the 15 percent buyer’s premium added by Siegel to all lots.

An even rarer, though less glamorous, provisional is the 5¢ from New Haven, Conn. These were not adhesive stamps but rather entire envelopes franked with a tombstone-style handstamp. Many of the surviving examples, however, are cutouts of just the handstamp.

The New Haven provisional exists in red or blue, on a variety of papers. Most of the varieties are unique, with 11 examples existing in total. Each one is countersigned by E.A. Mitchell, the postmaster.

Interestingly, according to a census of all the postmasters’ provisionals on the Siegel website, the original brass device used to strike the handstamps still exists, in the care of the Whitney Library at the New Haven Museum.

The example in the Siegel sale (Scott 8XU1) is faded and has heavy faults, but is notable for having been the first example discovered: in 1871, more than a quarter century after the stamps were made and used. It sold for $9,775.

An unused 10¢ St. Louis postmaster’s provisional on gray-lilac paper (Scott 11X5), “in the finest condition available,” boasted large, even margins and no faults at all. The lack of gum, while considered a fault on most unused stamps, is again excused on the earliest classics. This gem sold for $43,125.

Among later issues, a couple of unused examples of the 1869 2¢ Post Horse and Rider (Scott 113) stood as a lesson in the impact of grading.

The two stamps are essentially identical, except for one of them having noticeably more generous margins, lighter hinging and better overall freshness. That example, accompanied by a Professional Stamp Experts certificate assigning it a grade of extremely fine-superb 95, went for $4,025, handily exceeding its assigned value in the “U.S. Specialized by Grade” section of the Scott Specialized Catalogue of United States Stamps and Covers.

The other example, a mere “very fine,” went for $374, somewhat short of its catalog value in that standard grade.

The Alan sale was notable for its focus on highly graded stamps, and that trend continued into the 20th-century material. A mint never-hinged example of the 2¢ Lincoln commemorative of 1909 (Scott 367) was described as having “mathematically perfect” centering, graded gem 100.

Only five others have been given that perfect score; the Scott U.S. Specialized catalog does not assign value to any grade higher than a 98. For the 1909 2¢ Lincoln, what is normally a $10 stamp in a grade of very fine, rising to $360 for superb, realized $920 in the Siegel sale.