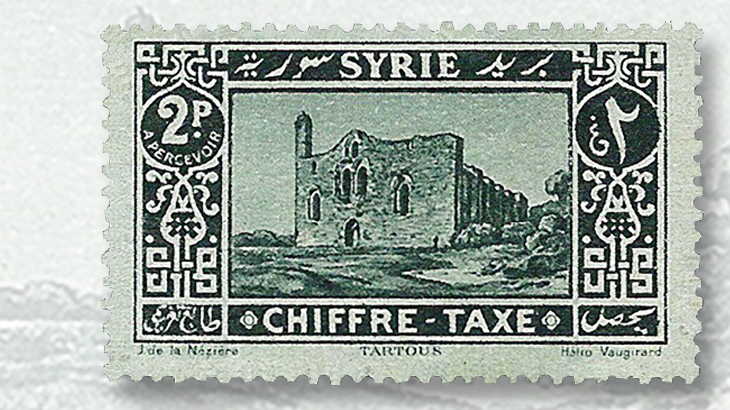 Syria’s 2-piaster postage due stamp shows the Cathedral of Our Lady of Tortosa in Tartus. It was used both as a church and as a fortress. 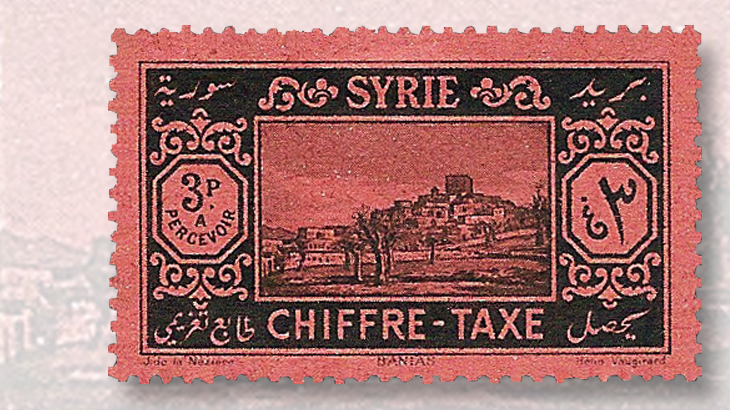 In the design of Syria’s 3-piaster postage due stamp featuring the town of Banias, a castle on a hill can be seen in the background. 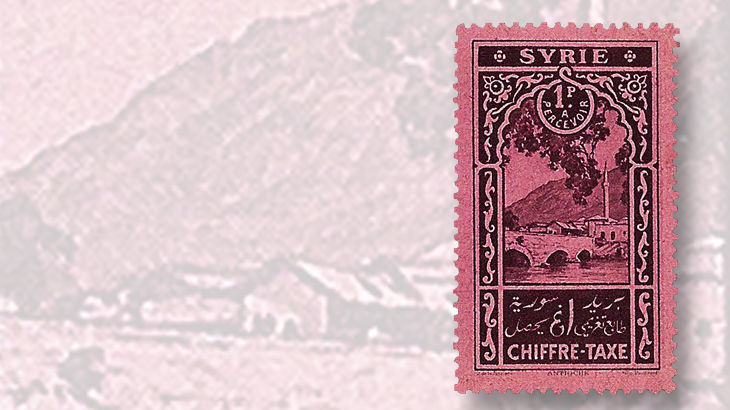 The only vertically formatted stamp in Syria’s 1925 and 1931 postage due set, the 1-piaster denomination depicts the ancient city of Antioch. 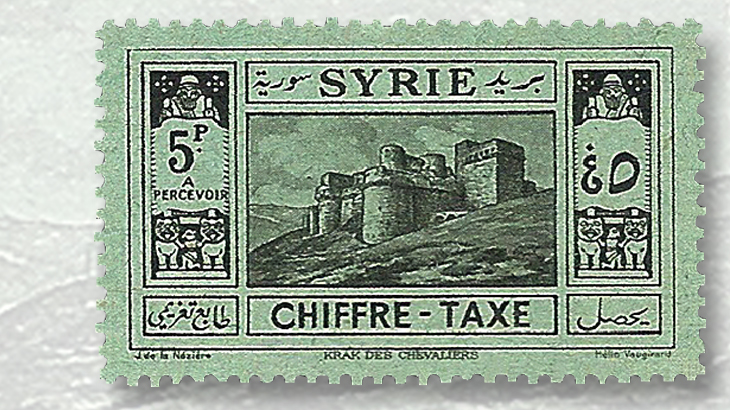 A crusader castle, the Krak des Chevaliers, is pictured on the 5-piaster postage due stamp. 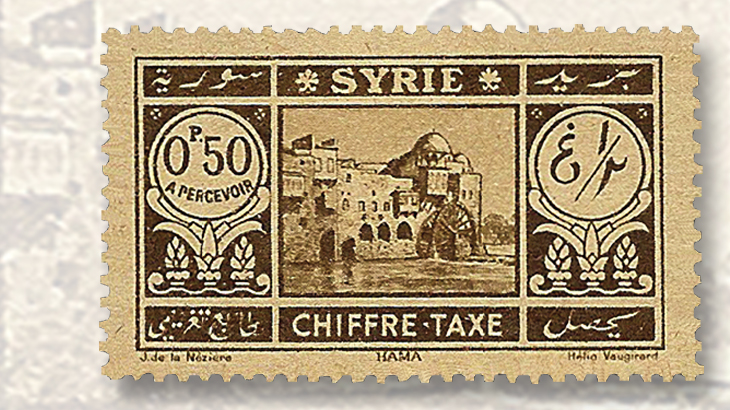 The ½-piaster low value of Syria’s postage due set of 1925 and 1931 features one of the giant Hama water wheels located on the Orontes River in the Syrian city of Hama. 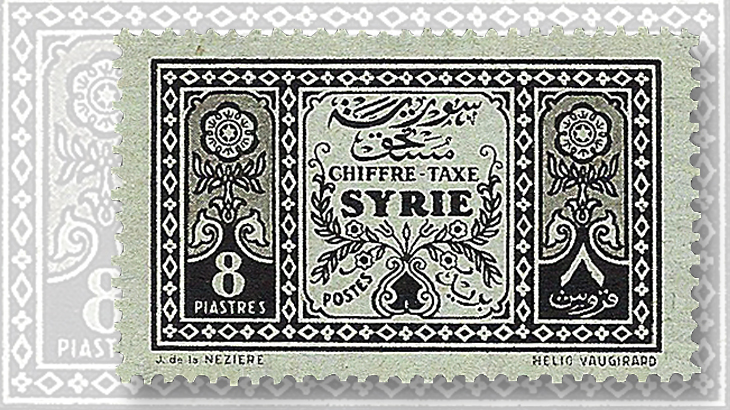 Syria issued this 8-piaster postage due stamp in 1931. Several floral images, including a vase of flowers, are pictured in the design. 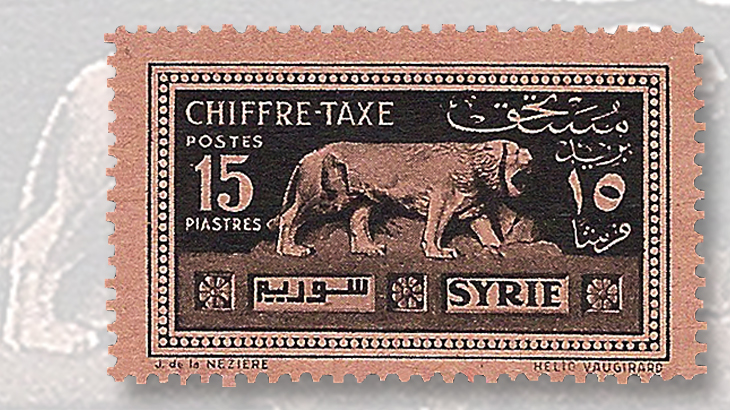 Illustrated on the 15-piaster high denomination of the Syrian postage due set is a stone sculpture of a Hittite lion.
Previous
Next

Six years later, in 1931, there apparently was still an adequate stock of these five denominations available at post offices around the country. However, there was a need for two higher denonimations, 8pi and 15pi. Postage due stamps with these denominations were issued in March 1931.

In this column, I will refer to all seven denominations as Syria’s first permanent postage due stamp set or simply the set.

The stamps of the set were printed on unwatermarked, colored paper and perforated gauge 13½. The perforated stamps are listed in the Scott 2016 Classic Specialized Catalogue of Stamps and Covers 1840-1940 as Syria Scott J33-J39.

In the grade of very fine, a set of these stamps is valued at $13.30 in both unused and used condition in the Scott Classic Specialized catalog. A mint, never hinged perforated set, however, should be worth at least four times as much.

If you want to add this set to your collection, I suggest you try to find it in mint, never hinged condition.

These postage due stamps can also be found used. If you are looking for a challenge, though, try to find them on commercial covers. Such covers are very difficult to find, but well worth the hunt.

I have seen single perforated stamps with trimmed perforations to make them appear imperforate. Collectors beware.

Seven different beautifully detailed designs were adopted for this set, one for each denomination.

The names of the sites are included in the table accompanying this article, as are the paper and design colors and the quantity produced of each of the seven perforated stamps.

The central design of the ½pi denomination depicts a Hama water wheel.

Up to 66 feet in diameter, these giant water wheels are situated along the Orontes River in the Syrian city of Hama. Their purpose was to move water from a lower to a higher elevation for irrigation through aqueducts.

Only 17 of these water wheels exist today. Although they are no longer in use, they are still in working condition.

The Hama water wheels were given names. The largest one, named Al-Mohammediyyah, supplied water to the Great Mosque of Hama.

The top central panel of the ½pi stamp contains the country name, “Syria,” in French. This is flanked by the Arabic word for “Posts” at right, and the country name in Arabic at left.

To the right of the central design is the denomination and currency in Arabic. At the left is the French equivalent for “½pi to be collected.”

The bottom panel contains the following: Arabic for “to be collected” in the right corner, the Arabic equivalent for “postage due stamp” in the left corner, and the French for “postage due” in the middle.

The 2pi, 3pi, and 5pi stamps have the same  French and Arabic inscriptions as the ½pi stamp.

A view of Antioch is featured in the central design of the 1pi denomination.

An ancient city located on the eastern part of the Orontes River close to Turkey, Antioch has been referred to as “the cradle of Christianity” because of its importance in the emergence of early Christianity. Also, according to Acts 11:26, the disciples were first called Christians at Antioch.

During Roman times, Antioch had a population of half a million people, but, during the Middle Ages its importance declined because of earthquakes, wars and the trade routes no longer going through the city.

The central design of the 2pi stamp shows the Cathedral of our Lady of Tortosa in the Syrian city of Tartus.

Tartus, a port city on the Mediterranean Sea, is considered to be one of the favorite vacation spots for Syrians.

The central design of the 3pi stamp portrays a scenic view of Banias, a beautiful town at the base of Mount Hermon to the north of the Golan Heights.

If you look closely at the design, you can see a castle on a hilltop. I believe the castle to be Qalaat al-Marqab (also known as Margat Castle), a massive crusader castle built in 1062.

In 1168, and for more than a hundred years during the Crusades, this castle was a garrison for the Order of Knights of the Hospital of Saint John of Jerusalem, the Catholic military order also  known as the Knights Hospitaller. At that time, Qalaat al-Marqab must have been a formidable fortress.

It is said that Saladin (1137-1193), the sultan who commanded Islamic forces during the military operations against the crusaders in the Levant, avoided attacking this castle.

In addition to having been used by Christian and Muslim soldiers as a defensive fort, it also was a safe haven and a prison at different moments in history.

Illustrated in the central design of the 5pi stamp is a view of the Krak des Chevaliers, a crusader castle sitting on top of a 2,130-foot high hill to the east of the city of Tartus, Syria.

At one time, it was large enough to house a garrison of some 2,000 men. The original structure at this site was built in 1030 and occupied by Kurdish troops.

In terms of its state of preservation, the Krak des Chevaliers is considered to be one of the most significant medieval castles in the world.

War and earthquakes throughout the centuries have destroyed or damaged this castle, but it always found an owner who rebuilt it. In 2006, UNESCO declared the Krak des Chevaliers a World Heritage Site.

As a result of the civil war that erupted in Syria in 2011, the castle has been damaged again.

The central design of the 8pi stamp features beautiful floral scrollwork and shows several flowers coming out of a vase.

Above the vase are the Arabic words “Syria” and “due” at the top and below them are the French words for “Syria” and “postage due.” On each side of the vase is the word “Posts,” in Arabic at right and in French at left.

Also shown on both sides of the vase is an image of a single flower appearing to come out of the ground. Below each flower are the denomination and currency, in Arabic at right and in French at left.

In total, the stamp depicts several different stylized kinds of flowers in bloom.

Pictured on the 15pi stamp is a side view of a stone sculpture of a Hittite lion.

At its peak, the Hittite Empire included a large part of Anatolia (in Turkey) in addition to segments of Upper Mesopotamia and northern Levant. The capital was Hattusa (in Turkey).

In the Hittite society, images of lions were important.

At Hittite sites in Turkey and Syria, free-standing lion sculptures have been discovered, and Hittite lions also are found protruding from stones and gateways.

It is not clear what the purpose of these massive stone lions was, but it is believed that some of them may have marked water sources.

These lions are considered to be impressive acts of Hittite engineering rather than great works of art.

These postage due stamps are well worth collecting. Not only are they beautiful and affordable, but they also depict a stunning and rich history.

Syria has some of the most phenomenal archeological finds in the world. Unfortunately, with the current war raging, these sights are no longer available for people to visit, and these stamps might be the last and only way we can enjoy these ancient places.