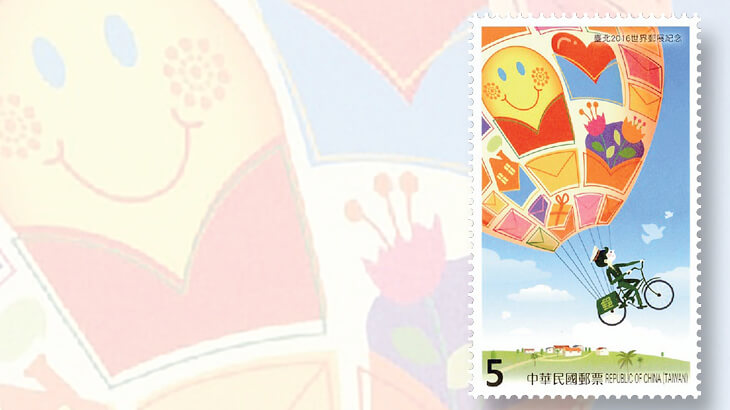 In the design of this NT$5 Taiwanese stamp celebrating the Oct. 21 opening of the Philataipei international stamp show and world stamp championship exhibition in Taiwan, a hot-air balloon is carrying a letter carrier and his bicycle. 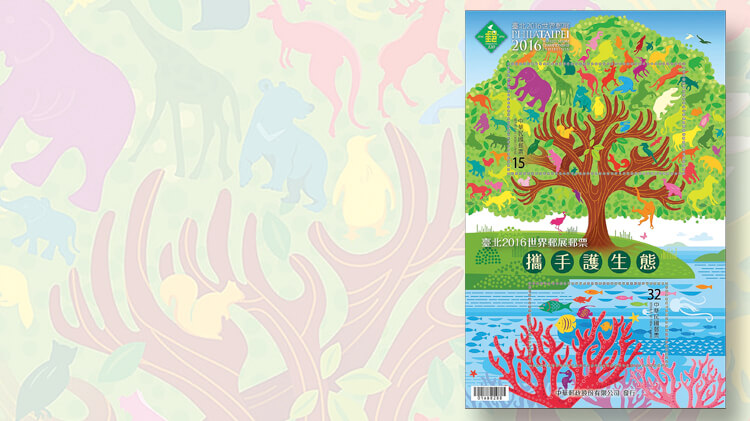 A Taiwanese souvenir sheet promoting Environment Day (Oct. 25) at Philataipei includes one stamp showing a tree with hands and colorful animals and a second stamp picturing fish and other creatures that live in the ocean. 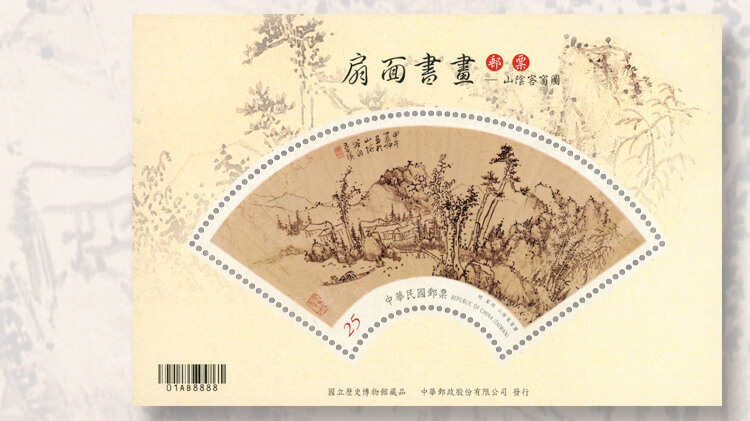 A fan painting is reproduced on a fan-shaped stamp in this souvenir sheet issued during the Philataipei show.
Previous
Next

According to Tony Lin of the stamp design section of Chunghwa Post’s department of philately, two sets were issued on the opening day, Oct. 21.

One set honors Oct. 21 as Post Day at the show. The two stamps in this set feature fanciful images of mail delivery. Like all of the new Philataipei issues, they were designed by Delta Design Corp.

The NT$5 stamp shows a letter carrier riding a bicycle attached to a hot-air balloon.  The balloon is decorated with images of envelopes, flowers, a house, and a large smiling face.

The NT$25 denomination shows a large carrier pigeon with an open parcel on its back. Stylized people, butterflies, birds, envelopes, flowers, musical notes, stars, a planet, and confetti are emerging from the parcel.

These two stamps were printed by the French security printer Cartor. They were produced in sheets of 18 and in a souvenir sheet containing the two different designs. However, the two stamps in the souvenir sheet are denominated NT$32, instead of NT$5 and NT$25.

In addition, the souvenir sheet is partly embossed and hot-stamped with holographic foil. This and other souvenir sheets issued at the show include the exhibition’s logo in the upper right.

The second Oct. 21 issue matches the theme for the last day of the show, Formosa Day. This se-tenant (side-by-side) pair of NT$13 and NT$32 stamps shows items related to the island’s natural environment and culture, including a dragon boat in Sun Moon Lake, Yushan (Taiwan’s tallest mountain), city buildings, and a butterfly.

In addition, a butterfly-shaped perforation separates the two stamps.

Southern Color Print of New Zealand printed these stamps in sheets of 18 and in a souvenir sheet of four (two se-tenant pairs). Unless otherwise mentioned, the Philataipei stamps were printed by offset.

The two Designers’ Day stamps, NT$9 and NT$25, show some of the skills needed by designers.

Chunghwa Post describes the figures on the NT$9 stamp as three designers demonstrating “their good command of reading, painting, taking photos or thinking.“

The single designer pictured on the NT$25 stamp has three heads and six arms.

Chunghwa Post said that the three heads represent the left brain, the right brain and “taking in outside information that is both broad and deep.”

The hand on each arm is holding a different instrument: a telescope, computer mouse, balance, pair of compasses, paintbrush, and book.

Printed by Southern Colour Print, the stamps were issued in separate sheets of 20 (two panes of 10), and a miniature sheet of six with the two stamps se-tenant.

The Environment Day souvenir sheet contains two stamps: a NT$15 denomination at the top featuring a large tree filled with colorful, symbolic animals, including purple, green, and blue elephants, a red kangaroo and a yellow penguin; and a NT$32 stamp at the bottom showing coral, fish, and other sea creatures. The branches of the tree resemble hands.

The NT$5 and NT$25 Comics and Animation Day stamps feature the cartoon character Little Yam (a Yam  shaped like the island of Taiwan) “delivering the mail of the future,” according to Chunghwa Post.

The stamps are in an horizontal triptych with a central label showing a carrier pigeon wearing a hat and kerchief and flying with a letter in its beak over the mountains of Taiwan.

Cardon Enterprise Co. Ltd. of Taiwan printed the stamps in sheets of 16 (four triptychs and two vertical pairs of stamps) and in a miniature sheet of six.

Numerous hearts are pictured on these two stamps. On the NT$17 denomination, the hearts form the image of a bird, which is holding a four-leaf clover in its beak. The NT$25 stamp depicts “many small hearts flowing together into one big heart,” according to the description from Chunghwa Post.

The final Philataipei issue on Oct. 24 is a souvenir sheet with a single NT$25 shaped like a fan and reproducing Traveler at Shanyin County by Lan Ying (circa 1585-1664). The original fan painting is housed at Taiwan’s National Museum of History.

Chunghwa Post also is offering a pane with two of the souvenir sheets. The sheet was printed by Cartor.