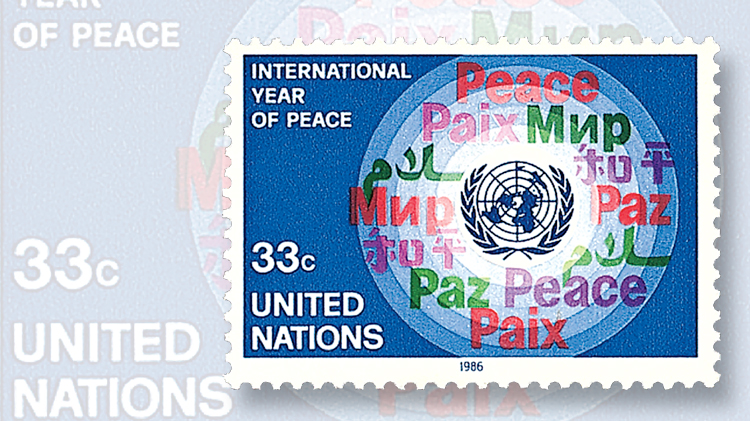 Several stamps issued by the United Nations Postal Administration feature a theme of peace, such as this 1986 33¢ International Year of Peace stamp. In 2017, the UNPA will release six stamps and a souvenir card for the International Day of Peace, Sept. 21

The United Nations Postal Administration announced its 2017 stamp program in its publication for collectors, Fascination Philatelic Bulletin (No. 120).

The program is scheduled to begin Jan. 13 with a Year of the Rooster pane of 10 $1.15 stamps and se-tenant labels. This will be the seventh pane in UNPA’s China Lunar Calendar series.

The $1.15 stamps are for use from the UNPA’s post office at U.N. headquarters in New York City. The UNPA also has post offices at the Palais des Nations in Geneva, Switzerland; and the Vienna International Center in Vienna, Austria.

The UNPA also will issue new stamps in its Flag, Endangered Species, and World Heritage series in 2017.

Eight stamps in the Flag series are slated to be issued Feb. 3. This series featuring flags of U.N. member states began Sept. 26, 1980, and is updated as new nations join or make significant changes in the designs of their flags. The new stamps will be denominated $1.15 for use from U.N. headquarters in New York City.

For World Wildlife Day, March 3, the UNPA will issue 12 stamps bringing attention to endangered species. The issue will include three panes of 16, each with four different se-tenant stamps, for use from the three UNPA post offices.

The World Heritage stamps will feature sites in Canada and will be issued July 1 in conjunction with that country’s 150th anniversary. The set will include six stamps (three for each UNPA post office) and three prestige booklets with text and illustrations in addition to stamps.

National costumes and dances will be featured on stamps to be issued April 13, in what the UNPA describes as six mini-sheets of six stamps each.

The UNPA reports that this program is tentative and subject to change.