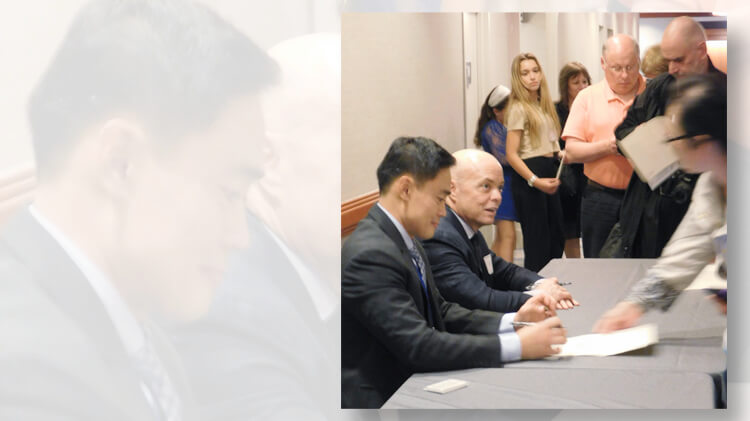 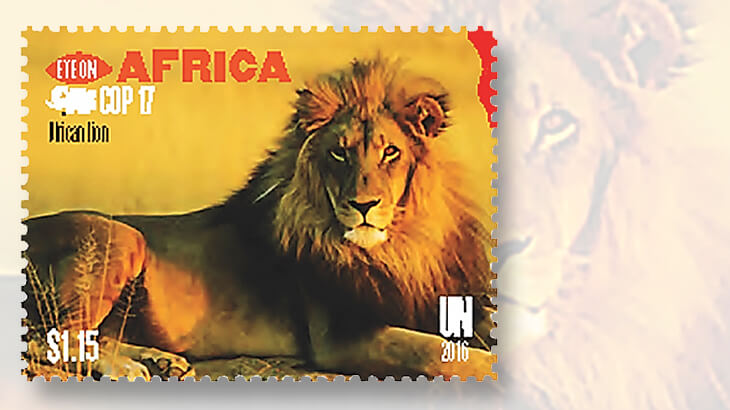 One of the United Nations’ World Wildlife Conference stamps issued Sept. 23 that were honored at a ceremony held at the ASDA show. 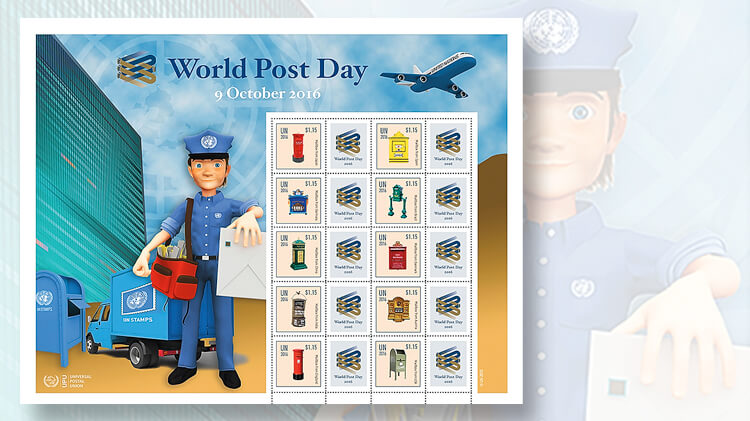 The United Nations Postal Administration office in New York issued this personalizable pane of 10 stamps with labels Oct. 6 in New York City, in celebration of the upcoming World Post Day.
Previous
Next

The event was held on the first day of the ASDA New York Fall Postage Stamp Show at the New York Hilton Midtown in Manhattan.

The stamps for the World Wildlife Conference were issued in part to commemorate the opening day of a world wildlife conference in Johannesburg, South Africa.

Three of the stamps in each souvenir sheet depict animals, and the fourth stamp shows a plant. The stamps are denominated $1.15 for the New York issue, 2 francs for the Geneva office stamps, and €1.70 for the Vienna stamps.

Full details of the World Wildlife Conference stamps were reported by Denise McCarty on page 14 of the Oct. 24 Linn’s Stamp News.

World Post Day is celebrated each year on Oct. 9, the anniversary of the establishment of the Universal Postal Union in 1874.

The UPU, a United Nations specialized agency, describes itself as the postal sector’s primary forum for global cooperation, and the primary forum for cooperation between governments, postal services, regulators and many other postal-sector stakeholders. It is composed of 192 member countries.

“The purpose of World Post Day is to bring awareness to the post’s role in the everyday lives of people and businesses, as well as its contribution to global social and economic development,” according to the UNPA.

The serious work of the UPU is celebrated with whimsical designs on the pane of 10 stamps with adjoining labels issued during the Oct. 6 ceremony.

The stamps are offered for mail use at the UNPA post office at U.N. headquarters in New York City, and can be personalized through the U.N./New York office with photographs printed on the adjoining label.

The stamps are denominated $1.15, the international first-class letter rate for mail weighing 1 ounce or less.

The stamps each show different mailboxes from around the world. The 10 countries represented by the designs are Japan, Spain, Germany, Brazil, China, Denmark, India, Austria, England, and the United States.

Each mailbox is pictured against a plain background, with “UN 2016” printed in the upper left corner, and the $1.15 denomination at upper right.

If not personalized, the adjoining labels show the emblem of World Post Day against a blue background, with “World Post Day 2016” printed beneath it.

Various elements representing mail delivery are depicted in the decorative selvage on the pane, including a United Nations mailbox and a “UN Stamps” delivery truck outside U.N./New York headquarters. A cartoon uniformed mailman carrying a satchel full of mail stands in the foreground as a jet flies overhead.

The United Nations emblem of a world map framed by two olive branches can be seen in the background. Printed across the top is the phrase “World Post Day,” along with the World Post Day emblem and the date “9 October 2016.”

The stamps were printed by the United Nations using 600 DPI digital print.

The stamp pane was designed by the UNPA graphic design team, represented at the New York ceremony by art director Sergio Baradat.

UNPA Chief Thanawat Amnajanan was master of ceremonies for the event.

Amnajanan and Baradat greeted attendees after the ceremony concluded and signed the ceremony folders, which were each franked with one of the World Post Day stamps.