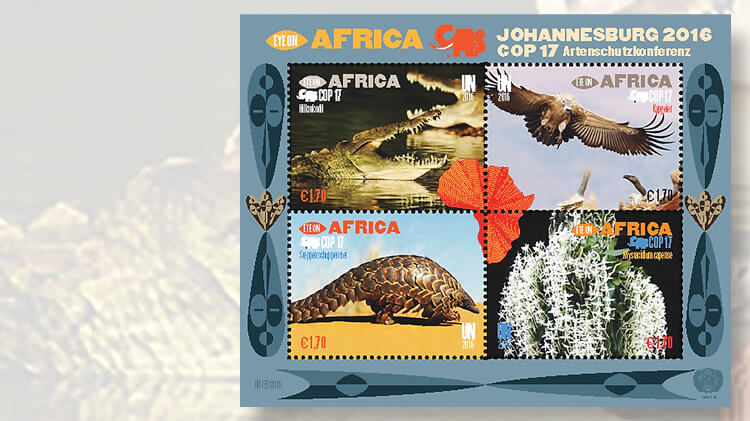 The four stamps in the Eye on Africa souvenir sheet for use from the United Nations post office at the Vienna International Center in Vienna, Austria, show the Nile crocodile, Cape vulture, Cape pangolin, and a miniature orchid. 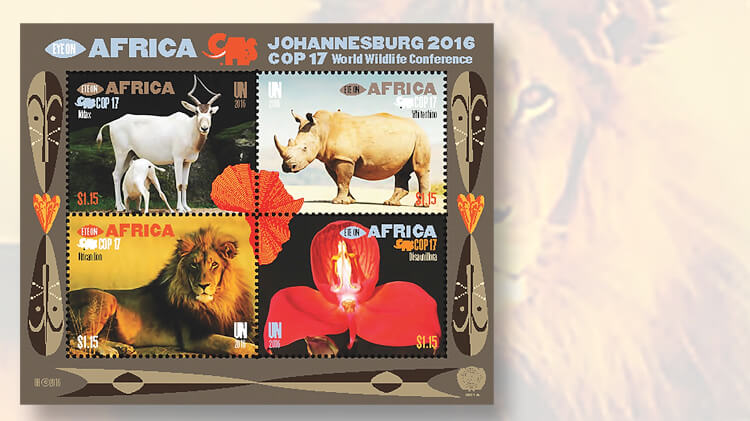 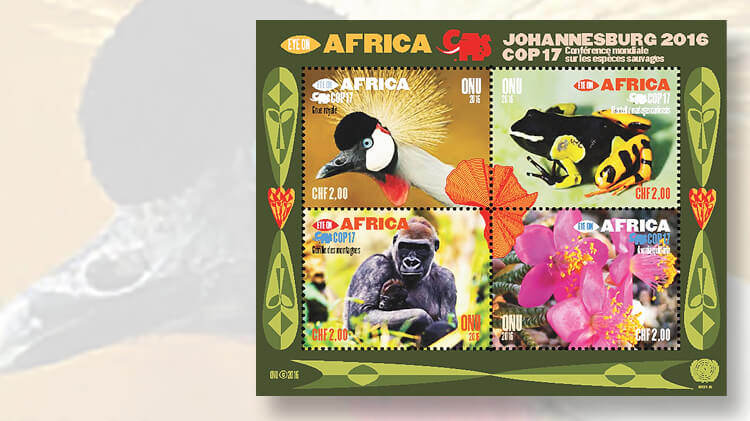 The United Nations Postal Administration souvenir sheets are called Eye on Africa. The souvenir sheet for the post office at the Palais des Nations in Geneva, Switzerland, pictures the gray crowned crane, Madagascan mantilla, mountain gorilla, and a flowering succulent.
Previous
Next

Called Eye on Africa, this stamp set features endangered animals and plants from that continent and commemorates the 17th meeting of the Convention on International Trade in Endangered Species of Wild Fauna and Flora, or CITES CoP17, held Sept. 24-Oct. 5.

The convention is an international agreement between 182 parties (181 countries and the European Union) with the aim of ensuring that international trade in specimens of wild animals and plants does not threaten their survival, according to UNPA.

Three of the stamps in each souvenir sheet depict animals, and the fourth stamp shows a plant.

The animals featured on the $1.15 U.N./New York stamps are an addax, white rhinoceros, and African lion.

The plant is Disa uniflora, an orchid that is only endemic to South Africa and is the floral symbol of the Western Cape province. The flowers are usually red or pink, but occasionally are yellow.

The addax (Addax nasomaculatus), also known as the screw-horned antelope, is critically endangered in its natural habitat of the Sahara.

The Sahara Conservation Fund reports that probably fewer than 300 remain the wild. Other sources mention that perhaps only three remain.

However, the addax is doing well in captivity, with as many as 1,000 in zoos, ranches, and other private collections around the world.

Weighing up to 6,000 pounds and growing up to 15 feet long and 6 feet tall, the white rhinoceros (Ceratotherium simum) is the second largest land mammal; only the African elephant is larger.

The International Rhino Foundation reports that it is the least endangered rhinoceros species with “a population ranging from 19,682 to 21,077 individuals in the wild.”

Despite the nickname “king of the jungle,” the African lion (Panthera leo) prefers to live and hunt on grassy savannahs. They are the only cats that live in social groups. Called a pride, the group includes several related female lions and their cubs, as well as a couple of male lions.

A nonmigratory bird, the gray crowned crane (Balearica regulorum) inhabits wetlands, marshes, and open grasslands of eastern and southern Africa. A subspecies, Regulorum gibbericeps, is the national bird of Uganda, appearing on its coat of arms and flag.

The Madagascan mantella (Mantella madagascariensis) is one of the more than 300 species of frogs found on the island of Madagascar, where it lives along streams in and near forests.

The mountain gorilla (Gorilla beringei) is the largest living primate; males, called silverbacks, can grow up to 6 feet tall and weigh as much as 400 pounds, according to the Rain Forest Alliance.

As for their habitat, the alliance said, “Mountain gorillas live primarily on the lush mountain sides of central Africa where, for many years, extensive human violence has destroyed the local environment, and consequently negatively impacted the lives of these primates. Today, mountain gorillas mostly live in national parks in Rwanda, Uganda and the Democratic Republic of Congo.”

The Nile crocodile (Crocodylus niloticus) is widely distributed throughout Africa, living in rivers, lakes, and swamps. Four of these crocodiles also have been discovered in the Everglades in Florida, although there is no evidence they are reproducing there, according to reports in National Geographic and other publications.

The Cape vulture (Gyps coprotheres), also called the Cape griffin, is found mainly in South Africa, Botswana, and Lesotho. However, this scavenger sometimes ventures into neighboring countries. It was classified as endangered in 2015.

Pangolins, scaled-covered mammals that can curl up into a ball, are often called “scaly anteaters” because of their appearance and their diet of ants and termites.

The Cape pangolin (Smutsia temminckii) is one of the four species of pangolin in Africa; there are another four in Asia.

The Save Pangolins nonprofit organization reports, “Poaching for the illegal wildlife trade and habitat loss have made these extraordinary creatures one of the most endangered mammal groups in the world.”

The UNPA has a long history of featuring endangered fauna and flora on its postage stamps, including its Endangered Species series that began March 3, 1993.