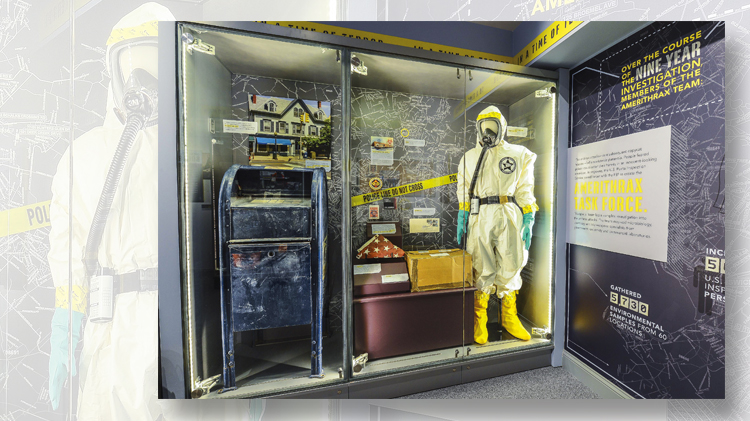 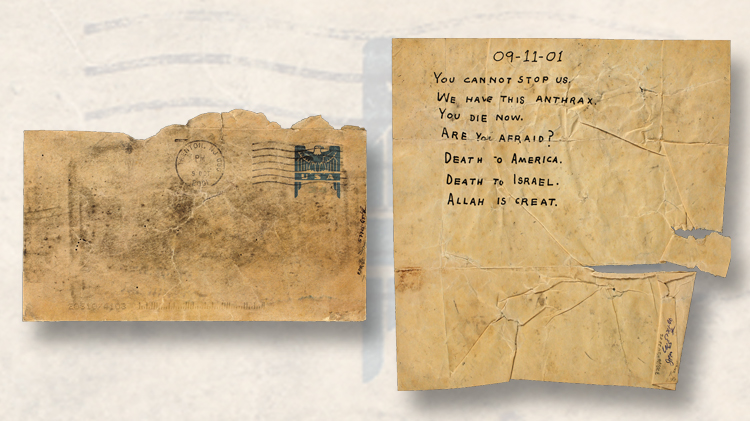 This letter containing the anthrax virus was mailed to the office of Senator Tom Daschle in 2001. According to the National Postal Museum, “The examination and decontamination processes left the letter and envelope nearly illegible.” (Federal Bureau of Investigation/Courtesy Smithsonian National Postal Museum.)
Previous
Next

I recently had the opportunity to visit the Smithsonian’s National Postal Museum as a tourist. In the past, most of my visits to the museum have been as a Linn’s editor, each of which offered a behind-the-scenes look at what goes on at the museum.

I must say that seeing the museum from a tourist’s point of view was an eye-opening experience.

My family and I had only an afternoon to tour the Smithsonian’s museums in Washington, D.C., so we picked two. The first was the National Building Museum, where the highlights were an exhibit on icebergs and another on dollhouses. Both were enjoyable and informative.

We then hopped on the Washington Metro Red Line, and within two quick stops, we were at Union Station. The entrance to the National Postal Museum is on Massachusetts Avenue, across the street from Union Station.

The museum is located inside the Postal Square Building, which once served as the city post office. The building still has an operating post office.

After going through security, we entered the 12,000-square-foot William H. Gross Stamp Gallery. Upon entering the gallery, I immediately felt a sense of pride of how our hobby is represented by this magnificent display of rare stamps, including the United States 1918 24¢ Inverted Jenny airmail stamp and the 1856 British Guiana 1¢ Magenta. The British Guiana stamp is on loan from owner Stuart Weitzman until November 2017.

My husband was excited to see the extensive display of Elvis Presley stamps.

One of the most interesting exhibits currently on view at the museum is “Behind the Badge: The U.S. Postal Inspection Service,” which includes the anthrax letters sent to Senators Patrick Leahy and Tom Daschle, and NBC Nightly News anchor Tom Brokaw Sept. 18, 2001.

The nation was reeling from the attacks of 9-11 when the U.S. Mail was used by terrorists to send letters containing the deadly brown anthrax granules.

Collectors might be surprised to learn that the original anthrax letters were not destroyed. The letters went through a thorough decontamination process. Several of the letters are on loan from the Federal Bureau of Investigation to the National Postal Museum.

The letters and other fragile rarities are in special display cases that light up when activated by visitors to the museum. The light stays illuminated for what seem to be seconds, but long enough to view the exhibits. Limited exposure to light protects these exhibits and others at the museum.

The display also includes the mail collection box in which the terrorist placed the letters. The display can be seen in the photo shown nearby.

Look closely, and you will see the American flag that hung in the mail processing and distribution center where postal workers Joseph Curseen Jr. and Thomas Morris Jr. were fatally infected.

The stories behind the anthrax cases and other postal inspectors’ investigations can be found on the museum’s website.

Other exhibits outside the Gross gallery include railroad cars, a stagecoach, mailplanes, other postal vehicles, the musuem’s gift shop, and the post office.

If you are visiting the nation’s capital, place the museum at the top of your list of sites to tour. You won’t be disappointed.