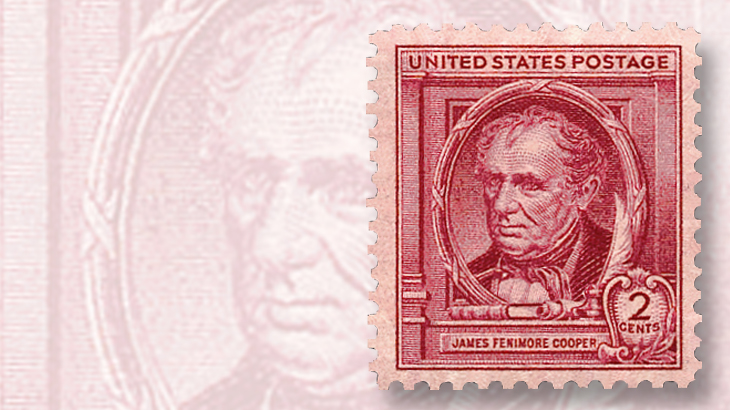 The 2¢ stamp honoring author James Fenimore Cooper was issued in 1940 as part of the Famous Americans series.

James Fenimore Cooper, the American author of The Last of the Mohicans, The Deerslayer and some 30 other novels, was born Sept. 15, 1789, in Burlington, N.J.

After a brief college career and service in the U.S. Navy, Cooper gained an inheritance at age 20 and married in 1811. His first book, Precaution, was published in 1820 and was greeted with some success.

Later works would include his Leatherstocking tales, including The Last of the Mohicans (1826), which is generally recognized as his most famous novel. The five novels of the adventure series center on the main character, Natty Bumppo, a frontier scout also known as Leatherstocking and Hawkeye. The novels take place during different periods of Bumppo’s life, ranging from his youth in The Deerslayer to old age and death in The Prairie.

Cooper died the day before his 63rd birthday, in 1851. He is honored on a 2¢ rose carmine stamp in the American Authors set of the 1940 Famous Americans series (Scott 860).