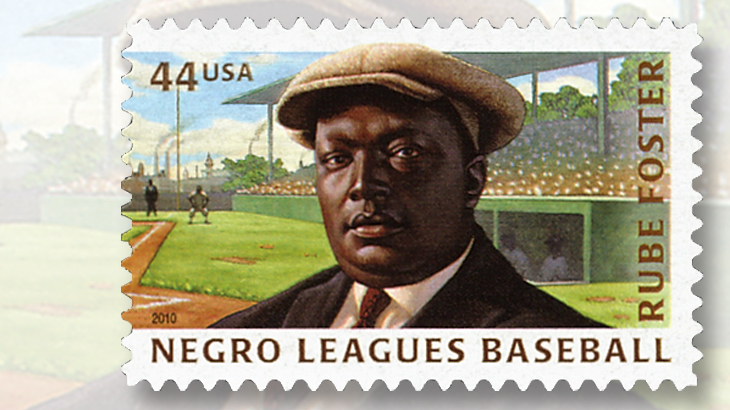 A pair of 44¢ stamps issued se-tenant in 2010 honors the history of Negro Leagues baseball. The stamp at left shows an action scene of a player being called safe after sliding into home plate. The stamp at right continues the scene, but specifically pays tribute to Andrew “Rube” Foster (Scott 4466).

Andrew Bishop Foster was born Sept. 17, 1879, in Calvert, Texas, and had a successful career as a pitcher with a number of professional teams before joining the Chicago Leland Giants (later the Chicago American Giants) as player-manager in 1907. He became the team’s owner, and after retiring from play in 1917, he led the formation of the Negro National Leagues in 1920.

Foster continued to manage the Giants in the successful new league, winning the league championship during the first three seasons.

After suffering a mental breakdown and retiring from the sport, Foster died in 1930. He was elected to the National Baseball Hall of Fame in 1981, and his plaque there describes him as a top pitcher in black baseball for nearly a decade, and the foremost manager and executive in the history of the Negro Leagues.