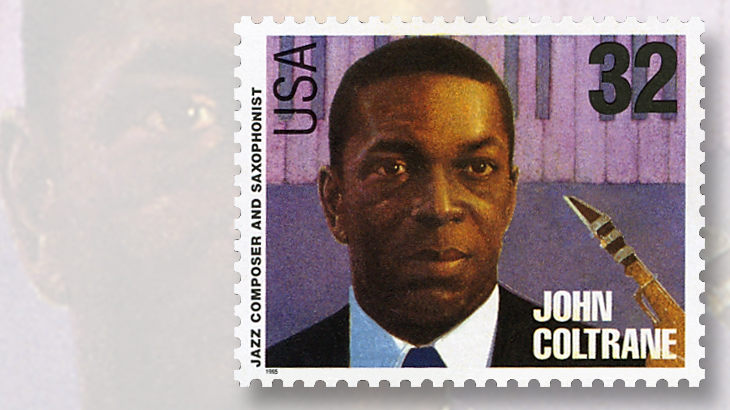 Influential jazz legend John Coltrane was honored on a 32¢ stamp issued in 1995.

A native of Hamlet, N.C., Coltrane began playing alto saxophone in high school before joining the U.S. Navy near the end of World War II. Stationed in Hawaii, he performed with a swing band on base and with them made his earliest recordings.

After his service, Coltrane played tenor sax with bandleader and saxophonist Eddie “Cleanhead” Vinson before joining the Dizzy Gillespie band and then hooking up with trumpeter Miles Davis in the 1950s. Coltrane and Davis recorded off and on for several years, creating classic sides with the Davis band.

Coltrane also formed a group of his own, and the subsequent recording sessions from 1957 onward resulted in a string of acclaimed albums, including Blue Train (1957), Giant Steps (1960), and A Love Supreme (1965), often cited as Coltrane’s masterpiece.

His evolving improvisational style in the 1960s unfortunately coincided with serious health setbacks, leading to his death from liver cancer at age 40 in 1966.

Coltrane’s many musical honors include being named Jazzman of the Year by DownBeat magazine in 1965, and a Grammy Lifetime Achievement Award in 1997.