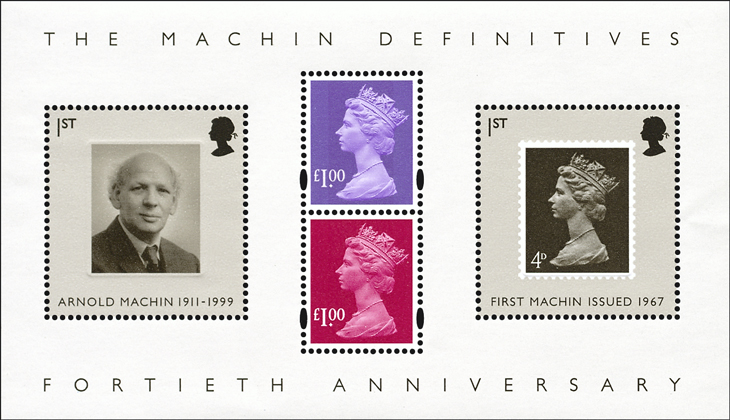 Sculptor Arnold Machin is pictured on the first-class stamp at left, issued by Great Britain's Royal Mail in 2007.

His name has been permanently linked with the Machin series of definitive stamps issued continuously by Great Britain’s Royal Mail since June 1967. The familiar stamps show a sculpted left-facing profile portrait of Queen Elizabeth II that was completed as a bas-relief in plaster by Machin.

Most of the Machin definitives have been issued in a single color, with a very broad range of colors employed over the course of almost 50 years. The stamps have also been printed using a variety of processes, though most are printed by either gravure or offset lithography.

As a young teenager, Machin was an apprentice with a pottery firm before attending art school at Stoke-on-Trent. He became a member of the Royal Academy of Arts in 1947 after serving in prison during World War II as a conscientious objector. He later taught at the Royal College of Art. Machin died in 1999.

The Machin design has appeared on numerous other postage adhesives, including a series of post & go vended stamps issued in 2011 to mark Machin’s birth centenary.