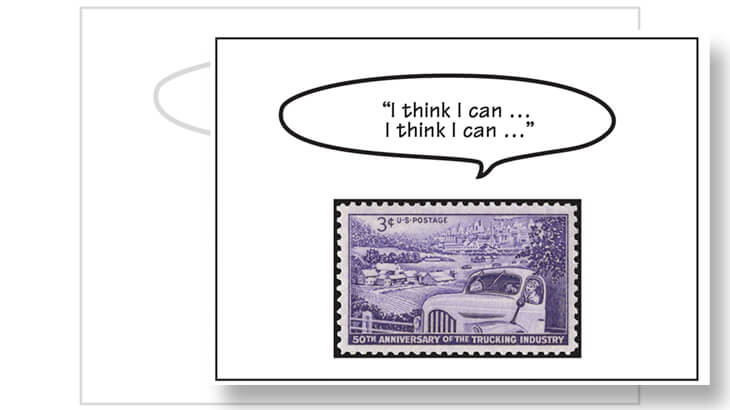 The August cartoon caption contest featured the 1953 3¢ Trucking Industry commemorative with the truck seeming to labor up hill. Terry Miller of Newnan, Ga., channels The Little Engine That Could with the winning line in the nonphilatelic part of the cart

Surprisingly, the growing size of the Scott Standard Postage Stamp Catalogue received quite a lot of attention from Linn’s readers who entered the August cartoon caption contest. The stamp for this contest was the 1953 3¢ Trucking Industry commemorative.

James Reeves of Huntingdon, Pa., caught the essence of this theme with “Here’s your delivery of the new 2053 Scott Catalogue … in 750 volumes weighing 20,000 pounds!”

Several partisan or otherwise unprintable entries were received treating aspects of the current U.S. presidential election. One viewpoint that sums up the situation, as seen by some Linn’s readers, came from Bert Krawchuk, a northern neighbor from Winnipeg, Manitoba, Canada: “No matter who I vote for, it may be time to check out Canada!”

The bouncing gasoline prices of the last six months also drew comment, but the difference between 1953 and 2016 was the most-used theme: “That sign back there said gas was 29¢ a gallon — will the rises never stop?” from Mike Atsalinos of Silver Spring, Md.

The illustration on the stamp is clearly that of a truck laboring up hill, and the nonphilatelic winner, Terry Miller of Newnan, Ga., channeled The Little Engine That Could with his entry pictured above.

On the philatelic side, Mick Zais of Columbia, S.C., takes the prize with, “No one will ever know this load of airmail travelled by truck!”

“I’m hauling a couple tons of excess 3¢ commemoratives. Where should I dump ‘em?” by Fred White of Rancho Cordova, Calif.

“With gas under $2 a gallon, I’ll have enough money from this trip to join the APS!” by Wayne DeWald of Arlington, Texas.

“That’s the third skunk I’ve run over today, but I can’t roll up this window … ” from David Saks, sent by email.

“Hmmm … If I could find another collector to ride shotgun, I’d be able to keep awake just talking stamps!” by Tom DeBoever of Grosse Pointe Woods, Mich.

The next cartoon caption contest will be announced in the Oct. 10 Linn’s.