Number of changes and enhancements in 2017 Scott U.S. Specialized catalog is mind-boggling 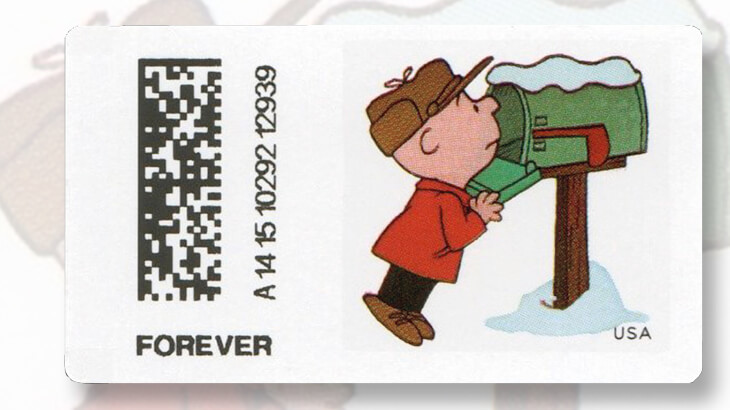 The Charlie Brown Looking in Mailbox computer-vended postage stamp has been assigned Scott CVP98 in the 2017 Scott Specialized Catalogue of United States Stamps and Covers. The Scott number originally was assigned as CVP93 in Vol. 1 of the 2017 Scott Stan

Collectors of computer-vended postage stamps will find many changes in the back-of-the-book section of the 2017 Scott Specialized Catalogue of United States Stamps and Covers. The new specialized catalog will be published in October.

Editorial enhancements have been made, and new major numbers have been added in the Computer Vended Postage section. Computer vended postage stamps are stamps printed from self-service kiosks known as Automated Postal Centers, or APCs. The kiosks are found in select post offices and give postal customers 24-hour access to the most frequently needed postal products, including stamps.

The stamps begin as blank labels or labels with designs, which have included Rudolph the Red-Nosed Reindeer, Spiderman, the United States flag, and Charlie Brown and a mailbox.

Postal customers can purchase computer-vended stamps at the self-service kiosks without waiting in line at the postal counter.

Among the new listings in the 2017 Scott U.S. Specialized catalog is the 2012 black and pink self-adhesive stamp die cut with rounded corners, the newly assigned No. CVP85B. No. CVP85 has the vertical coding right of the date; CVP85B has the coding left of the date. The Scott U.S. Specialized catalog states that Scott CVP85-CVP85B were “available during a nationwide test of machines and could be printed in any denomination from 1c to $99.99. Only one to six examples of No. CVP85 could be purchased and printed at one time.”

Also added to the Computer Vended Postage section are Scott CVP87A and CVP87B. A similar note that follows Scott CVP87 states, “No. CVP87 was available during a nationwide test of machines and could be printed in any denomination from 1c to $99.99. Stamps can be inscribed with a variety of different service inscriptions.” This stamp is die cut with perpendicular corners and has vertical coding to the right of the date. The newly assigned CVP87A is die cut with perpendicular corners. The vertical coding is to the left of the date.

Also assigned this year is No. CVP87B, which has the APC vertical coding to the right of the date and also a clear phosphor stripe along the left margin. This phosphor stripe is in response to a requirement of the U.S. Postal Service to use “signalling label stock.” The editor’s note that accompanies this listing states, “Labels with pink stripes along the right margin continued to be used until stocks were exhausted or labels with pre-printed vignettes were issued for use in some machines on Apr. 1, 2014 (CVP90-CVP91).”

We suggest that catalog users read the introduction and editor’s notes in this section and every section of the catalog to have a clear understanding of what the listings mean.