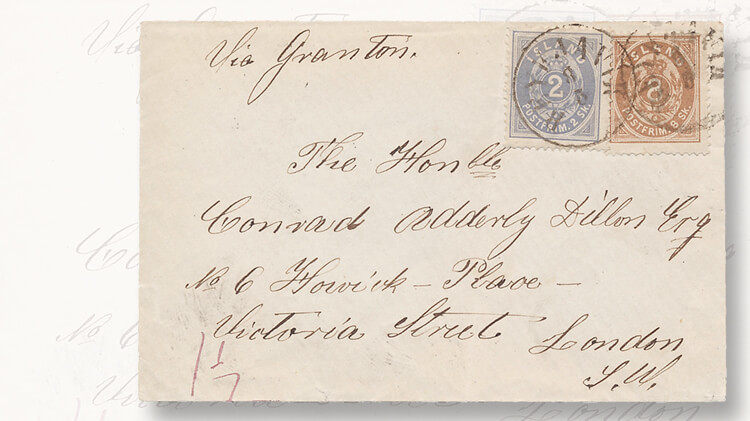 A rare intact cover from Iceland mailed to London in 1875 will be offered during the Sept. 30-Oct. 1 Postiljonen auction in Malmo. The cover is franked with two of Iceland’s earliest issues. 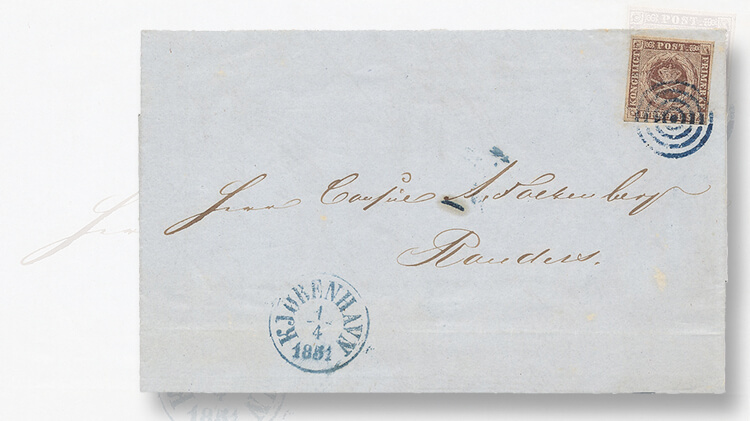 The Postiljonen auction firm in Malmo, Sweden, will offer stamps and postal history from Scandinavia and around the world on Sept. 30 and Oct. 1. This Danish cover was mailed in Copenhagen April 1, 1851, the first day of issue for the country’s first stam
Previous
Next

On Sept. 30 and Oct. 1, the Postiljonen auction firm will conduct a series of public auctions offering Scandinavian and worldwide material. The sales are taking place at the firm’s offices in Malmo, Sweden, a short train ride from Copenhagen, Denmark.

The auction begins Friday afternoon with worldwide stamps and postal history from non-Scandinavian countries (presented alphabetically). The countries represented include Brazil, with examples of all three denominations of the famed Bull’s-Eyes, the nation’s first stamp issue; China, with postal history plus items from the People’s Republic; German states and Germany; Great Britain and British colonies; Italian states and much more.

Listed among the German material are Danish stamps on and off cover struck with cancels from towns that are now part of Germany, including Horst, a village that today is in the German state of Mecklenburg-Vorpommern, but which in 1851 was part of the southern reaches of the Danish kingdom. The 4-rigsbank skilling stamp (Denmark’s first stamp, Scott 2) on piece has a “perfect strike” of the scarce 142 numeral postmark identifying Horst. The stamp is listed by Postiljonen with a starting price of E400 (approximately $450) against a value of $750 in the 2016 Scott Classic Specialized Catalogue of Stamps and Covers 1840-1940.

There are also a few nice classic United States lots, including a top plate block of 12 of the country’s first airmail stamp, the 1918 24¢ carmine and blue Jenny airplane stamp (Scott C3) with two “TOP” inscriptions and arrow. The plate block is listed with a starting price of E250 (about $280).

The Weigel collection of Denmark features quality classic material from 1851-64, including a first-day cover of the country’s 4rbs first stamp postmarked in Copenhagen on April 1, 1851.

The folded lettersheet has full and dated contents, according to Postiljonen, and is certified by Moeller. The stamp is tied to the cover by the mute cancel of concentric rings stamped in blue that was used in Copenhagen only from April 1-6, 1851, “in accordance with instructions in force on the day of issue (these instructions were later changed.)”

Formerly in the collections of Christian Andersen and Knud Mohr, the cover is listed with a E15,000 starting price (about $16,740).

The first part of the Indridi Palsson collection of Iceland was offered by Postiljonen in March of this year, and all but one of the 207 lots were sold in the sale (and the one remaining item sold soon after).

Part 2, in the upcoming auction, offers some 283 lots of stamps, proofs and postal history, including early stampless covers. A featured lot is described as “the only recorded complete cover to a foreign destination (outside of Denmark).”

Mailed in Reykjavik May 8, 1875, and known as the Granton cover for its handwritten direction “Via Granton” at upper left, it is addressed to London, England, and franked with the 1873 2-skilling and 8sk stamp (Scott 1 and 3, respectively).

These stamps individually are listed in the Scott Classic Specialized catalog at $50,000 for the 2sk stamp on cover, and $44,000 for the 8sk on cover.

On the reverse of the cover are a May 13 transit postmark from Lerwick, and a May 20 London arrival postmark.

The Granton cover is accompanied by a Moeller certificate, and is listed by Postiljonen with a E50,000 starting price (about $55,800).

Additional treasures are found in the first in a series of sales by Postiljonen that will feature items from the Gummesson collection of Finland.

“The collection which starts with pre-philately encompasses all the classic issues and up to 1917, including the early postal stationery period, private local post and postal history with emphasis on the early postmarks,” Postiljonen notes.

For additional information about the auction, including online catalogs with lot descriptions, visit the Postiljonen website.

The auctions will take place at Hans Michelsensgatan 9 in Malmo.