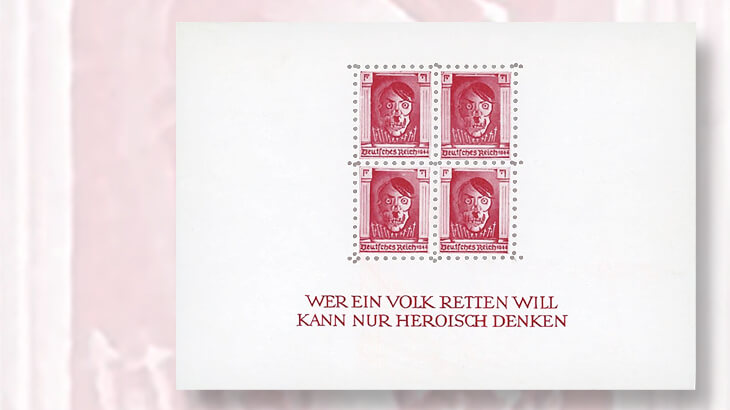 One of only 15 known, a 1944 propaganda sheet produced by the United States Office of Strategic Services and satirizing a 1937 German stamp issue of Hitler sold for $17,250 at Harmer-Schau’s auction at Stampshow in Portland, Ore., in August.

The Harmer-Schau sale at APS Stampshow Aug. 4-6 included a used example of the withdrawn PRC Entire Nation Is Red stamp of 1968, this one with a readable “23 Nov.” dated cancel and only the tiniest of faults. It sold for $46,000, including the 15 percent premium added by the firm.

One of the fascinating aspects of World War II is the fact that both sides engaged in the production of fake stamps as a propaganda tool.

The U.S. Office of Strategic Services, a wartime precursor to the Central Intelligence Agency, produced a souvenir sheet in 1944 satirizing a 1937 German issue honoring Adolf Hitler (Scott B102).

The four stamps show cartoonlike Hitler skulls in place of his portrait, and the color is maroon instead of dark green. The inscription below the four stamps is the original one, but its meaning in this context would appear to inspire thoughts of assassination, rather than reverence: “Wer ein Folk retten will kann nur heroisch denken” (He who wants to save a people can only think heroically).