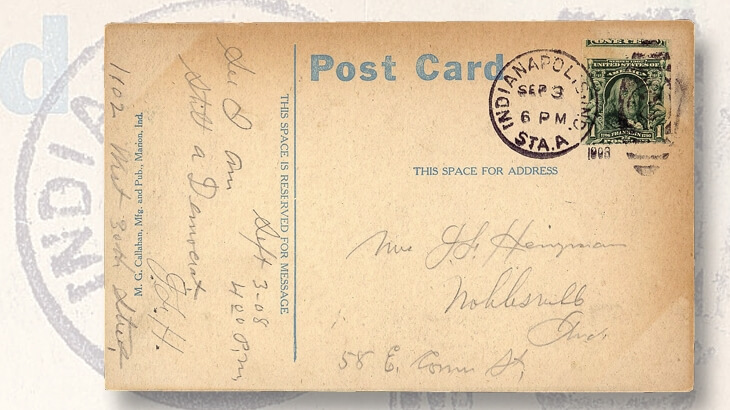 The only known use on cover of a U.S. stamp privately perforated for use in the Parkhurst experimental vending machine brought $14,950 at the August Harmer-Schau auction at Stampshow 2016. 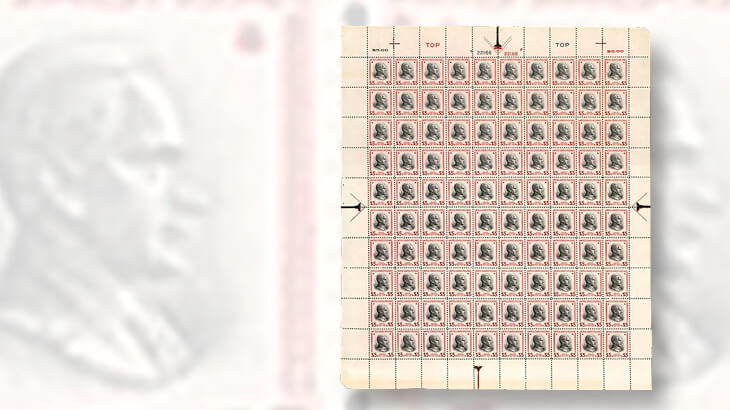 A full sheet of the $5 Calvin Coolidge stamps from the 1938 Presidential series, well-centered with only minor separation of perforations on the selvage, brought $12,650 at Harmer-Schau’s sale at Stampshow 2016. 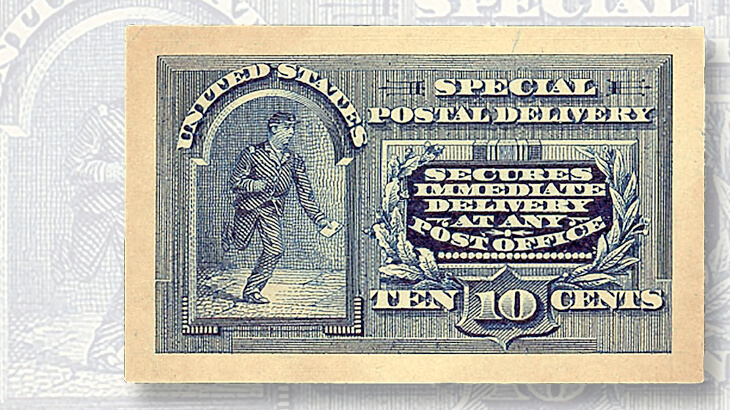 A rare die proof of the 10¢ blue special delivery stamp of 1888 specially prepared for the Panama-Pacific Exposition of 1915 sold for $2,760 at Harmer-Schau’s Stampshow 2016 auction in early August.
Previous
Next

One of the most closely watched items in the Harmer-Schau sale was a postcard franked with a 1¢ Franklin stamp of the series of 1903, issued imperforate and privately converted to a vertical coil stamp (Scott 314V) in 1908 by an inventor named Layton Parkhurst, for use in his experimental vending equipment.

Parkhurst, of Indianapolis, was taking part in a Post Office Dept. competition to develop machines that would automate the vending of single stamps to postal patrons.

The first coil stamps provided to him jammed his dispenser. Being a resourceful sort, he asked for and got imperforate sheets, which he converted to coils on a machine he designed for that purpose.

A set of four little pins in the vending machine moved the stamps forward; their indentations are visible at the top and bottom of the stamp on the postcard.

Recently certified by the Philatelic Foundation in New York, the postcard in the Harmer-Schau sale is the only known use of such a stamp on cover, and the earliest example of any government-issued stamp from Parkhurst’s equipment.

The postcard sold for $14,950, including the 15 percent buyer’s premium added by Harmer-Schau to all lots.

These were part of a set of small die proofs of 413 previous U.S. stamps printed on soft, yellowish wove paper for the Panama-Pacific Exposition in San Francisco in 1915. Just three to five sets were produced.

In the Scott Specialized Catalogue of United States Stamps and Covers, the Panama-Pacific die proofs have numbers ending in “P2a” and the code “PP” in the description. Despite their beauty and great rarity, most are valued at just $2,500 to $3,500.

It was the second time this year that Panama-Pacific die proofs of special delivery stamps had come to auction; comparable results were obtained at World Stamp Show-New York 2016 two months earlier.

Among other highlights of the Harmer-Schau sale were full sheets of the dollar values of the Presidential definitive series of 1938, also known as the Prexies. The sheet of $5 Calvin Coolidge stamps (Scott 834), well-centered with only minor separation of perforations on the selvage, went for $12,650.