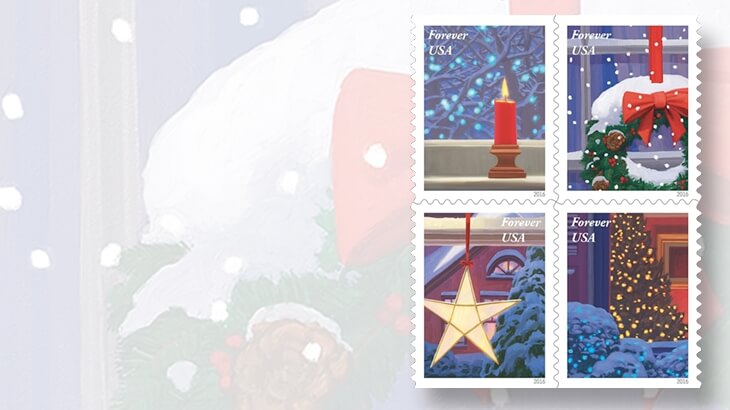 Four new Holiday Windows stamps celebrate the Christmas holiday with a contemporary theme. Each stamp features a view that includes a window, seen from either the inside or the outside.

Details of the show were published in the Sept. 26 Linn’s on page 35.

The ceremony and the stamp show hosting it are both free and open to the public.

These new stamps are nondenominated forever stamps with a postage value of 47¢ to fulfill the current rate for cards and letters weighing 1 ounce or less.

The stamps are being issued in a double-sided pane of 20, which the United States Postal Service describes as a booklet.

Two of the stamps show exterior scenes that include the window of a home, and two show interior views, looking out onto a snowy scene. The setting for all four appears to be the early evening.

A burning red candle positioned on a window sill in a wooden holder is shown on the first stamp. Holiday lights are visible in the background, placed around the bare branches of a tree outside.

A snow-covered Christmas wreath decorated with red ribbon, pine cones, and berries hangs outside in front of frosty windowpanes on the next stamp in the set.

The third stamp returns inside to show a bright star ornament dangling from a red ribbon; the view through the window shows a nearby building with snow-covered roof, and an evergreen tree with snow upon its branches.

The scene viewed from outside on the final stamp shows snow-covered shrubs decorated with lights. Through the window, a tall Christmas tree trimmed with dozens of bright lights can be seen, along with framed artwork on the wall behind it.

Each stamp includes “Forever” and “USA” inscribed in an upper corner.

Low is also the artist for the new Hanukkah stamp planned for this year, which resembles the Holiday Windows set with a similar style and setting.

Although the United States Postal Service said earlier this year that the ASDA stamp show would host first-day ceremonies for the Hanukkah forever stamp and the Nativity forever stamp, those issues were not included on the ASDA schedule as of mid-September.

An inquiry to Postal Service officials about the status of the Hanukkah and Nativity stamps was left unanswered.

A traditional Christmas stamp, the Florentine Madonna and Child forever stamp, will be issued Oct. 11 with a 12:15 p.m. ceremony at the National Gallery of Art, West Garden Court, at Sixth Street and Constitution Avenue in Washington, D.C.

Technical details and first-day cancel ordering information for the Holiday Windows stamps are presented below.

Standard ordering instructions apply. Collectors requesting first-day cancels are encouraged to purchase their own stamps and affix them to envelopes. The first-day cover envelopes should be addressed for return (a removable label may be used), and mailed in a larger envelope addressed to Holiday Windows Stamps, Stamp Fulfillment Services, Cancellation Services, 8300 NE Underground Drive, Pillar 210, Kansas City, MO 64144-9998.

Requests for first-day cancels must be postmarked by Dec. 6.