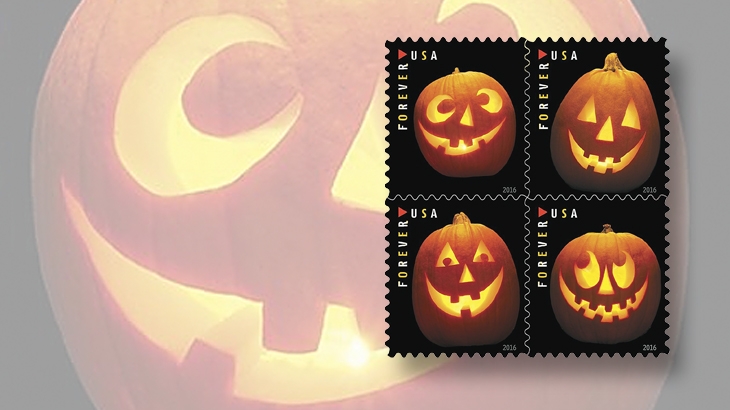 The U.S. Postal Service has revealed that a die-cut shift is expected to affect 5 percent of the Jack-o'-Lantern stamps being issued Sept. 29.

It sounds like something spooky happened to the United States Halloween stamps.

The United States Postal Service released a statement Sept. 28 acknowledging that when its Jack-o’-Lanterns forever stamps are issued Sept. 29, approximately 5 percent of the production run may be affected by out-of-register die cuts.

The specific nature of the die-cut variation was not described, and the Postal Service noted in advance that it will provide no additional comment.

“Everything we do at Banknote Corporation of America is focused on making products with the highest standards,” Lane’s statement added. “We apologize for this oversight in our quality control process. We remain committed to provide the highest level of quality and service and look forward to our continued partnership for product innovation.”

The Postal Service adds that “ample supply has been distributed nationwide and will meet customer needs — no special orders will be taken.”

The stamps are valid for paying postage on letters and packages, and the USPS has apologized for any inconvenience.

Depending on the severity of the die-cut variation, die-cut shifts are normally considered production freaks and are not listed as errors by Scott catalog editors. If the shift is severe enough to result in a stamp that is partially or wholly imperforate, such varieties are examined by editors of the Scott Specialized Catalogue of United States Stamps and Covers to determine if they are to be listed as production errors.