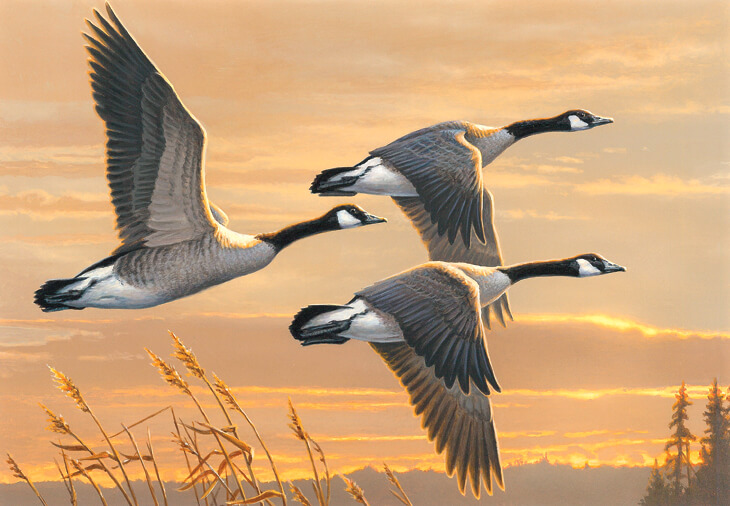 An acrylic painting by James Hautman of three Canada geese in flight was chosen as the winner of the 2016 federal duck stamp contest, and will serve as the design for the federal duck stamp that will be issued in the summer of 2017.

The acrylic painting represents the fifth federal contest winner for Hautman, tying him with two other artists whose artwork has been chosen five times for the honor of appearing on the annual federal migratory bird hunting and conservation stamp: Maynard Reece (on the 1948, 1951, 1959, 1969 and 1971 stamps) and Hautman’s older brother Joseph (on the 1992, 2002, 2008, 2012 and 2016 stamps).

A third Hautman brother, Robert, is also a past winner of the competition, with his paintings appearing on the 1997 and 2001 stamps.

James Hautman’s paintings have previously illustrated the federal duck stamps issued in 1990, 1995, 1999 and 2011. The newly chosen winner will be the featured illustration on the federal stamp that will be issued in late June 2017.

With his 1990 win, Hautman became the youngest artist ever to win the federal duck stamp contest. In 2011, he was named the Ducks Unlimited artist of the year.

Rebekah Knight took second place in this year’s contest with her acrylic painting of a single brant. Her painting of a redhead duck was chosen for the junior duck stamp issued in 2006.

The U.S. Fish and Wildlife Service reports that of 152 entries in this year’s contest, eight made it to the final round of judging.

The eligible species for this year’s competition were the Canada goose, brant, northern shoveler, red-breasted merganser, and Steller’s eider.

The annual contest, which is open to all artists age 18 and older who are U.S. Citizens, nationals or resident aliens, was held this year at the Academy of Natural Sciences in Philadelphia, Pa. The winner was announced Sept. 10.

“I congratulate James Hautman on his win,” said Steve Guertin, deputy director of the U.S. Fish and Wildlife Service, which administers the contest. “And this is not just any piece of art, but one whose impact will be felt for generations to come. Duck stamps have helped to protect more than six and a half million acres of waterfowl habitat in our National Wildlife Refuge System — now that is a lasting legacy.”

The contest winner receives no prize other than a pane of the stamps bearing the design, signed by the U.S. secretary of the Interior.

However, the prestige of winning the contest helps to sell prints of the paintings, which benefits the artist financially.

Federal duck stamps are not valid for postage, but they are popular with collectors and are illustrated and valued in the Scott Specialized Catalogue of United States Stamps and Covers.

The funds collected from the sale of the stamps raise about $25 million each year to conserve and protect wetland habitats in the National Wildlife Refuge System, according to the Fish and Wildlife Service.