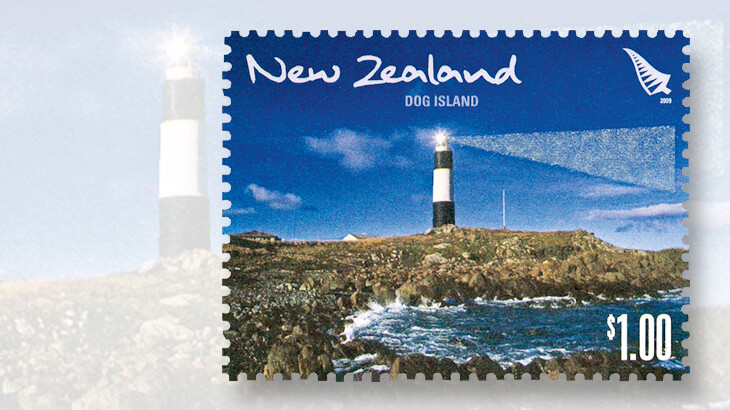 New Zealand life insurance stamps have ended, but regular N.Z. postage stamps with lighthouse designs occasionally appear, such as this one, from a 2009 set of five different images. 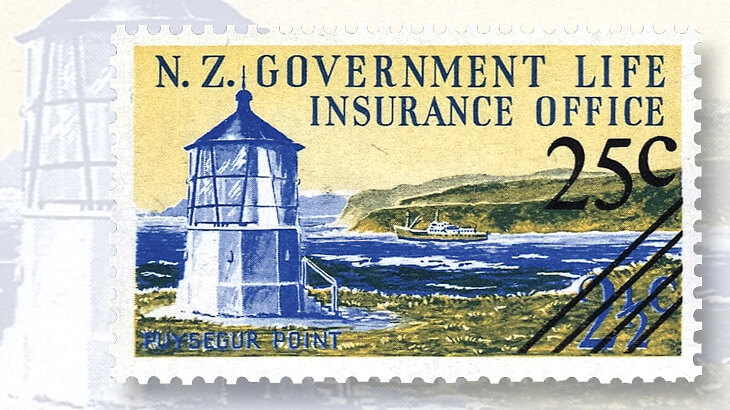 The 2½¢ Puysegur Point Lighthouse stamp of 1969 received a 25¢ surcharge in 1978. The 1879 lighthouse burned in 1942 and was upgraded to electric lighting the following year. 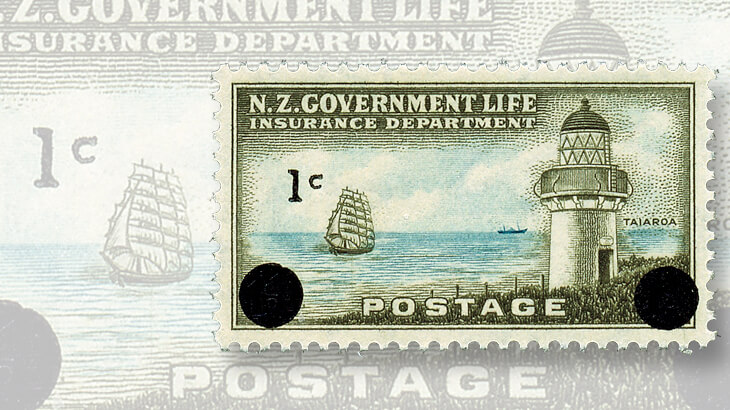 The 1d Taiaroa stamp of 1947 was overprinted in 1967 with black dots to obscure the original denomination, and a surcharge of 1¢ in the new decimal currency was added. 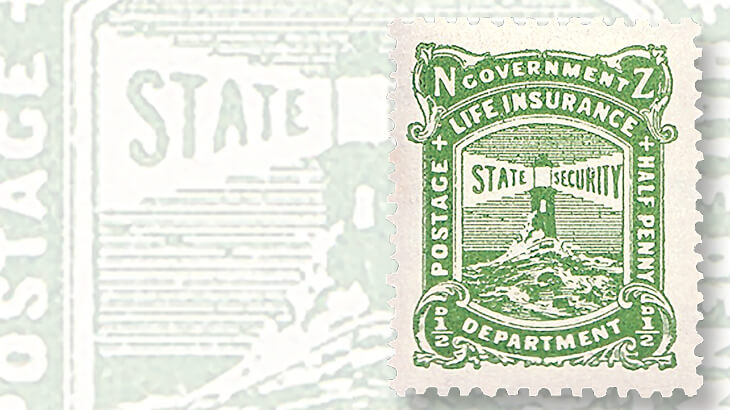 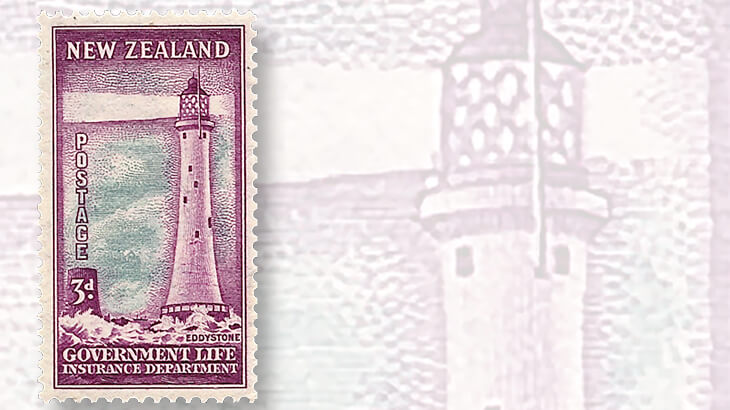 Not in New Zealand, but one of the most famous lighthouses in the world, the Eddystone, off the coast of Devon in England, is among the eight structures shown on the New Zealand life insurance stamps of 1947. 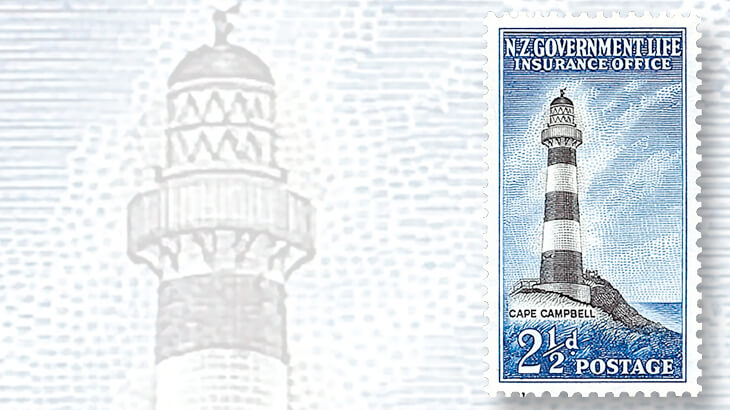 Cape Campbell lighthouse appears on the 1963 2½-penny life insurance stamp. The original 1870 structure was wooden, replaced by a steel tower in 1905. 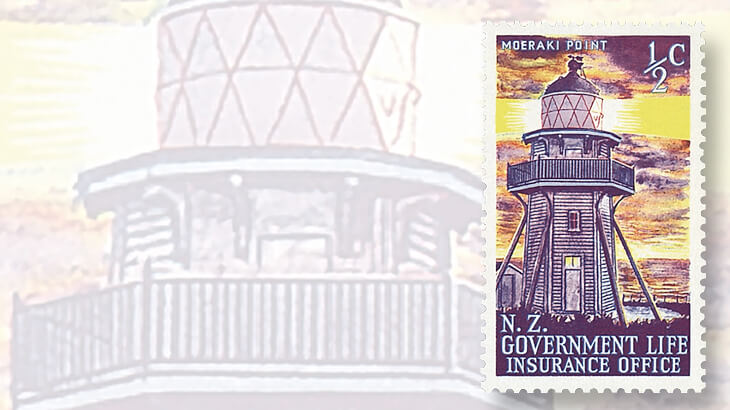 The Moeraki Point Lighthouse appears on the first issue designed in the new colorful style of life insurance stamps in 1969. 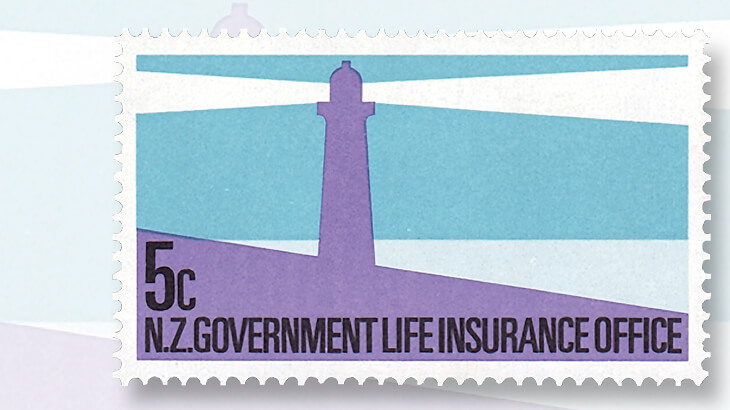 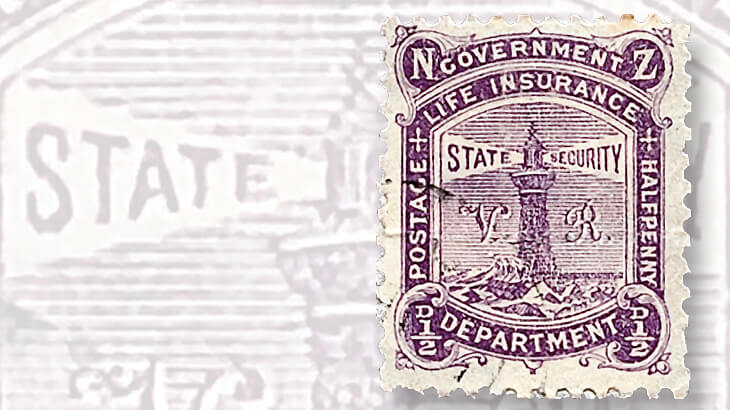 New Zealand once sold life insurance policies through its post offices. This 1891 stamp was the first for use by the Government Life Insurance Dept.
Previous
Next

Because this was a government service, the Government Life Insurance Dept. had postal franking privileges and paid for its postage through the Post and Telegraph Dept. This method worked for several years until there was a dispute regarding the postage costs.

The solution was to issue stamps specifically made for and restricted to the New Zealand Government Life Insurance Dept.

Thus, on Jan. 2, 1891, six stamps were issued for use by the Government Life Insurance Dept., with a lighthouse design to symbolize safety.

The first illustration here shows a ½-penny stamp (Scott OY1) that was the first of the eventual 56 lighthouse-design life insurance stamps issued by New Zealand.

The rays of light emanating from the lighthouse include the words “State Security,” with the letters “V” and “R” straddling the structure. These initials refer to the reigning Queen Victoria (in Latin, Victoria Regina). The stamps were designed by W.B. Hudson and J.R. Rogers.

Three more V.R. Lighthouse stamps (Scott OY7-OY9) were issued in 1903-04, with different watermarks and gauges of perforations, despite the fact that Queen Victoria had died Jan. 22, 1901, and her eldest son, Albert Edward, became King Edward VII.

In 1905, new Government Life Insurance Dept. stamps were released with a different lighthouse image (and without the “V.R.”), one that continued in use on government life insurance stamps until 1947. The colors changed, the watermarks changed, and the perforations changed, but the lighthouse stayed the same.

Eight new lighthouse images came into use on the insurance stamps from 1947-65. One of the lighthouses shown is not in New Zealand, but is considered the most famous existing lighthouse in the world: the Eddystone Lighthouse, off the coast of Devon in England. It appears on the 3d stamp in this set (Scott OY33).

These stamps had a second life when, in 1967, New Zealand changed from pounds sterling to decimal currency.

Six of the 1947-65 stamps were overprinted with black dots or bars to block out the former denominations, and surcharged denominations in cents were applied. The 1d Taiaroa Lighthouse stamp with 1¢ surcharge is illustrated here (Scott OY37).

In 1978, the Puysegur Point stamp received four diagonal bars to eliminate the former 2½¢ denomination for a substantially upgraded surcharge of 25¢.

The last of the Government Life Insurance Office stamps appeared in 1981 in a set of six, Scott OY51-OY56. This time, rather than showing a literal depiction of a specific New Zealand lighthouse, the stamps all have the same multicolored design of a generic modern interpretation of a lighthouse.

In 1987, the New Zealand Government Life Insurance Office became Tower Corp., one change among many when New Zealand governmental departments were converted to state-owned businesses.

Life insurance stamps showing lighthouses are no longer issued by New Zealand, but the country still produces some regular postage stamps with beautiful lighthouse designs, such as the set of five in 2009 (Scott 2226-2230) depicting some of the structures previously shown on life insurance stamps: Dog Island, Cape Brett, and Cape Egmont.

If you have an interest in these and other lighthouse stamps, contact the Lighthouse Stamp Society, or write to Dalene Thomas, 1805 S. Balsam St., Apt. 106, Lakewood, CO 80232.