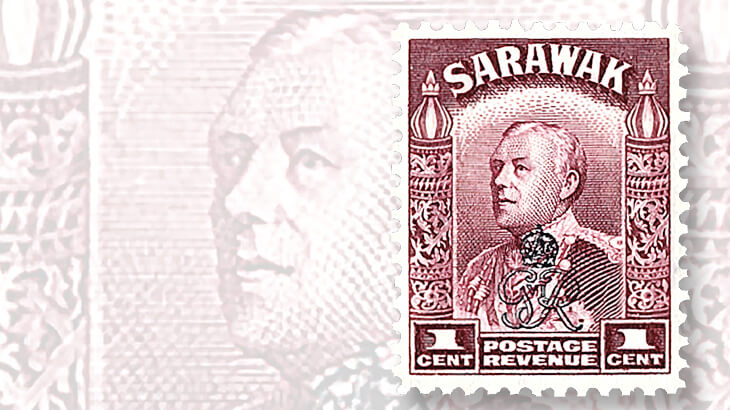 The 1947 Sarawak set of 15 Sir Charles Vyner Brooke stamps overprinted with a crown and “GR” monograph is a good buy in mint never-hinged condition or used condition at 2016 Scott Classic Specialized Catalogue of Stamps and Covers 1840-1940 values.

The history of Sarawak reads like it might have been written by G.A. Henry or H. Rider Haggard as assisted by Richard Halliburton. Presently one of the federated states of Malaysia, Sarawak shares the island of Borneo with the Kingdom of Brunei, the Malaysian state of Sabah, the Malaysian federal territory of Labuan, and Kalimantaan (Indonesian Borneo).

In the 19th century, Sarawak was claimed by the Sultan of Brunei. Unable to establish control of the area, the sultan sent his uncle to enforce his rule. In 1841, the sultan’s uncle induced Sir James Brooke, an English explorer and adventurer, to become the governor of the territory and to pacify it.

Brooke battled pirates and headhunters to establish control of the territory. In 1846, at the death of the sultan’s uncle, Brooke became the Rajah of Sarawak, founding the White Rajah dynasty. The dynasty remained in power until 1946, when the territory became a British crown colony.

This long, inexpensive set is popular with collectors of classic stamps, British Empire collectors, and magpie collectors (generalists who collect whatever happens to catch their eye and tickle their fancy). It is a good buy at Scott catalog value.