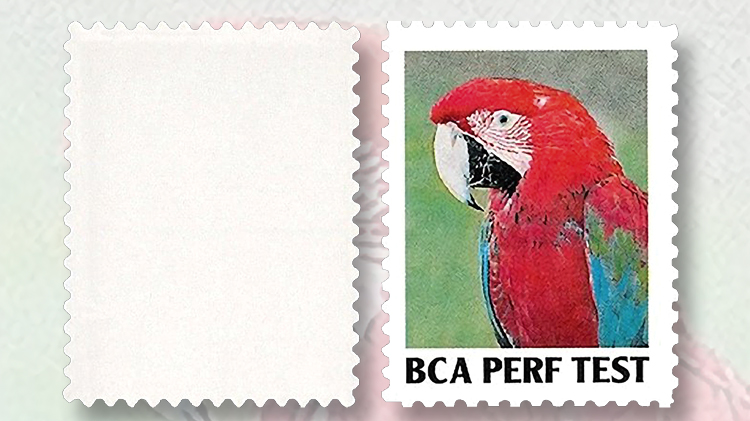 The Blank Parrot stamp received a major Scott number, TD128A, in the 2017 Scott Specialized Catalogue of United States Stamps and Covers. It is shown here along with the test stamp showing the parrot (TD128). Both stamps were printed by Banknote Corporati

The 2017 Scott Specialized Catalogue of United States Stamps and Covers is going to be available soon and the Test Stamps section has been extensively revised and updated.

Test stamps are stamps produced by printers, including the Bureau of Engraving and Printing and private printers, when the United States Postal Service and its predecessor, the U.S. Post Office Department, needed dummy stamps to test printing presses or stamp-printing processes or equipment.

The Scott catalog refers to these stamps as test stamps, but the Dummy Stamps Study Group of the United States Stamp Society says that “test stamp” is a misnomer. These stamps are not post office accountable paper, but they are highly collectible. They are documents of record for the development and testing of stamp printing equipment, vending equipment, and stamp-affixing equipment. As such, they serve an important role in stamp production and distribution.

New major numbers have been added to both the test stamps and booklets listings in the 2017 Scott U.S. Specialized catalog. Among the new listings is the addition of a perforated version of the 1960s Stamp-E-Z Postage Stamp Affixer light purple test coil, perforated gauge 10¼ (Scott TD104A). The used value is a dash, indicating that not enough information is available to establish a catalog value.

A new listing has been added for a blank Parrot test stamp printed by Banknote Corporation of America (TD128A). This stamp is valued at $40 used and $150 for a block of four.

Among the many changes and new listings in the test booklets section, the previous Scott TDB81, the 1989 Bureau of Engraving and Printing Eagle and Flag pane of 12, is now renumbered as TDB81a. The footnote for the new TDB81 states, “… No. TDB81 does not have a cover, and does not require backing paper since it is printed on paper with water-activated gum. No. TDB81a panes exist not fully trimmed with colored EE registration markings in the left or right margins.”

These are only a few of the myriad changes made in the Test Stamps section, which has been substantially revised and reformatted.

The Scott editors are grateful to Terry Scott, chairperson of the Dummy Stamps Study Group, and the group’s members who have helped us make this section more useful to collectors.

Whether you refer to them as test stamps or dummy stamps, these stamps can be difficult to find, but they are worth the search. If you are interested in learning more about the possibilities of collecting these stamps, visit the group online or contact Terry Scott at trs@napanet.net.