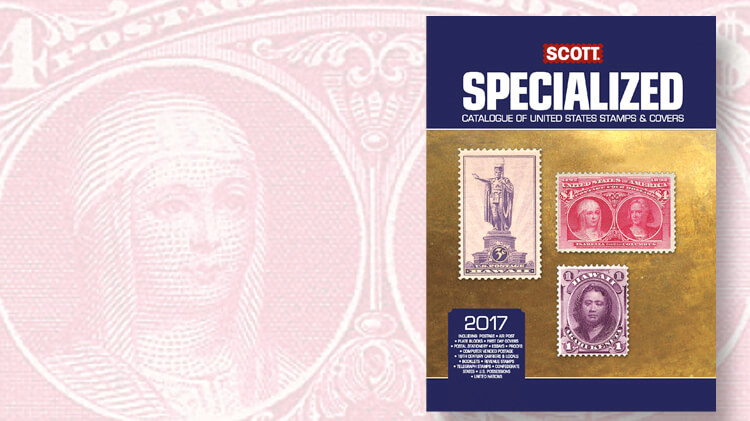 Many important editorial changes enhance the 2017 Scott Specialized Catalogue of United States Stamps and Covers. More than 5,000 value changes have been made.

Almost 5,400 value changes have been made in the 2017 edition of the Scott Specialized Catalogue of United States Stamps and Covers.

Before we review some of the important value changes, let’s turn our attention to the many significant editorial enhancements that have been made in the catalog this year.

As always, hats off to Scott editor emeritus James E. Kloetzel for working tirelessly on the hundreds of revised and expanded listings in the 2016 catalog. He and other Scott editors stayed busy adding and expanding listings and making significant improvements throughout the catalog. Special thanks to Charles Snee for leading this colossal project from the home office in Sidney, Ohio.

As with the 2016 edition of the Scott U.S. Specialized catalog, the biggest push this year was to get a great many desired editorial enhancements into the catalog. These enhancements include a number of new earliest documented use dates (EDUs) in the Postage section and other sections.

Many new listings for errors appear for the first time in the 2017 U.S. Specialized catalog, perhaps the most significant and interesting of which is an imperforate error of the normally perforated No. 370, the 1909 2¢ Alaska-Yukon issue. This error can only be differentiated from the issued imperforate, No. 371, when it is a margin single or multiple and has a plate number 5209 attached in the selvage. That plate number was used only to print the perforated version of the stamp. This situation is similar to the No. 610b 2¢ Harding imperforate. The number of other new errors in the U.S. Specialized catalog is large this year.

In the Registry Exchange Labels section, new discoveries continue to be made, resulting in a change of census numbers for nine cities. For example, the number of documented covers with the printed San Juan, Puerto Rico, exchange label moves from seven to eight.

Plate blocks of four listings in the Postage Due section are now valued in never-hinged condition. A number of new plate-block listings have been added to the Official Stamp section. In addition, seven new block-of-four listings appear for Official specimen stamps, where one stamp in the block shows the “SEPCIMEN” error.

In the First Day Covers section, the 2¢ Thomas Jefferson on Silkote paper (Scott 1033a) is listed for the first time. This FDC is not often seen in the marketplace, and is thus valued at $10,000 in italics.

In the Vending and Affixing Machine Perforations section of the catalog, a new type V has been listed for the Mailometer group. Similar to type II perforations, the holes on the new type V are slightly smaller in diameter, and they are spaced slightly farther apart. A new illustration accompanies the new listings.

Major enhancements and the addition of new major numbers have been made in Computer Vended Postage section. Be sure to review these listings carefully because some Scott numbers have changed. A total of 16 new computer-vended test stamps also have been added. Some of these are valued, while others are dashed because not enough market data is available at present.

In Stamped Envelopes, paper differences (wove versus laid) are incorporated into the listings for the Mercantile dies, Nos. U400-U419. The double impression listing for No. UC6, previously unlettered, is now properly listed as Scott UC6b. The unlettered listing reflected an older approach, when back-of-the-book stamps were not treated with the same respect and specialization as stamps from the front of the book.

In Revenues, many new varieties such as plate scratches, double transfers, foreign entries, and bisects used on document have been added. Based on input from several revenue specialists, two narcotic tax stamps, Scott RJA1 and RJA16, have been deleted. It has been determined that both of these stamps are fakes.

In Essays, enhancements include new header notes that make it clear which early essays comprise the group submitted by various printers for the 1851 issue contract. This information, while in the catalog previously, was not clearly marked for what it represented, and one of the stamps was attributed to the wrong printer. Also, the essays for the Official Seals have been reworked completely, resulting in listings and illustrations that are now clear and accurate.

A new postal counterfeit of the 2015 Rose and Heart forever stamp has been added as No. 4959(CF1). Why a faker in this day and age would pick an engraved stamp to counterfeit is hard to understand. Except for the die cutting, most people might be fooled by this stamp, but there are many differences between the counterfeit and the genuine stamp that are explained in the footnote. The editors would welcome evidence of on-cover use of this new counterfeit.

The number of enhancements made in the Test Stamp section is truly mind-boggling. They cover both stamps and booklets and include new major numbers in both sections. The ATM and Convertible Booklet Test Panes section has been completely reformatted to include single stamps as well as panes. Some of these items are not currently known as full panes. Specialists will want to review both of these sections carefully.

In U.S. Possessions, Canal Zone has had listings added for the use of wrong type fonts for Nos. 85-95 and J18-J20. More specialized listings for stamps on cover have been added.

In the 2016 U.S. Specialized section for Philippines, blocks of four were replaced by plate blocks listings for Nos. 241-353a. Now, for 2017, all other Philippines listings from No 354 to the end of postage, all air posts, special deliveries, postage dues, Officials, and Japanese occupation issues have had hinged and never-hinged plate-block or inscription-block listings added. This is a major enhancement for collectors and dealers of Philippines stamps.

This review provides only a glimpse of the myriad editorial additions and improvements in this year’s U.S. Specialized catalog. Be sure to pay attention to the many footnotes throughout the catalog that have been added or revised for clarity.

Once again, as for the last couple of years, action in the marketplace is in very high-grade stamps and rarities. Some rarities were sold during the past year, and some new values have resulted, such as in Officials and Newspaper stamps. As one might expect, the bulk of the value changes, more than 2,000, are concentrated in the Postage section.

Values for very fine stamps, in general, are steady or, in a few cases, somewhat softer. Hundreds of value changes are found in the 2017 “Scott Stamp Values U.S. Specialized by Grade.” This special section of the catalog is sometimes referred to as the “yellow pages” because the pages have a yellow border to make them easy to locate.