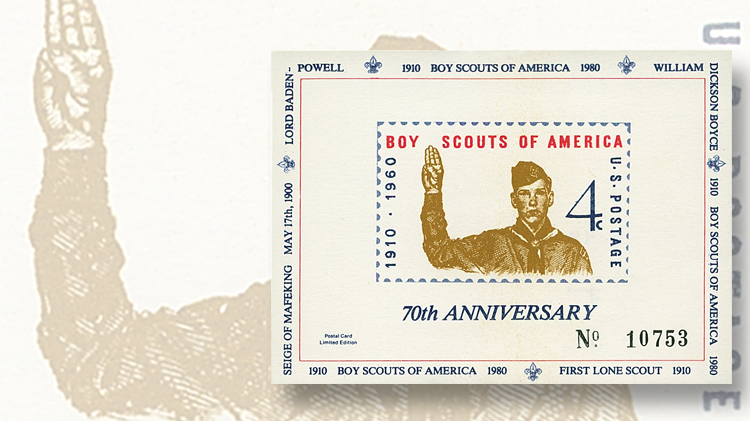 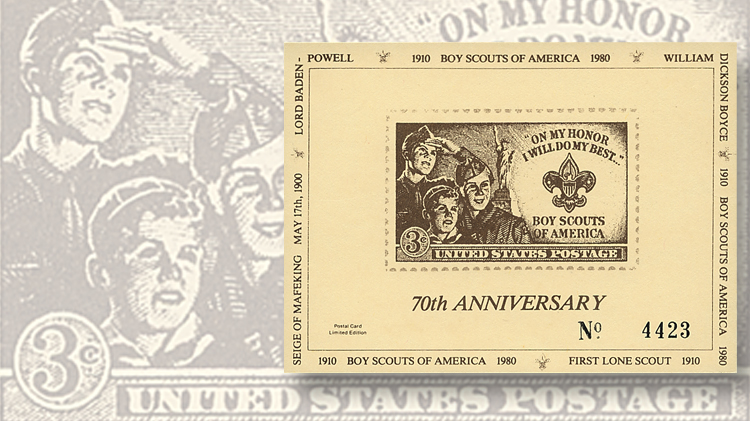 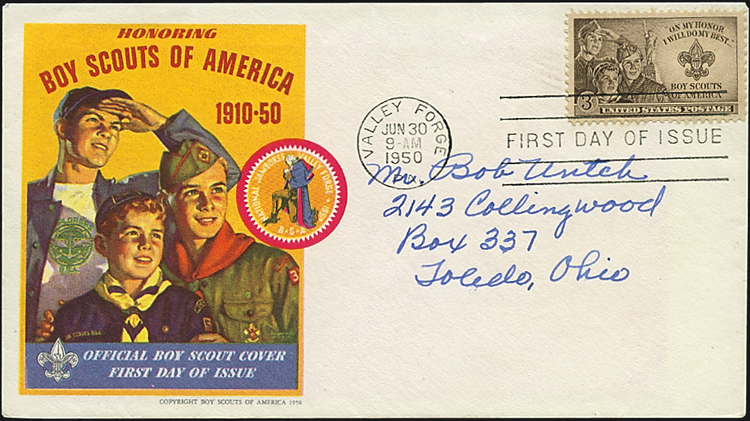 The design of the 1950 3¢ Boy Scouts commemorative stamp was based on the poster shown as a cachet on this first-day cover. The Boy Scouts of America has not released the names of the boys who posed for the poster, but their faces on the stamp are not muc
Previous
Next

Frederick Oppliger is a serious Scouts on stamps collector. When he saw my write-up on the souvenir card for the 70th anniversary of Boy Scouts of America in the March 9, 2015, issue of Linn’s, he began to go through his 65-year accumulation of material to see if he had an example.

I had reported that my example of this card from 1980 was sequentially numbered 10,753. Oppliger found several examples in his collection, the highest number being 19,041. That suggests a print run of at least 20,000.

In addition, Oppliger located a companion piece, a card picturing the 1950 3¢ Boy Scout commemorative stamp (Scott 995). Of the three examples he has seen of this card, the high number is 4,423.

Oppliger points out that the name is an error, because the proper rendering would be “Lord Robert Stephenson Smyth Baden-Powell.”

Boyce is less well-known, but holds an honored place in United States scouting history. He was a newspaper publisher who saw scouting first hand in England, and came back to the United States to get it started here.

The 1950 3¢ stamp reminds me of my continuing quest to identify living people shown on U.S. stamps. There can be little doubt that this stamp is based on the poster pictured on the cachet of the first-day cover shown nearby.

“The original poster from which the likenesses of the three Scouts were taken apparently depicted real people. Given that [stamp designer Charles] Chickering respected fully the elements of the poster, there was some fear expressed that, contrary to rules and regulations, real people were to be shown on an American postage stamp. As with the similar case of the 1943 Navy commemorative stamp (Scott 935), the U.S. Post Office Department said that no one could be identified because the faces had been sufficiently altered.”

There are two problems with this rendering. First, the limitation is actually in law dating back to the 1860s, and it prohibits the honoring of a living person. The Postal Service and its predecessor the Post Office Department have often taken this as license to allow portrayal of living people who they assert are incidental to what the stamp honors.

Secondly, contrary to the Post Office Department’s statement, the sailors on the Navy stamp are easily identified from the original photograph, as has been documented by this column, and this was not the first time that living individuals were easily identified on U.S. stamps.

However, we are still left with the 3¢ Boy Scout stamp question because the Boy Scouts of America has not released the names of the Scouts, or perhaps models, who were the subjects of the original poster. I hope that one day someone who knows the history will speak out.

I maintain a list of U.S. stamps on which living people are portrayed. The list now includes more than 60 stamps. If you would like a copy of this list, write to me, John Hotchner, at Box 1125, Falls Church, VA 22041-0125, and enclose a stamped, addressed envelope and 30¢ in mint postage to cover the cost of photocopying.

To help new collectors get started, first find out what they really want