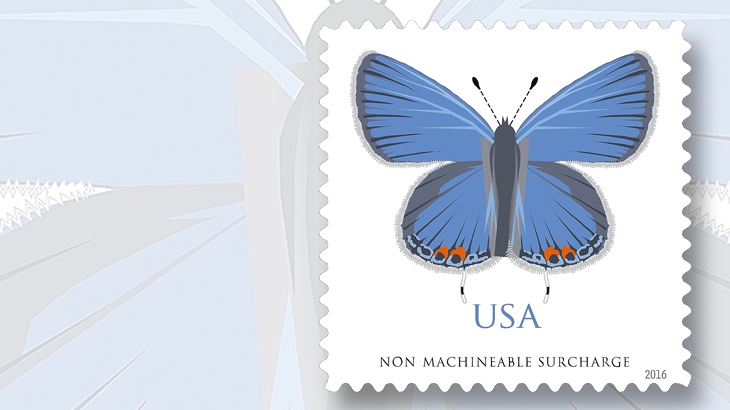 The United States Postal Service is issuing a new nondenominated Butterfly stamp for the nonmachineable first-class rate, which currently is 68¢ for mail weighing 1 ounce or less.

The square stamp, which was initially announced in August without technical details or an issue date, depicts an eastern tailed-blue butterfly.

The stamp is scheduled to be issued Sept. 24 in Kansas City, Mo. The Postal Service has not announced plans for a first-day ceremony, and it appears likely that there will be no ceremony for this stamp.

The new stamp is the sixth in a series of square Butterfly stamps issued to fulfill the nonmachineable first-class rate, which applies to certain irregularly sized envelopes, including square greeting card envelopes.

Some greeting card manufacturers have printed an image of a butterfly in the envelope stamp corner to indicate that the Butterfly stamp fulfills the surcharge rate.

Engeman uses computer software to create the butterfly images that have appeared on all of these stamps.

The image of the eastern tailed-Blue on the stamp is highly stylized, according to the Postal Service, and not an exact replica of the tiny insect.

“The Eastern Tailed-Blue butterfly (Cupido comyntas) is named for the iridescent blue color of its upper wing surface, more vivid in the male, and for the short, thread-like tail on each hind wing,” the Postal Service said in an Aug. 30 press release. “Females are often slate grey, sometimes with vivid blue coloration close to the body. This 2016 stamp depicts a first-generation male, which displays the species’ brightest coloration. Each year sees two or more generations, the latter being less colorful.”

This particular species is very small, with a wing span that barely extends beyond 1 inch, making the image on the stamp close to life size.

The eastern tailed-blue is generally abundant and found throughout much of the Eastern United States and the Midwest.

As with earlier issues in this series, the stamp will be issued in a pane of 20. The words “Non-machineable surcharge” appear on the stamp, printed below the butterfly illustration.

Like a forever stamp, this stamp will always be valid for the rate printed on it, even if that rate changes in the future. Though designated for nonmachineable first-class mail, the stamp can be used on any domestic or international mail.

The previous issue in the Butterfly series, depicting the eastern tiger swallowtail butterfly, was the first nondenominated stamp for the nonmachineable first-class rate. It was issued when that rate was 71¢, but a rate decrease at the beginning of 2016 dropped the stamp’s postage value to 68¢.

Although the Postal Service does not appear to be offering uncut press sheets of this issue, it does have a first-day cover with digital color postmark, which sells for $1.83 as USPS item No. 119521. The design shows the words “Eastern Tailed-Blue” in pale blue script, surrounded by multicolor floral trim.

Technical details and first-day ordering information for the new nondenominated (68¢) Eastern Tailed-Blue Butterfly stamp can be found below.

Collectors requesting first-day cancels are encouraged to purchase their own stamps and affix them to envelopes. The first-day cover envelopes should be addressed for return (a removable label may be used), and mailed in a larger envelope addressed to Eastern Tailed-Blue Butterfly Stamp, Stamp Fulfillment Services, Cancellation Services, 8300 NE Underground Drive, Pillar 210, Kansas City, MO 64144-9998. Requests for first-day cancels must be postmarked by Nov. 24.