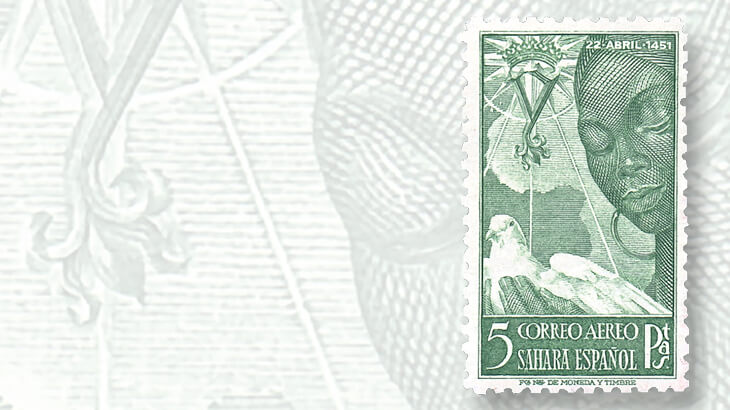 The Spanish Sahara 5-peseta 500th Anniversary of the Birth of Queen Isabella I airmail stamp (Scott C17) is a good buy in the grade of fine-very fine and unused hinged condition at $35 or more.

Although they were never as widely collected as British and French colonial issues, Spanish colonies have an active and dedicated following.

One of the most interesting Spanish colonies is Spanish Sahara. The colony comprises a chunk of the Sahara desert lying along the Atlantic seaboard of North Africa.

Spain founded the colony in 1888 and abandoned it in 1975. It was quickly occupied by the Kingdom of Morocco. Morocco’s claim on the territory has not received de jure recognition. Most of the native population now lives in refugee camps in the Algerian desert.

Spanish Sahara issued its first stamps in 1924 and its last in 1975. Many of the stamps feature local fauna and are popular with topical collectors. On April 22, 1951, Spanish Sahara issued a 5-peseta airmail stamp to commemorate the 500th anniversary of the birth of Queen Isabella I (Scott C17).

The stamp design shows an African woman holding a white dove superimposed on an outline map of Africa. The stamp was not widely distributed. It also had production problems, and most of the stamps produced are not well-centered.

When Bacchus served man his first beer on a stamp: Tip of the Week