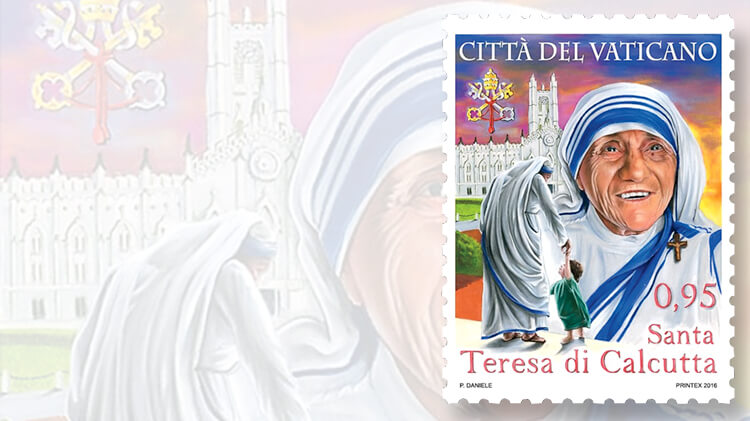 A stamp from Vatican City commemorates the Sept. 4 canonization of Mother Teresa. 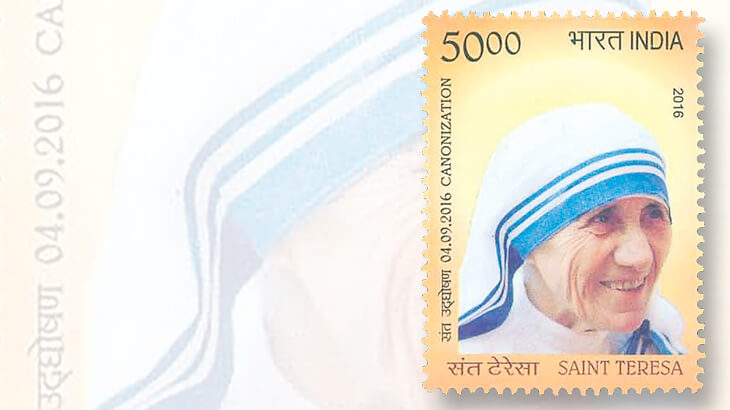 India issued a souvenir sheet Sept. 4 to honor Mother Teresa being declared a saint. The 50-rupee stamp from that sheet is shown. 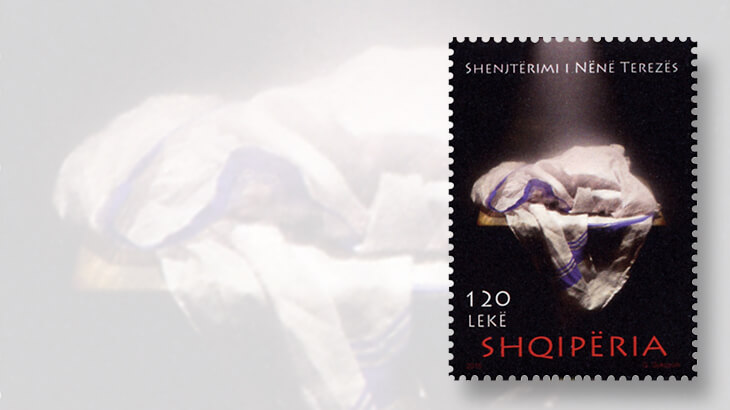 Albania’s stamp for the canonization of Mother Teresa shows the white and blue sari she wore.
Previous
Next

Pope Francis declared her St. Teresa of Calcutta (Kolkata) before an estimated crowd of 120,000 Sunday, Sept. 4, at St. Peter’s Square in Vatican City.

Born Aug. 26, 1910, in Skopje, Macedonia, to parents of Albanian heritage, Mother Teresa spent much of her life in India, where she founded the congregation of the Missionaries of Charity in 1950 in Calcutta to serve the poorest of the poor.

She once said: “By blood, I am Albanian. By citizenship, an Indian. By faith, I am a Catholic nun. As to my calling, I belong to the world. As to my heart, I belong entirely to the heart of Jesus.”

The 0.95 Vatican City stamp shows two images of Mother Teresa with a large church in the background.

The new-issue announcement from the Vatican City’s philatelic and numismatic office doesn’t identify the church. However, Matters India, a website for religious news, says it is St. Paul’s, the Anglican cathedral in Calcutta, not the city’s Roman Catholic Cathedral of the Most Holy Rosary.

The souvenir sheet from India contains a 50-rupee stamp featuring a photograph of Mother Teresa. The selvage includes another photograph of the new saint and a view of a crowd in St. Peter’s Square.

Albania’s 120-lek stamp depicts the white sari with three blue stripes worn by Mother Teresa. According to an article by Stuti Das on the Mother Teresa Center website, the color white represents truth and purity, and the three blue stripes signify the vows of poverty, obedience, and chastity and service to the poorest of the poor.

Albania issued this stamp in panes of nine and in a souvenir sheet of one with a picture frame in the selvage.

To learn more about these stamps, visit the websites of the postal administrations of Albania, India, and Vatican City.