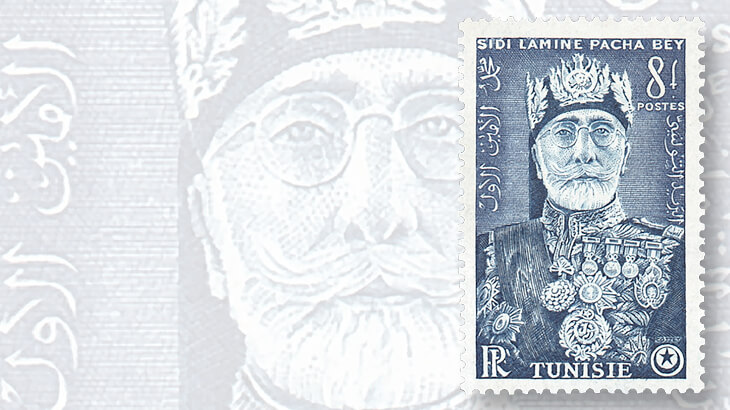 Tunisia is the northernmost country on the African continent. It is situated on the Mediterranean Sea with Algeria to the west and Libya to the east. The root stock of its population of 11 million is Berber with an overlay of Arabic language and culture. In the 12th century B.C., Phoenician colonists occupied the area along the coast and founded the great city of Carthage, destined to become the arch enemy of Rome.

After Carthage’s final defeat in 146 B.C., it became part of the Roman Empire. Tunisia was conquered by Arab Muslims in the eighth century and the people were forced to convert to Islam. Control passed to the Ottoman Empire in 1534. France conquered Tunisia in 1881, but retained the bey as their proxy ruler. Tunisia gained independence in 1956. Today it remains a secular republic.

Among the last and one of the most attractive sets of French Colonial Tunisia is the set of five Mohammed VIII al-Amin, Bey of Tunis stamps (Scott 253-257) issued in October 1954. The majestic-looking bey decked out in his regal finery makes a fine display. The bey ascended to the throne of Tunis on May 15, 1943, after his cousin, Mohammed VII, was deposed by Free French forces for collaborating with the Vichy government of France. Mohammed VIII declared Tunisian independence on March 20, 1956, but was deposed by republican forces led by future president Habib Bourguiba on July 25, 1957. He was allowed to remain in Tunisia and never renounced his right to the throne, dying on Sept. 30, 1962.

Although this set lies outside the classic period, which ends somewhat arbitrarily at 1940, it remains very popular with collectors of classic stamps, as well as with French and French colonial collectors. The 2016 Scott Standard Postage Stamp Catalogue values the set in mint never-hinged condition at $6.35. This set is in demand and is selling at full Scott catalog value or perhaps a bit more.