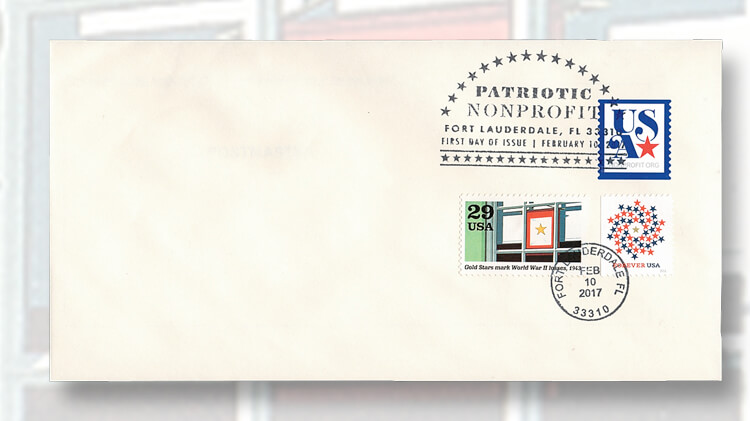 To create a first-day cover for the new USA Star nonprofit coil issued Feb. 10, additional stamps were added to fulfill the first-class letter rate. In this instance, the two additional stamps each show a star. 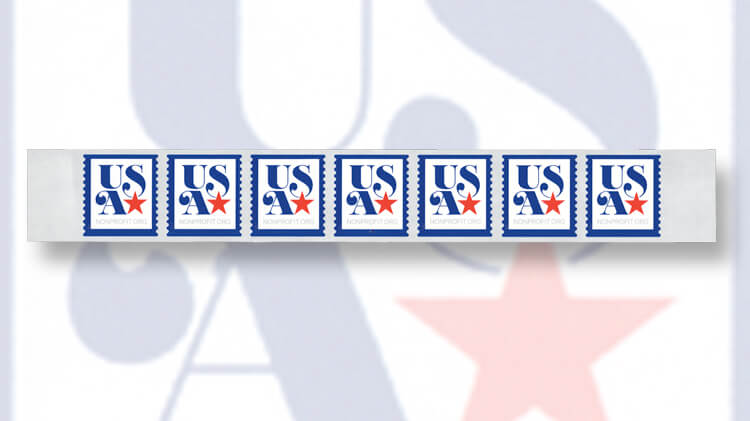 The 2017 version of the USA Star coil has a slightly smaller central design and an added blue frame. This plate-number strip of seven stamps includes a plate number single in the center position. 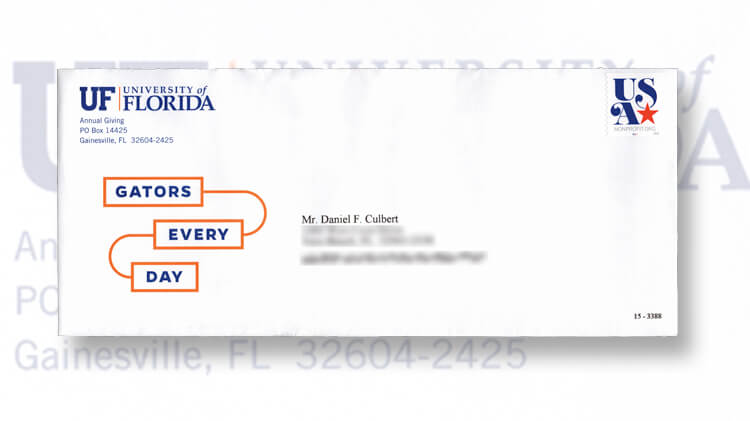 The 2016 USA Star coil stamp for nonprofit mail was in use for less than 10 months before a replacement version was issued. This example on cover includes the tiny plate number at the very bottom of the stamp. 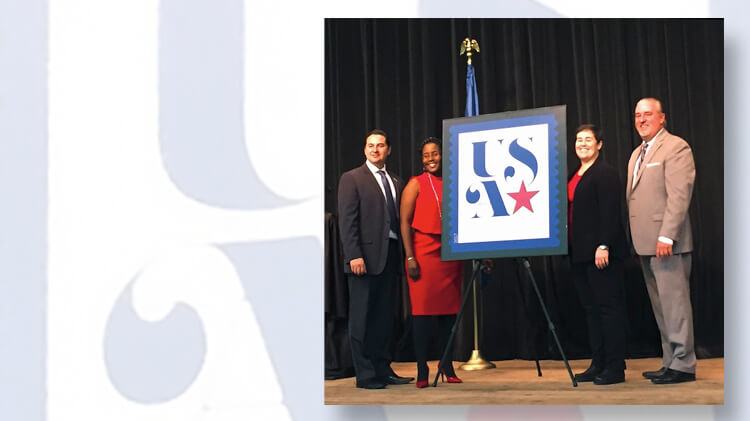 Dignitaries and special guests participate in the first-day ceremony when a new United States stamp is issued. The ceremony for the new USA Star nonprofit coil took place Feb. 10 in Fort Lauderdale, Fla., during the American Stamp Dealers Association’s Wi 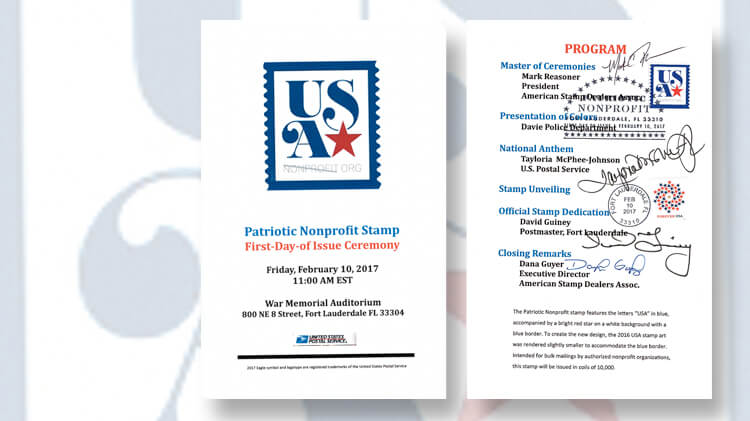 At many first-day ceremonies for United States stamps, the participants will autograph ceremony programs for attendees.
Previous
Next

Many of the letters we find in our mailboxes are solicitations for funds by charitable organizations.

Nonprofit groups that qualify for reduced postage rates often use postage stamps on their mail, hoping to improve the chances that the recipient will open the letter and respond to the donation request.

During the past year, the USA Star stamp for nonprofit mail (Scott 5061) has been offered by the United States Postal Service.

The stamp, issued April 28, 2016, has a nominal value of 5¢, but charities were paying 15.9¢ per letter for certain presorted mailings when these items were taken to the post office.

An example of the stamp used on a cover mailed from the University of Florida is pictured here.

The stamps were offered in large coils of 10,000 stamps, and mailers usually applied them by machine.

U.S. postage rates changed Jan. 22. Forever stamps for first-class letter mail now cost 49¢ instead of 47¢, and rates for other classes of mail also changed: Some went up and others went down.

On Feb. 10, the Postal Service issued a new version of the patriotic nonprofit-rate stamp. The new stamp’s central design is a little smaller than that of the earlier issue, and a blue frame has been added on all sides.

While countless thousands of envelopes have been franked with the original 2016 stamp, I suspect that most have been discarded, because they are considered “junk mail” by many people.

My guess is that few examples of covers franked with this older stamp will be found because it was replaced after less than a year.

A great find is an example franked with a plate-number single, such as the University of Florida envelope pictured. The plate number appears on every 27th stamp in the coil.

The new version of the nonprofit USA Star stamp was issued with a first-day ceremony in Fort Lauderdale, Fla., during the Winter Postage Stamp Show of the American Stamp Dealers Association.

At many first-day ceremonies, Postal Service officials join with invited guests to unveil the design and talk a little bit about the significance of the stamp.

Stamp collectors often ask the people involved in the ceremony to sign the ceremony program, and will create a souvenir by having the stamp canceled with a special commemorative postmark at the ceremony, creating a first-day cover.

Even though you might not be mailing your first-day cover, the rule is that an envelope has to be franked with at least the first-class letter rate of 49¢, so additional stamps needed to be applied to create an FDC of the new nonprofit-rate stamp.

I dug into my collection and came up with a few suitable partners to frank my covers.

Unfortunately, the Postal Service did not have the previous nonprofit rate stamps at the show, and I wasn’t able to find a stamp dealer who had the older 2016 coil on hand. Showing the two stamps together on a single cover would have been a very desirable pairing.

These new stamps are issued only in rolls of 3,000 or 10,000, which is more than most collectors want to add to their collections. Keep in mind that you can’t use these stamps for mailing unless you have an approved USPS permit.

At the first-day ceremony in Fort Lauderdale, you could buy coil strips of 20 stamps.

Be on the lookout for these new stamps on your mail. They represent a lot of hard work by the USPS and their contractors, and the charities that spend much effort looking for support for their causes.

Dan Culbert has been a collector for more than 50 years, and a member of the American Philatelic Society for 26 years. His interests include the United States and Latin America.