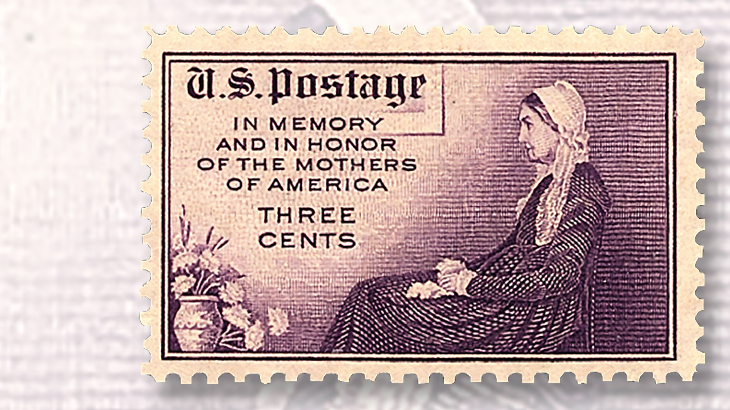 Mother’s Day is Sunday May 14. For collectors of United States stamps, the only stamp issued specifically to honor mothers and their special day is the purple 3¢ commemorative stamp issued in 1934.

The stamp has the distinction of having been designed, at least in part, by a U.S. president.

Brian C. Baur, a collector of U.S. stamps, tells the story of this stamp in his book Franklin D. Roosevelt and the Stamps of the United States 1933-45 (published by Linn’s Stamp News in 1993).

President Franklin D. Roosevelt, a stamp collector in his own right, received a request for a stamp to commemorate the 100th anniversary of the birth of U.S. artist James Abbott McNeill Whistler, and another for a stamp to honor mothers, for mailing cards and letters for Mother’s Day.

FDR combined the two subjects as he took pencil to paper to sketch his proposal for a stamp design. He handed the design to Postmaster General James A. Farley, who, Baur said, was visiting the White House. The date was Feb. 16, 1934.

The sketch showed an inelegant rendition of Whistler’s Arrangement in Grey and Black No. 1, better known as Whistler’s Mother.

Max G. Johl writes in The United States Commemorative Stamps of the 20th Century, Vol. 1, “Seventeen designs were submitted by the Bureau of Engraving and Printing.”

Victor S. McCloskey Jr. designed the stamp, reproducing Whistler’s painting and adding carnations in the lower left corner. McCloskey used Roosevelt’s suggested inscription, “In Memory and in Honor of the Mothers of America,” placing it to the left of the seated subject.

The stamp was engraved by J.C. Benzing (vignette), and E.M. Hall and W.B. Wells (lettering).

The stamp was issued May 2, 1934, but as is often true today, stamps were sold prior to the issue date. Covers exist to document the early releases.

When word got out that one of the press sheets was offered to the Scott Stamp & Coin Co. to be sold, stamp collectors protested.

To calm the protests, Postmaster General Farley ordered a special printing of 20 issues in sheets without gum or perforations to be made available to the public. The special printings, issued in sheets of 400 (Scott 752) or 200 each (753-771), became known as “Farley’s Follies.”

The special imperforate printings were issued March 15, 1935, and included the flat-plate 3¢ Mothers of America stamp (Scott 754).