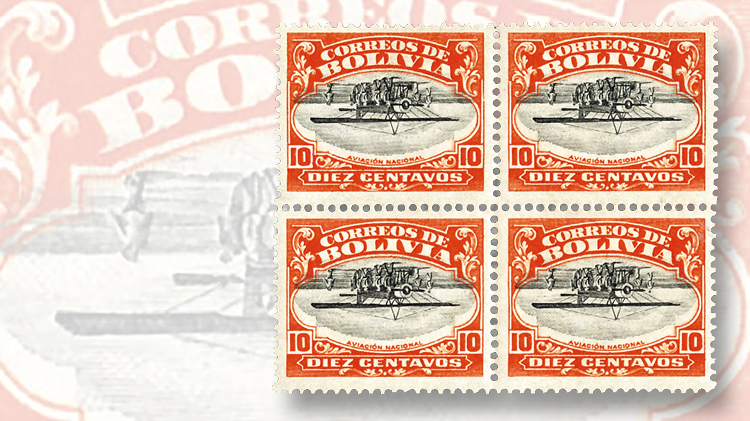 The April 25-26 auction by Cherrystone Philatelic Auctioneers in New York City will include Bolivia’s 1924 10-centavo vermilion and black airmail stamp with center inverted in a block of four (pictured here) and also as a mint single.

Cherrystone Philatelic Auctioneers has scheduled its next sale for April 25-26 at its New York City galleries.

The two-day auction in four sessions includes stamps, proofs, and postal history of the United States, along with material from Europe, South America, and Asia, as single stamps, blocks and sets, postal history, large lots, and collections.

Among the U.S. stamps is a well-centered unused example of the 15¢ black Abraham Lincoln stamp from the 1875 reissue of the 1861-66 issue (Scott 108). The stamp carries its full original gum with a hinge remnant, according to the Cherrystone auction catalog description.

Accompanied by a 2006 certificate from the Philatelic Foundation, the stamp is listed with a $2,500 estimate against its catalog value of $4,500 in the 2018 Scott Standard Postage Stamp Catalogue.

This example, valued at $9,000 in the Scott catalog, includes part of the Bureau of Engraving and Printing inscription in attached top margin selvage. It was authenticated as part of a plate block of six in 2014, and a photocopy of the Professional Stamp Experts certificate comes with it.

The postage due stamp is listed by Cherrystone with an estimate of $5,000.

The country’s first airmail stamps were issued in a set of seven in December 1924.

The 10-centavo vermilion and black stamp is known with the airplane vignette in the center printed upside down in error (Scott C1a).

The error stamp bears some resemblance to the 1918 U.S. Jenny Invert error, but only 50 examples of the Bolivian error were ever discovered, compared to 100 of its famous U.S. cousin.

The Scott catalog value for a single Bolivian invert is $2,500.

The block of four is one of the only two recorded blocks of any size, according to Cherrystone.

The auction offers a nice run of stamps from New Britain, circa 1914, including the “G.R.I.” overprints on previously issued stamps of German New Guinea and Marshall Islands.

Cherrystone offers an unused example of the 1914 3-shilling surcharge on the 3-mark violet-black Marshall Islands Kaiser’s Yacht stamp (New Britain Scott 41), with what the auction firm describes as an unlisted 4-millimeter spacing variety, likely from a later setting.

The regular issue lists in the Scott Classic Specialized Catalogue of Stamps and Covers 1840-1940 for $6,500; the Cherrystone estimate for this variety is $5,000.

The Cherrystone auction offers close to 1,600 lots; the items can be viewed and bids placed online at Cherrystone's website, or on the Stamp Auction Network.