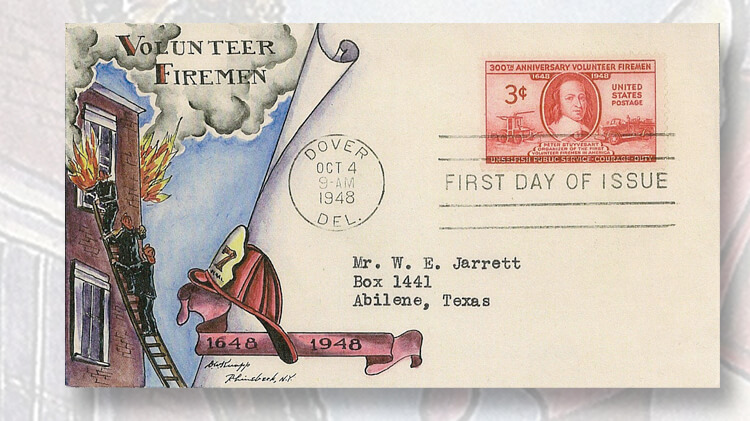 Dorothy Knapp, a teacher in Rhinebeck, N.Y., was a pioneer in hand-painting cacheted first-day covers, from the late 1930s until 1953. This unique cachet for the 1948 3¢ Volunteer Fireman stamp was made on an Adam Bert No. 5 envelope for collector Walter Jarrett. 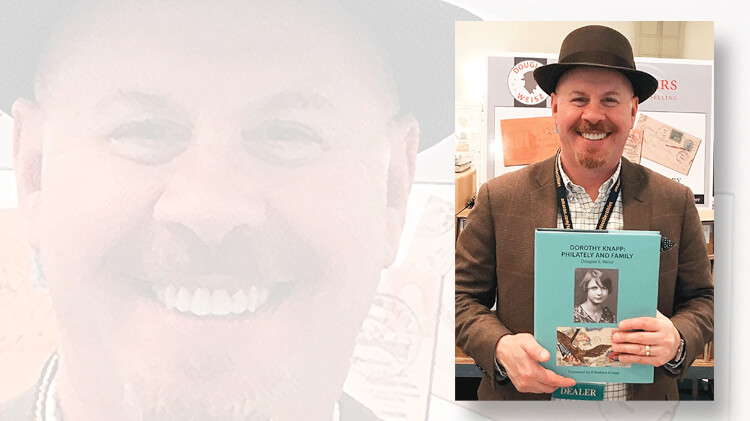 Douglas S. Weisz holds a copy of Dorothy Knapp: Philately and Family, his award-winning book about the famed cachetmaker.
Previous
Next

First-day covers with hand-painted Dorothy Knapp cachets are the gold standard of FDC collecting. Even FDCs with printed Knapp designs are considered better than other cachets of the period.

A recent book paints a picture not only of Knapp’s designs but of the woman herself.

Weisz’s business led him to write the book, which includes not only illustrations of Knapp’s cachet artwork, but also a biography and images of nonphilatelic art she produced on an informal basis.

Weisz told Linn’s that in 2009 he bought “the largest holding of Dorothy Knapp covers ever assembled, by her largest customer,” Walter Jarrett.

“He got 10 of every one of her subscription items in the 1940s. She only did 50,” Weisz noted. This meant that Jarrett had one-fifth of Dorothy Knapp’s entire output in that period.

The Jarrett estate included 1,100 Dorothy Knapp FDCs, as well as FDCs of “other important artists” of the period.

“I could not afford to keep any myself,” Weisz said. “I paid a half-million dollars for the collection. I had to mortgage my home.”

Knapp was a pioneer cachet artist, and her influence remains apparent in FDC collecting today.

“At the time, hand-painting in first day covers was not widely accepted,” Weisz said in an interview with Linn’s. “Some of her subscribers ended up sending them back. They didn’t want hand-painted covers.”

However, Knapp “influenced others to start hand-painting covers,” Weisz said. Not only that, but she influenced the style of mid-20th century cachets.

“She started in the late 1930s, and she worked until 1953,” Weisz said. “She retired because her son Wally was accepted full-scholarship to college, but she didn’t want him to have to work” to pay for school supplies, food, and other necessities.

For that reason, Knapp decided she needed a steadier job, not one that depended on how many stamps the U.S. Post Office Department issued that year.

“Her son’s education was more important to her, so she stopped until 1980,” he said.

In 1978 or 1979, a Lindbergh specialist, Hal Ansink, asked Knapp to produce a one-of-a-kind cachet for his exhibit, and happened to mention that her FDCs were now selling for a few hundred dollars each.

“Dorothy had been giving them away to anyone who called and asked for one,” Weisz said.

Both Knapp and her son had had to retire early because of disabilities, and money was tight.

“As soon as she found out that her covers were worth hundreds, she started painting seriously,” Weisz told Linn’s. Knapp and her son serviced new FDCs, but they also obtained uncacheted FDCs from the 1940s, and she added cachets to them.

Her devotion to her family was also how she first became involved in cachetmaking. She and her husband were teachers in Rhinebeck, N.Y., and he also was a stamp collector and cover approval dealer.

Cachetmaking “was a way for them to share something together,” Weisz said. “They put their desks together so that after school, they could work together.” Weisz said he found that part of the Dorothy Knapp story to be the most heartwarming.

“And when her husband died, she stopped,” Weisz said. “It wasn’t something they could do together anymore. It wasn’t interesting to her. She did it because of family and love.”

The book is available from Amazon and other online booksellers, or through the author’s website.