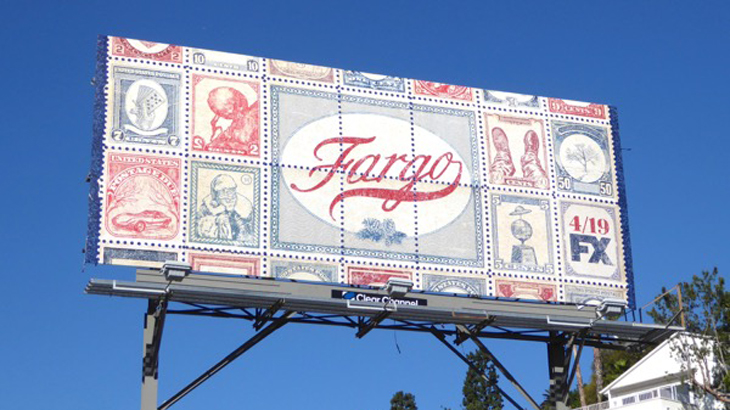 Billboards for the FX series Fargo spotted in Los Angeles in March would definitely catch the eye of any philatelist. (Photo courtesy of Daily Billboard Blog)

Your eyes are not deceiving you — those are indeed vintage stamps decorating billboards promoting FX’s hit series Fargo.

But unfortunately for stamp collectors, they’re not real stamps. Unless we’re forgetting about classic U.S. stamps that featured a poker hand, Sisyphus rolling his giant boulder, and a UFO hovering over planet Earth.

The hit crime drama that plays off the Coen brothers’ 1996 movie of the same name begins its third season April 19. Each season of the show takes on a new plot and features new cast members playing new characters. Among the cast members for Season 3 are Ewan McGregor, Mary Elizabeth Winstead, and Jim Gaffigan.

The stamp-themed billboard was spotted in Los Angeles in March and was reported by Daily Billboard, a blog devoted to everyone’s favorite large, roadside advertisements.

Apparently promotion for Fargo has dabbled in different hobbies before.

"First it was cross-stitch, then quilting and now Fargo's season three key art is a philatelist's dream come true," the Daily Billboard post reads. "But you don't need to be a stamp collector to love this quirky billboard for FX’s Fargo movie spin-off now in its third season."

But fans of the movie know that this is not the first time Fargo has gone philatelic.

A light side plot in the otherwise dark Minnesota-accented film focuses on Norm (played by John Carroll Lynch), the soft-spoken but supportive husband of protagonist police officer Margie Gunderson (Frances McDormand), and his painting of mallards being submitting for consideration in a duck stamp contest.

In the film’s tender final scene — which caps off a 98-minute film focused on a bungled kidnapping plot and its violent consequences — the couple with a baby on the way discuss the results of the contest.

So the new billboards are only the franchise’s latest foray into philately.