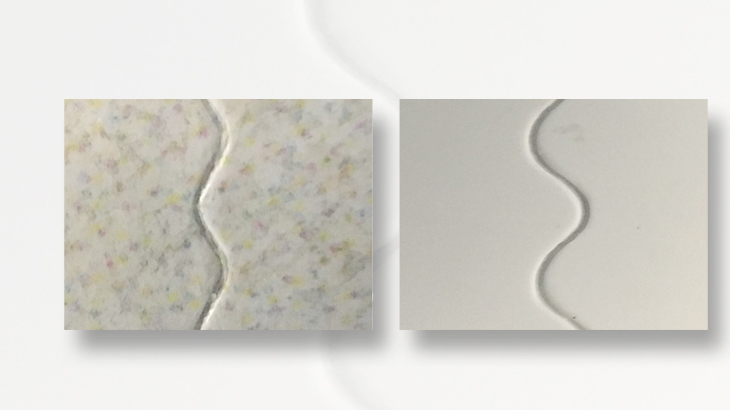 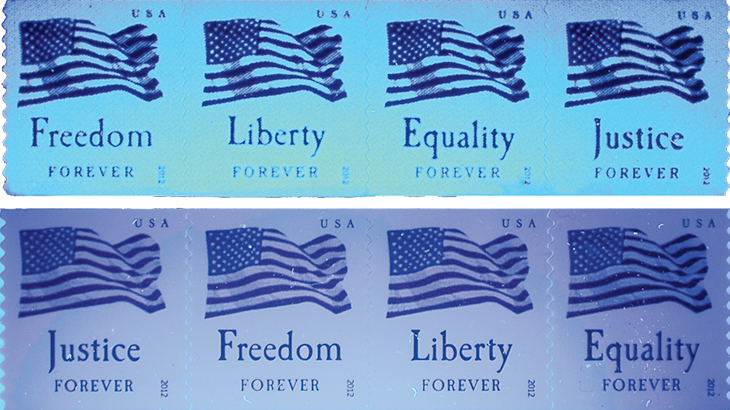 As with all other modern United States counterfeit stamps, the two types of bogus nondenominated (45¢) Four Flags coil stamps are not tagged. When seen under shortwave ultraviolet light, the high-bright paper of the poor-quality counterfeit, top, glows blue, while the paper of the better counterfeit, which lacks brighteners, is nonreactive. 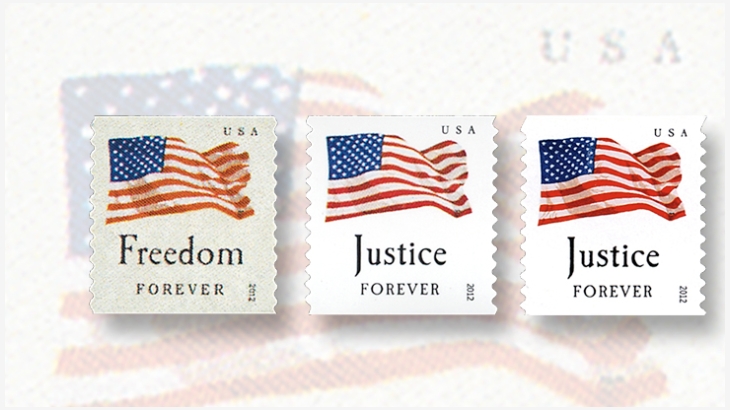 Two counterfeits of one of the three versions of the 2012 United States Four Flags coil stamps — one quite crude, left, and the other very convincing, middle — began appearing on the marketplace in 2014 and 2015, respectively. Both have significant diffrences from a genuine stamp, right.
Previous
Next

One of the three versions of the quartet of United States nondenominated (45¢) Four Flags coil stamps issued in 2012 has fallen victim to counterfeiting.

Like their genuine counterparts, both types of bogus Four Flags coil stamps were printed using offset lithography, an indirect printing method easily susceptible to counterfeiting because the technology is readily available and affordable.

Of the two counterfeit versions of the Sennett-produced Four Flags coil stamps, one is a crude, easily spotted mimic of the genuine issue, while the other is a dead-on lookalike that would fool many collectors.

Thompson said the eBay seller, who operated using the moniker “rmeador,” has not been active on the mammoth Internet auction site “in over a year.”

Reproduced from a very coarse screen shot of genuine stamps, the U.S. flag and inscriptions of the poor-quality counterfeit Four Flags coils exhibit a noticeably grainy appearance, even when viewed without magnification.

Thompson told Linn’s he acquired two rolls of the high-quality counterfeit Four Flags coils from a stamp dealer in October 2015.

Rolls of both counterfeit types, according to Thompson, were “both rolled and wrapped” in a manner similar to genuine rolls from Sennett Security Products.

Both bogus issues come in rolls of 100, but Thompson noted a significant difference.

Rolls of the crude counterfeit coils are assembled from strips of eight stamps joined together with tape affixed to the backing paper, whereas the high-quality counterfeits come in a continuous roll of 100 stamps.

Thompson describes rolls of the low-quality bogus stamps as “poorly done. It looks like there was extra tape here and there. I don’t know why.”

Taking a closer look at both bogus issues, Linn’s discerned other key characteristics that allow the observant collector to separate the fake from the real.

1. The grayish background of the poor-quality counterfeits, when viewed under 60x magnification, shows a loose pattern of blue, red, and yellow dots.

3. When viewed under shortwave ultraviolet light, the high-bright paper of the crude counterfeits glows blue; the more convincing counterfeits do not glow because they are not printed on high-bright paper. Genuine stamps show the typical yellow-green glow from the prephosphored (tagged) paper.

4. Under shortwave UV light, the reactivity of the backing paper is reversed: dead for the poor bogus stamps, and blue for the high-quality counterfeits.

5. The red stripes of the U.S. Flag on both counterfeit types are thinner than those on genuine stamps.

When compared side-by-side, the high-quality counterfeits look like an exact match with the real stamps. When magnified 60 times, however, the coarse dot pattern of the flag on the bogus stamps is readily distinguishable from the pattern on genuine stamps.

7. Both counterfeit types lack the clear, legible microprinted “USPS” that appears just above and to the far right of the flag’s bottom red stripe on genuine stamps. On both counterfeits, the microprinting is indistinct.

The counterfeiters did get one thing right with both bogus issues: They are perforated gauge 11 like their genuine counterparts.

In addition, the better-quality counterfeit Four Flag coils have the slanted, straight-line die cut at top and bottom on both sides, what Thompson refers to as a “separator die cut.”

This separator marks the location where, during the finishing process, the die-cutting mats apply the top and bottom straightedge cuts between the rows of stamps on the printed web (continuous roll) of stamp paper.

Of the two Four Flags counterfeits, the better-quality bogus stamps are much more likely to fool both collectors and postal customers.

Thompson described the crude counterfeits as being of “very poor quality,” executed by counterfeiters who “do not show any sophistication.”

Doug Iams, a specialist of U.S. booklet, coil, and test stamps, also alerted Linn’s about the bogus Four Flags coils. He dismissed the poor-quality fakes as a “total amateur-hour job.”

The better-quality bogus Four Flags coils, in contrast, are the product of a more sophisticated operation.

“It took someone with some skills for the quality of the printing, the continuous paper (full roll) and the die cutting,” Thompson said. “The die cutting was smooth, clean and regular.”

At present, it appears that both counterfeit types have not seen extensive use.

“Both are from the same stamp dealer and both used a fake stamp as postage. The dealer that these covers are from is not the same dealer that I bought my rolls from.”

Linn’s ongoing investigation into the murky origins of the Four Flags and other recent counterfeits, which began in early February, suggests that the problem is larger than initially thought.