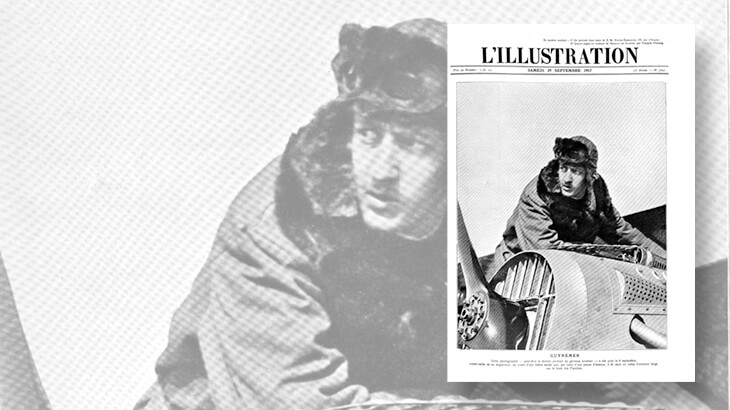 Unraveling the origins of the design of the Georges Guynemer stamp of 1940 leads to this 1917 photograph, taken only two days before the military flyer disappeared in combat.

Originally intended as one design of a 1940 semipostal set, Georges Guynemer, heroic aviator of World War I, received a regular-issue postage stamp.
Previous
Next

It’s difficult to overestimate the contemporary French public’s admiration for Georges Guynemer, the national hero and fighter pilot known as “the Winged Sword of France” during World War I.

France’s Rene Fonck was number one as far as aerial victories, but despite his 75 successes he was viewed as a self-serving braggart. Guynemer had 53 or 54 victories (depending on the source), but the physically small, frail and very young aviator was first in the hearts of his countrymen when he vanished in action in 1917.

Georges Marie Ludovic Jules Guynemer was born Dec. 24, 1894, into a wealthy family of aristocratic heritage and was sickly from childhood into young adulthood. Rejected for military service at age 20, he persisted until acceptance as an apprentice mechanic at the aviation school at Pau. After sweeping the garage and changing cylinders from August 1914 until the following January, Guynemer was accepted as an apprentice pilot.

Natural talent and drive propelled him through flight training, and he was licensed in mid-March 1915, joining the Escadrille (squadron) MS.3 in June. He had his first aerial victory July 19, 1915, and received his first medal. Eventually, he was awarded the Croix de Guerre, the Legion of Honor, and distinguished service medals from half a dozen nations.

By December 1915, the squadron was flying new airplanes, Nieuport 10 fighters, and renamed Escadrille N.3, known as the Storks. Guynemer had his fifth victory in February 1916, was promoted to lieutenant in March, and soon after to captain. By the end of 1916, he had 25 victories and was so influential the company making Spad fighter planes developed two new models based on his advice.

Flying a Spad VII Feb. 8, 1917, Guynemer became the first Allied pilot to shoot down a German twin-engine, heavy bomber plane. In May 1917, he brought his victory total to 45, and his father urged him to switch from flying to training pilots. He refused, not wanting to be accused of quitting because he had won all the awards.

Guynemer definitely was not a quitter; one of his famous sayings was, “If one has not given everything, one has given nothing.” He continued to fly, despite suffering from tuberculosis and what is now called post-traumatic stress disorder.

Around 8:30 on the foggy morning of Sept. 11, 1917, Guynemer took off from Dunkirk, after which the story becomes unclear. The one certainty is that the 22-year-old aviator did not come back.

Lt. Jean Bozon-Verduraz had taken off with Guynemer and returned to Dunkirk several hours later. He reported seeing Guynemer pursuing a German observation aircraft, but then became distracted by his own battle with several Fokker planes. On Sept. 25, the French War Department in Paris officially announced that Guynemer was missing in action.

A German pilot shot down behind Canadian lines and captured Sept. 29 swore he had witnessed the crash of Guynemer’s plane and saw his corpse, with a bullet wound in the head and other injuries. The prisoner said the Germans who found Guynemer were driven away by Allied artillery fire before they could bury or remove his remains.

An American Red Cross report said, based on information received, the death of Capt. Guynemer was definitely confirmed, and had taken place at Poelcapelle, in Flanders, Belgium, about five miles northeast of Ypres.

The Red Cross said identification was made from a photograph on the license found in the aviator’s pocket, and according to a Belgian who had escaped the Germans, “burial took place at Brussels in the presence of a guard of honor, composed of the 5th Prussian Division.”

Burial was intended at Poelcapelle, but bombing preceding the British attack at Ypres led the burial party to flee, taking the body with them to Brussels in a special funeral car. This tale includes details about floral tributes and volleys of rifle salutes, but omits the location of the alleged gravesite.

No traces of Guynemer’s body or his airplane were ever found, and some found it impossible to believe that the heroic airman truly was gone.

A newspaper in Logansport, Ind., printed a story March 6, 1918, datelined Paris, Feb. 15, stating that “the intelligence bureau here” believed Guynemer was a prisoner in Germany, injured in the crash of his plane and “confined in the hospital of a German fortress near the Russian front.”

Officially, hope was given up months earlier. On Oct. 19, 1917, the French legislature eulogized Guynemer at length, and unanimously voted to mount a plaque in his honor in the Pantheon in Paris, where some of France’s greatest luminaries are buried or memorialized. The plaque calls Guynemer “the purest symbol of national ideals, for his indomitable tenacity of purpose, his ferocious verve and sublime gallantry” [translation].

Replying to a query from the Spanish ambassador, the German Foreign Office stated Nov. 8, 1917, that Georges Guynemer had crashed near Poelcapelle at 10 a.m. on Sept. 11. His body, identified by a surgeon, had sustained injuries including a bullet wound in the head and a broken leg. “The sector authorities communicate that the shelling had plowed up the entire district,” the German officials said, “and that no trace could be found on September 12 of either the body or the machine.”

The grim truth is that Guynemer is among the several hundred-thousands of French, German, and British soldiers whose remains are still officially missing in Flanders.

World War I was not, of course, the “war to end all wars,” and on June 14, 1940, the Germans entered Paris and France was under Nazi occupation. In World War I, the French government had encouraged public adulation of young, handsome Georges Guynemer as a means of boosting morale. Guynemer had never been forgotten, and postal officials seem to have decided, in 1940, he was needed again to lift morale and inspire the people.

The History of the Georges Guynemer Stamp

A two-volume collaboration, published in 1998-99 under the direction of Jean-Francois Brun, titled Le Patrimoine du Timbre-Post Francais (Heritage of the French Postage Stamp) gives the history of the stamp issued in autumn 1940 to honor Georges Guynemer (Scott 396).

The original intent was to include a Guynemer stamp in a set of semipostal stamps issued May 1, 1940, whose surtax would fund war charities. A design was prepared with a denomination of 1 franc (+50 centimes), but the decision was made to focus the set instead on World War I heroes who became marshals of France.

Thus, the designs portray Joseph J.C. Joffre (Scott B97), Ferdinand Foche (B98), Joseph S. Gallieni (B99), and, incongruously, a roughly drawn design of a woman behind a plow pulled by oxen (B100).

“A group of German philatelic officials protested against the appearance of a stamp honoring a hero of the struggle against Germany, during the time of the occupation,” Le Patrimoine states [translation]. But the decision had been made before the German occupation, and the stamp had been issued by the time the protest was made, so the matter ended there.

The stamp’s vignette usually is described as designed and engraved by Achille Ouvre (1872-1951), who began designing French stamps at the age of 62, and based on an oil painting in France’s national military museum, Le Musee de l’Armee in Paris. The museum lists the 1919 painting as a posthumous portrait of Guynemer, the work of “J. Cousin Lawrence.” The correct name is John Cousins Lawrence, a British painter.

Thanks to the Internet, it has been possible to piece together the rest of the story of this Guynemer image.

Lawrence’s portrait actually was a very literal rendering in oils of a photograph of the aviator, published in the magazine L’Illustration of Sept. 29, 1917.

The caption [translated] reads, “This photograph — perhaps the last portrait of the glorious aviator — was taken on September 9, two days before his disappearance, during a brief stopover which, as a result of a gasoline breakdown, he made in a Belgian aviation camp on the Flanders front.”

(The magazine in question has been digitized and is available for public use through the Hathi Trust website.)

Further, the Gossip Shop column in The Bookman: A Review of Books and Life, April 1919, noted the following: “The American publishers of Bordeaux’s Georges Guynemer: Knight of the Air have sent the Gossip Shop a photograph of a life-size portrait in oils painted by J. Cousins Lawrence (silver medalist of the London Academy and president of the Portsmouth Art Society) from ‘a small snapshot taken two days before Guynemer’s last flight.’ France has accepted the gift of this portrait, which will hang in the Le Musee de l’Armee at Paris. The Guynemer family say it resembles the original more than any likeness they have.”

Considering the quantity printed, the values cited for the Guynemer stamp in the 2017 Scott Classic Specialized Catalogue of Stamps and Covers 1840-1940 are somewhat surprising: $16 for a mint example and $9 for used; $77.50 on cover, and $240 on cover as a single franking.

In relevant anniversary years, France has saluted Georges Guynemer, the nation’s “Winged Sword” of World War I. There surely will be a ceremony this Sept. 11 for the centenary of the death of one of France’s most esteemed heroes.