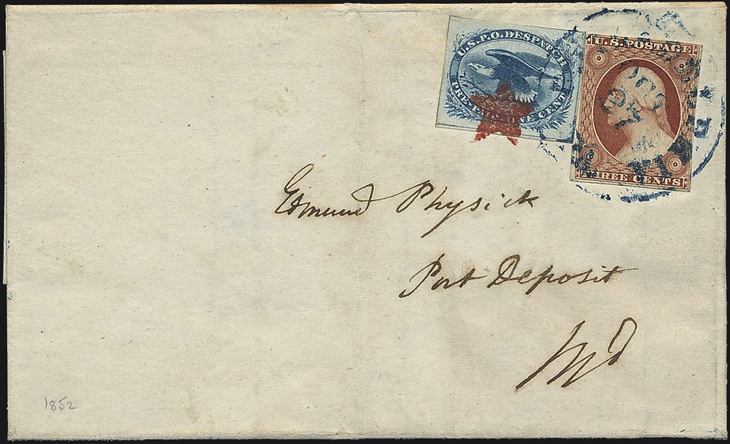 Lurking among the United States offerings in the March 3-4 Auction Galleries Hamburg sale was this splendid 1852 cover featuring a 3¢ Washington and 1¢ Eagle carrier’s stamp tied by contrasting blue and red postmarks. It sold for a relatively modest $455.

Does anyone still need to be persuaded that hunting on the Internet for new and interesting items for their collection is worth the time and effort? Hopefully not.

The truth is that bidding in online auctions is quick and easy. And the beauty of doing so is this: Sometimes the loveliest pieces turn up in the unlikeliest of places.

A recent example came up in a sale March 3-4 by Auction Galleries Hamburg, known until recently as Schwanke GmbH.

Tucked away amid the 3,700 lots of German, European, and worldwide single stamps, covers, and collections were 30 or so lots from the “Vereinigte Staaten von Amerika,” or United States of America.

Seeking out U.S. items overseas can be especially rewarding, because the competition tends to be less intense, and therefore the bidding is lower.

It would be a mistake to get discouraged by the Auction Galleries Hamburg lot descriptions, which are in German.

Though a robotic translation from Google or some other service can be as confusing as it is edifying, the pictures often say all that needs to be said about an item.

And it’s a safe bet that any European auction house can provide basic customer service in English, such as responding to an email query for clarification.

The Zeppelin plate blocks mentioned in the Linn’s March 6 preview of the Hamburg sale unfortunately did not find a buyer, but several other U.S. items did, including what might just be one of the prettiest covers of all time.

Hamburg did not identify the imperforate 3¢ 1851 George Washington by catalog number.

Identifications are not always easy to do from an online scan, but the stamp appears to be a Type II, with a recut inner frame line.

The cover is postmarked Oct. 27, and a pencil notation at lower left gives a year of 1852, perhaps based on the contents. If that date is correct, it would make the stamp more likely to be the more common dull red shade (Scott 11A), although there’s a small possibility it could be the more desirable claret or brown-orange.

Alongside the 3¢, tied by the Philadelphia datestamp and also by a nifty, solid red star, is a 1¢ Eagle carrier’s stamp (Scott LO2) — a type of U.S. Official stamp that paid the extra fee for delivering a letter to a local post office in the days before there were mailboxes on every other street corner.

Between the red-white-and-blue color combo, the iconography of the stamps, the jaunty angle at which they are placed, and the overall neatness of the cover, this might just be one of the most eye-appealing items in all of philately.

Some lucky buyer took it home with a bid of €350, or about $455 including the 22 percent buyer’s commission levied by Hamburg.